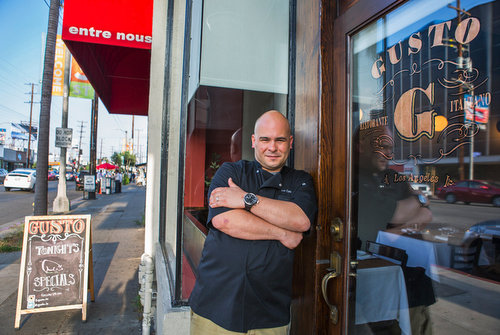 Vic Casanova, chef and owner of Gusto, got his start in L.A. at Culina, a fancy Cal-Italian restaurant at the Four Seasons in Beverly Hills. After departing the expansive confines of the hotel, Casanova staked out on his own at a diminutive room on West Third Street within a bustling center of restaurant activity in the city. Since opening about one year ago, Casanova's Gusto has earned both local and national accolades by focusing on prime quality ingredients and solid, trusted techniques that result in consistently great Italian cuisine. Eater sits down with Casanova to talk about some of the early challenges and steady developments the kitchen has undertaken over the past year.

How did you come across this location? It was on the way home. One day I was passing by and literally stopped in to ask the people running it if it was for sale. I came back with my wife and had dinner here, and we could both see a lot of potential in the space. At first the owners of the previous restaurant didn't take the offer too well, but a few days later they called me back and the deal was done.

What was the original concept of Gusto? I wanted to cook in a more intimate place for people, with a no-holds-barred Italian sensibility. Gusto translates to "taste" in Italian, so I wanted it to be all about the food. At first it was about simple, bold Italian soul food. After working in restaurants for 23 years, I wanted to break the rules a little bit. I wanted to make food that people like to eat. 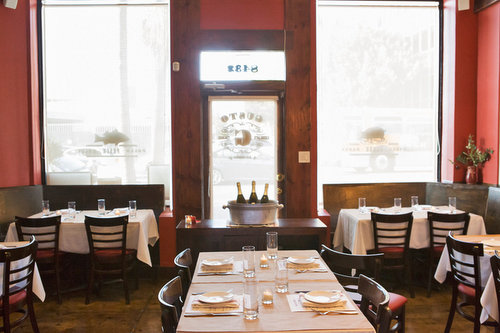 What was it like going from a place like Culina to this? Culina was very ambitious, a five star type environment. But in the end it was tough because the main goal of the restaurant was to make the hotel guests happy. A lot of chefs could be held back by that. Gusto is about being completely off the cuff. We'll get a new ingredient in, we'll test it that day, and will run live it that evening. From the beginning I knew we'd get ingredients that I wouldn't serve in a Culina-type environment.

How was the build-out? We did everything on a shoe-string. My wife decorated the room, picked the lights, colors, and even did the painting. We hired a simple graphic designer for our logos and branding. Everything came out of necessity; take these white tablecloths for example. While most people aren't using tablecloths around town — we had them not to seem fancy but because we didn't like how the tabletops looked and we couldn't afford to get new ones. So then to make things feel more casual we put craft paper on top of it. We didn't want the room to seem over-designed.

Do you try to adhere to Italian cuisine as much as possible? We don't really follow the rules of vege, starch and protein. If it doesn't work, we don't put it on the plate. We want all the dishes to be gusty and bold. Everything is small-production, made from scratch every day. The vendors are top-notch. The pasta program is intense, everything is hand-crafted. I have three to four guys in the back and that's it.

What changed in the first month? There were definitely business things that came up — we felt like the menu was too large to be consistent with the concept. We wanted to do things that were relevant and in season, so in order to do that the menu had to be smaller. Everything had to be super fresh so we had to tighten up the menu. I don't understand how other places say they're farm to table when there's 30-45 items on the menu. What's getting lost there? 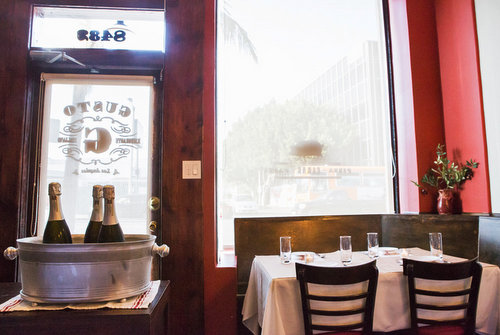 What about six months in, what kind of adjustments did you have to make? We definitely got really aggressive on the wine list. I feel like in the first year you want people to really taste the food and see how they respond. I felt like the wine got a little overshadowed even though I felt the wine program was really fantastic. Now we're trying to showcase wine culture in Italy. It takes more time to train, taste, and get people to be comfortable with what we're doing. I feel like we're ambassadors in one sense, so we're excited about it.

How was it getting all the positive press? It's very humbling. Alton Brown came in one night and then tweeted that "Gusto rocks, you guys are on fire." It was great getting an endorsement from Irene Virbila of the LA Times. The review was killer, she didn't point out any flaws. The next big thing was getting named one of the 20 Best New Restaurants by Esquire Magazine — it was huge, a big deal.

What's the best thing on the menu right now? The polipo (baby octopus) is a longtime dish, and we sell a ton of them. They're delicious, soulful, and done just right. There's a bright lemony tang, creamy cannelloni beans. and harissa for a North African flair. Artichokes are in season so they're great fried and served with a really bright gremolata, lemon zest, and toasted bread crumbs. Pasta-wise, the agnolotti is a joke. People order it, and then order it again with the entrees. We have a guy in the morning come in during prep and all he does is make agnolotti. The spaghetti nero is great, we have very fresh sea urchin, use fresh in-house pasta, add extra virgin olive oil, calabrian chiles, a splash of wine, and then toss it together — the uni basically emulsifies into the sauce, then we top it with a whole piece of sea urchin and some anchovy breadcrumbs.

Does it feel like it's been a year? I've seen a lot and done a lot. When you open up, you just want to make it to one year. If you go to three years, you know you'll make it. It feels like it's been a fantastic year, but I'm excited about what's to come because I feel like it keeps getting better. 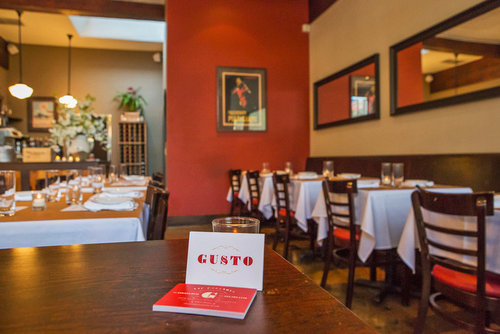 What's next for you and Gusto? There have been some consulting projects — the phone doesn't stop ringing. The opportunities will always be there but in the end we can never stop listening to our guests or our team. When you run a restaurant like this there's no room for error. The goal is really to be the best Italian restaurant in the city. Eventually we'll think about increasing the size of the space and bring on more talented people. I learned from Jon Shook of Animal and nearby Son of a Gun to go slow. It was good advise, to make strategic moves. In the end, everything you do has to be about passion and heart — there's no compromise.