Welcome to One Year In, a feature in which Eater chats with the chefs and owners of restaurants celebrating their one year anniversary. 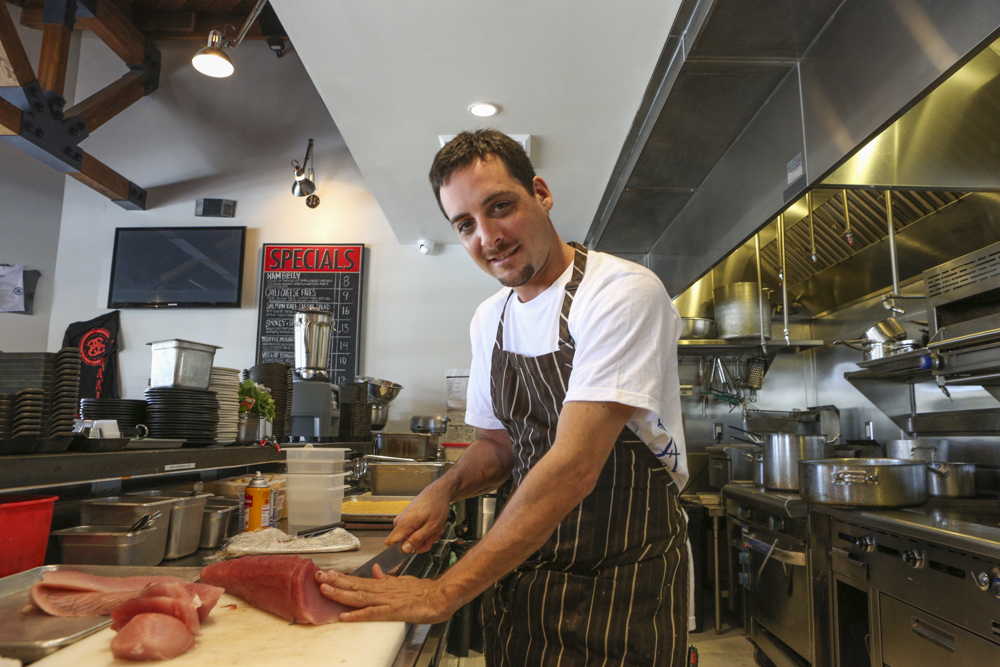 Plan Check opened quietly about a year ago on the northern edge of Little Osaka's Sawtelle, just a block away from the actual City Building and Safety Building often referred to by builders and restaurateurs as "plan check." Ever since Terry Heller and chef Ernesto Uchimura opened their ode to American comfort food, the entire neighborhood has exploded as one of the top restaurant destinations in the city. Formerly the corporate executive chef of Umami Burger, Uchimura oversaw the transformation of a modest burger restaurant to a multi-million dollar company. At Plan Check, he's refined the simple, but unique burgers and other dishes over the past year, accommodating unusual requests at times, and progressing with two new locations in the next year.

How did this opportunity come about? When I left Umami, Terry Heller had heard that I was a free agent. I came down here, checked out the space. They had signed the lease and were in the process of getting a liquor license. I took a look around and thought it would be a good fit. I grew up nearby in Culver City and came to the neighborhood to go to Japanese school so I was familiar with Sawtelle. I thought it was missing a couple of things, like a gastropub and burger restaurant that served craft beer so it sounded like a good opportunity.

What was the build out like? I was here during the whole construction. The place was designed when I came onboard, I redesigned it a bit, especially the kitchen. I made it more efficient to fit my style. It took about six months, not too bad. We got it up and running quick. I took an apartment nearby and starting doing recipe development out of my kitchen. So I was able to work on the menu and nail everything down. 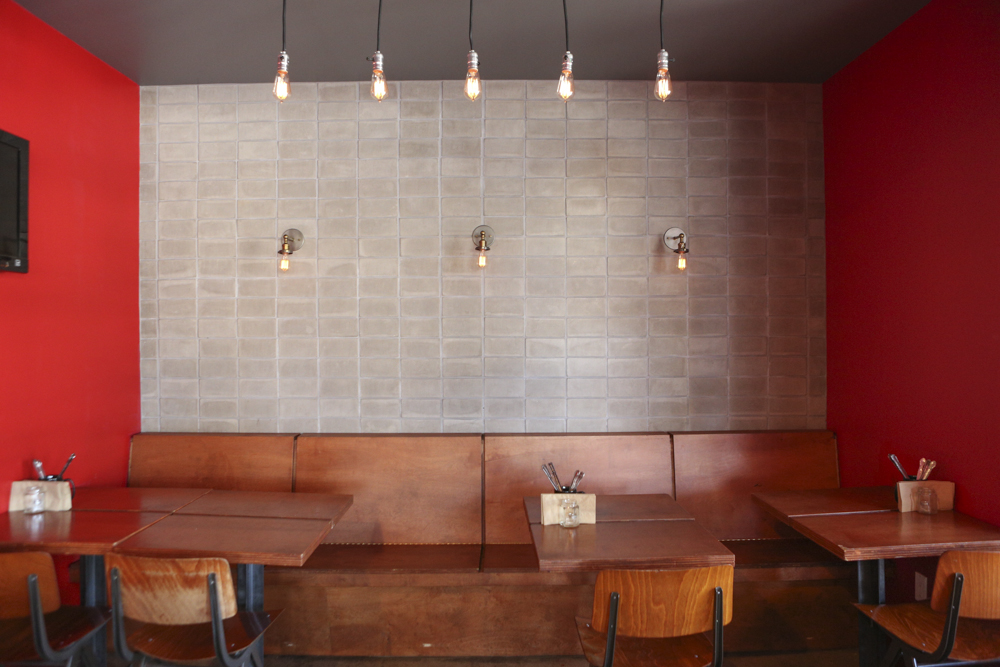 What did you see the initial concept as, especially since you came from Umami? I saw this as a place that served modern American comfort food. I wanted to make food that people would crave and would come back multiple times a week for. Mainly because we're a neighborhood restaurant, I really wanted to cater to people that live nearby. People that come from out of the area are just icing on the cake. I wanted to do some comfort food utilizing modern techniques and interesting ingredients. Just flip the comfort foods a little bit, but still maintain craveability. I'd been messing around with fried chicken for a couple of years so I knew I wanted to do that.

How have people in the neighborhood taken to it? We have so many regulars here, it's such a huge part of our business. They recognize the servers. We get a lot of families here, which is really important too. We get the kids hooked — the next generation of customers.

What changed in the first month? On the menu, not much because we had so much time to figure things out. There were a few tweaks but nothing major. In terms of service and the beverage program, our original GM left and since then we've gone through a couple GMs. Initially we reduced the wine inventory which our first GM had set up. We've since added more craft beer and improved our Japanese whiskey program.

What about after six months? We started doing more seasonal items and specials for our regulars. We have almost this secret menu with things like the truffle mushroom swiss burger. We added the Jidori chicken patty for people that don't eat beef. We have a changing selection of doughnuts, for example the strawberry one right now. We'll change up the cheeses and charcuterie based on what interests me. 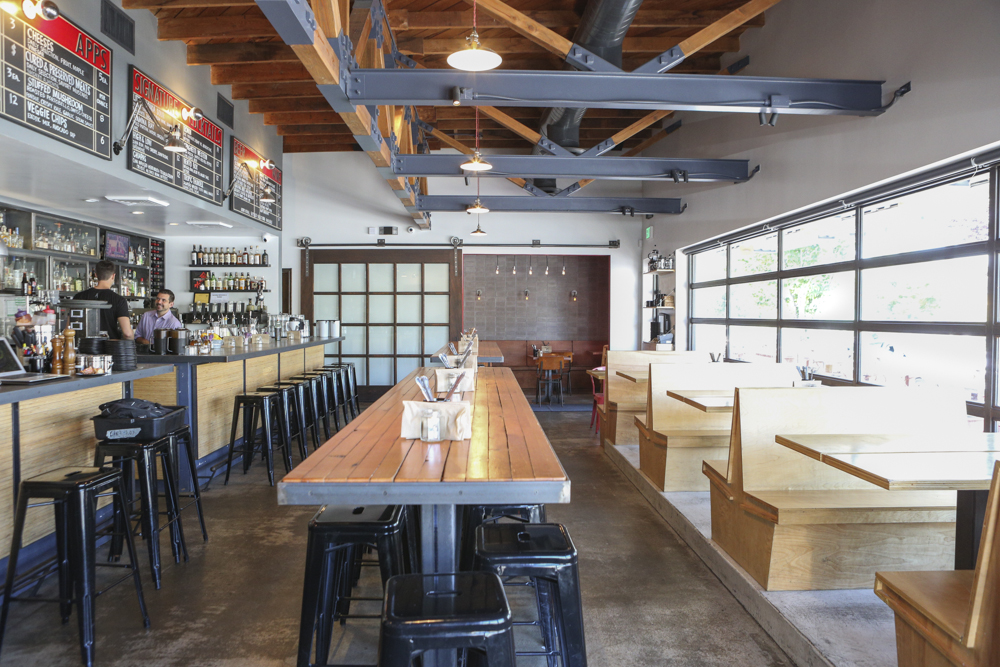 How has the press coverage been beneficial over the past year? The visibility is greater and it gets people talking. We've had all kinds of press, it seems like we get something almost every week and it keeps the momentum going. It's been busy since day one, but we've also had a slow uptick in business as well. We're pretty close to capacity.

It seems like you're really accommodating here. We try to cater to everyone. We want to be super friendly. We're not in Hollywood, some neighborhoods have to be more stuffy or overcharge people. We want to say yes, almost like the opposite of Father's Office or Umami. 99% of the time I'll say yes to anything. We'll even grill up patties for dogs, or serve marrow bones for dogs on the patio.

Is there anything you won't do? If we're crushed on the line and somebody asked for something wacky or crazy, we won't accommodate it. Some people have asked for a beef patty with a piece of fried chicken on top and more.

Someone's actually asked for that? I think some people that come here are stoners and ask for that. It's nuts. I'll get a really long ticket but it's just like two items with a bunch of modifications.

What are the best things on the menu? The three signature items. The PCB (Plan Check Burger) is really an ode to the McDonald's hamburger. The smokey fried chicken which we won an award for last year took us to a whole other level at food events. I've been messing around with fried chicken forever. I love the short rib pot roast. We use a ton of red wine and some port wine to braise it. Then we make the turnover pie, so the dish is essentially a hybrid of two dishes, a pot pie and pot roast. The mirepoix is sweet and sour, so it cuts through all the fatty richness.

When the chicken hits the fryer in this video, it's one of the most glorious things ever. What was the inspiration behind the fried chicken? I did everything I could, tried every style — Japanese, southern, used different marinades and brines. This version starts with a cold-smoked chicken that's put in buttermilk brine, then gets a dredge in rice flour that gives it a nice crunch. We fry it in beef tallow. I preferred lard, but I have too many Jewish investors so I didn't want to alienate them. I really wanted to try chicken schmaltz but it would've been too difficult to render that. Not to mention that it has a low smoke point.

Has it felt like a year? Yes and no. It feels like I've been grinding at it for a long time, but then it went by quickly.

You have two projects right now. Was the intention to open multiple spots like Umami? Yes. We designed everything to scale. It's a very tight, small menu. We do a lot of specials and that's going to be my way to attract culinary talent. There will be a core menu at each location, but whoever the chef is can do what they want to do in terms of specials. We're in this business not just to manage but to be craftsman and show our skills. I knew I wanted to have something scalable — I have the experience and that seems to be the trend with restaurants. I wanted to create food that would work anywhere: LA, New York, the Midwest, anywhere.

What's going on with Plan Check on Fairfax? It'll be open in about six months. It's a little bit bigger than this location. We'll have a double-sided bar.

And Downtown? It's currently being built out. It's a brand new building. When we opened here on Sawtelle, we felt like we had a great impact for the neighborhood. We're hoping for the same thing there. I'm confident it's going to work. We're about twelve months from opening there. It's about the same size as Fairfax but doesn't have as many seats.

What about future places? We're looking for other spaces, especially the Valley. I like to take whatever's interesting. I work from my gut, if I have a good feeling, I usually go with it. As long as the space fits our needs.

Would you ever do another concept? I've been working on a non-burger restaurant. I have an idea for a restaurant based on our fried chicken. I'm also thinking of doing a doughnut spot. Eventually I want to do a higher-end, dinner only place.
·All Plan Check Coverage [~ELA~]