Zak Fishman landed in L.A. not long ago by way of Mile End Deli in Brooklyn, NY. Now he's the General Manager at Bludso's Bar & Que, the hottest barbecue restaurant in the city thanks to the efforts of Golden State founders James Starr and Jason Bernstein, as well as Bludso's (Compton) creator Kevin Bludso. Chef Noah Galuten helms the smoker at the La Brea location, overseeing a simple, Texas-style barbecue that's been packed since day one. Eater chats with Fishman to find out how to navigate the waits and how he deals with occasionally frustrated diners.

When did you get involved with Bludso's? Toward the end of the construction process, just about when they were putting in the finishing touches and they were ready to hire a GM.

Do you take reservations? Only for parties of eight or more. Everything else is walk-in.

What's the typical wait for a party of four on Saturday at 7:30 p.m.? About 20-30 minutes. The beauty of the floorplan that we have at Bludso's is that it's really modular, which makes it pretty easy to adjust so that people don't wait too long.

What's the longest wait that you've had so far? When we first opened the wait was upwards of an hour and a half.

How can someone reduce the wait time? It's always recommended that you come a little bit earlier than you want to. That way if there's a wait you can grab a drink at the bar. It's a beautiful bar and a great place to hang out. That's something that LA hasn't really had that is a common experience in New York, getting a drink at the bar. There are so many places in Brooklyn that don't take reservations, so everyone's kind of on the same playing field. You don't have to worry about getting a reservation. I like the idea that everyone has an equal chance of getting a table, you just have to come a little bit early.

Did you have any input on the final concept? When I got here it was pretty fleshed out. I knew about the original Bludso's in Compton but I'd never been. I knew what Jason and James wanted to do from a front-of-house perspective. We just tweaked a few things in the way that we were going to do service since the format in L.A. is different than in Compton.

What's the key to the front-of-house experience? We tell our staff that on a basic level, their job is just to be nice to customers. Treat people really nicely, be warm, and friendly. We want people to feel welcome and taken care of. We wanted service to be excellent despite being a barbecue place, which is generally very casual.

What are your regulars like? We were all really interested to see how it would turn out. We wanted to see what a barbecue regular looks like and we found that it's just like regulars at any restaurant. Most are locals from the neighborhood that love food. From the first week, there were people coming in three to four times a week, which was a pleasant surprise for us.

You've worked for a while in New York. What's the main difference between L.A. and NYC, especially Brooklyn, diners? The cities are so different and the dining scenes are so different. People have different priorities. In L.A. parking is tough and it can be really frustrating, so parking and valet is really important. In Brooklyn you can walk. People in L.A. aren't as used to waiting for tables.

What have people been frustrated with and how have you dealt with that? We've had a few people that've gotten upset about certain things and those are actually some of my favorite times in the restaurant. It's a chance for me to really do my job. As a GM, you have to remember that people are coming to you at their weakest moment. They've probably been driving all day, in traffic; they're hungry and upset because they have to wait. When you start out by saying that you understand them and know why they're angry, and then get to take care of them. Too often the communication breaks down when they're upset. We'll often send the customers to the bar, tell them we'll make it worth their while. They often leave as our happiest customers after they get some food and drinks.

What about some of the early Yelp reviews? How have you guys taken that? Yelp can be frustrating at times because it doesn't feel like a conversation. But, honestly I try to use Yelp as a way to generate feedback. There were some comments about the valet and we were able to address that early on, so we called the valet company and told them they needed to do a better job. I got to get a better idea of valet works in the end – it's fascinating actually. 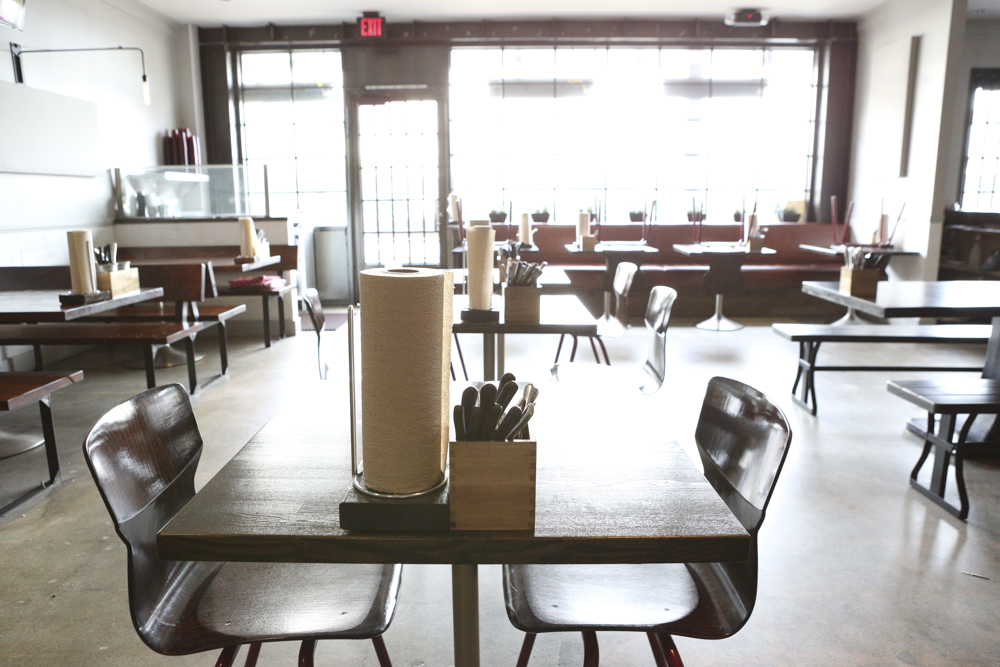 What's the best table in the restaurant? That's a tough one. I'm going to say that the bar is the best place to sit.

What's your favorite thing on the menu right now? Probably the rib tips. Not every barbecue place has them. They're incredibly meaty. A really delicious piece.

What style of barbecue would you say Bludso's is? Texas-style – heavy on the rub, sauce on the side. We're not trying to re-invent barbecue. We're just trying to honor Kevin Bludso's traditions, which is Texas, filtered through Compton. One of the best things about this job is having the opportunity to spend time in Compton. It's a working-class neighborhood that's got a bad wrap. It's full of great people, and it's been great getting to know the scene.

Where do like to eat outside of the restaurant? I recently went to Chi Spacca and was blown away by what they're doing there. I grew up in L.A., so I missed all my ethnic places like Sri Siam out in the Valley and 101 Noodle Express. I do miss restaurants in New York because of all the history they tend to carry, but I've missed being able to grab a burrito, banh mi, bowl of pho or tacos so that's nice.

What's in store for the future at Bludso's? We're pretty focused on this location; we want to make it as good as it can be so we're not looking to far into the future right now. As for the menu, we're working on a late-night menu that'll be awesome. We're not going to do normal barbecue items, they'll be different.