Share All sharing options for: The Eater Young Guns Class of 2013 REVEALED

Ladies and gentleman, it is time. We are pleased to announce the Eater Young Guns Class of 2013, a group of 15 of the most distinguished young chefs, restaurateurs, sommeliers, and hospitality industry professionals in the country. These are the junior statesmen of the culinary world who have most distinguished themselves this year, and who are its next stars. Over the past two months, you've met many of them, and you'll meet the rest this week. 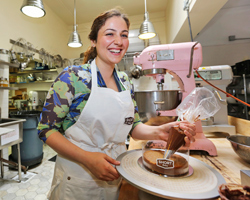 What she does: Pastry Chef, Short Cake, Los Angeles, CA

The Eater Young Guns Class of 2013 will be celebrated at a gala event in Los Angeles on Monday, June 24. Young Guns Eve, a public tasting event featuring many of the winning chefs, goes down the night before on June 23. Tickets are still available.

Head over to Eater National to learn more about all the winners. >>