Have at Look Inside Mari Vanna, Opening June 25

Share All sharing options for: Have at Look Inside Mari Vanna, Opening June 25

Mari Vanna, the Russian chainlet bedecked with shabby-chic odds and ends and decorated with florals reminiscent of your grandmother's sofa, has been teasing its debut with a bunch of preview parties. Though for the public, Mari Vanna opens on June 25. You'd almost expect to see someone knitting in a corner, but that isn't' exactly the case here. 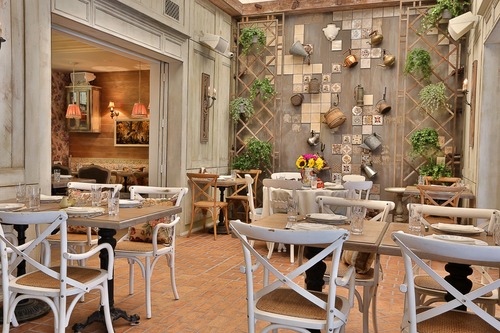 It has been a long time in the making for Mari Vanna, standing in for Bastide on Melrose Place with a new indoor/outdoor layout divided into several different spaces in which to eat and imbibe. The big draw here though is Key Mondays. Through the first month of business, owner Tatiana Brunetti will distribute keys that unlock the restaurant's front door to notable LA personalities. The idea is that on Mondays the restaurant closes to the public after 10 p.m. and staff locks doors. Those with keys are still able to enter the restaurant. Supposedly, if you don't have a key and you ring the front bell somebody MIGHT answer and MIGHT let you in. Or not. Anyway, the first Key Monday isn't planned until a month or two after launch. More to come.
·All Mari Vanna Coverage [~ELA~]