Karen and Quinn Hatfield of The Sycamore Kitchen

Share All sharing options for: Karen and Quinn Hatfield of The Sycamore Kitchen 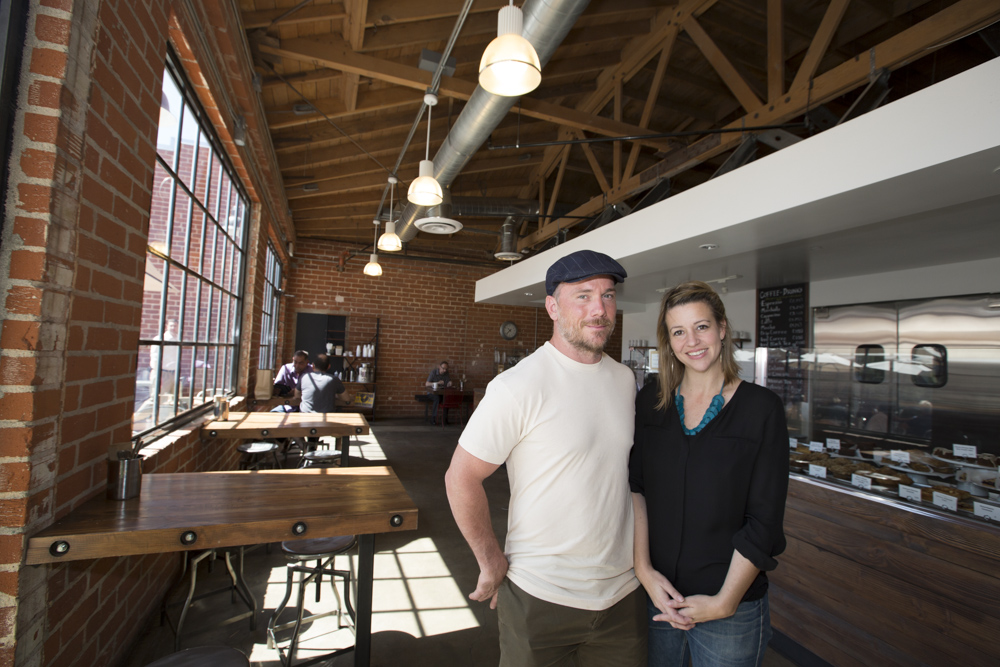 Karen and Quinn Hatfield started their eponymous New American restaurant on Beverly Boulevard seven years ago, earning accolades and even securing a Michelin star along the way. Then, three years ago, they moved Hatfield's to the Red Pearl Kitchen space on Melrose, gaining a reputation as one of the notable fine dining establishments in the city. About one year ago they debuted The Sycamore Kitchen, a casual bakery and cafe on a block that's near and dear to their hearts, a revitalized La Brea Avenue. Below, the Hatfield's talk to Eater about the development of this quaint neighborhood hub and how they continued to refine its casual cuisine over the months.

How did you find this location? Karen: A long time ago, almost two years before we opened. I was pregnant during the build out and our son is two and a half now. We got a letter in the mail, a personal letter from a broker who described the space. We weren't eager to pursue it because we had just reopened Hatfield's on Melrose in February of 2010. Quinn: But we took a look around and had a concept in mind. This space was nothing — there were no windows in the front and zero light. It was a stucco box. I think we started to see how our concept would fit into the building. Karen: You can have ten ideas, but once you find a physical location then you have to sculpt the idea into it, you can't be so rigid because there aren't that many restaurant spaces around. You have to be willing to adapt. We're really fond of this neighborhood because we hung out on this block a lot. When we first started dating we'd go shopping here. We liked the area and it's evolved a lot.

What was the build out like? Karen: This was a total build out. I plan on restaurants taking a year or two to build to open. You just have to understand that places take a long time to open. Permitting takes a long time, you just can't underestimate it. Quinn: The exception was the first Hatfield's, which we opened in less than 90 days, but even that was after four to six months of lease negotiations. That's the quickest you could ever open a restaurant.

What was it like during the first month? Karen: When we opened we just had pastries and lunch. We added breakfast about thirty days later. We were very busy for the first couple weeks because we had so much press. We were bombarded with people. It started dwindling a little but then we really started building a local clientele. It takes three months to establish what the business is going to be like. You get your bearings so you can figure out how to operate. Quinn: Openings are much harder now. When we opened Hatfield's, we didn't have to deal with the overwhelming number of people in the first few days. The first day was extremely busy. Karen: You always have this worry that no one will come. We thought, maybe people didn't know about us. This is the first restaurant that we've done that isn't based on reservations.

How did the neighborhood accept The Sycamore Kitchen? Karen: The majority of the clientele is locals, but we have people come all the way from Santa Monica. At this point it's most people from LA as we haven't hit the tourist circuit yet. We really opened to be a neighborhood place. Quinn: This neighborhood will have a draw. It's a pretty interesting shopping destination, so it's a cool place for travelers to come by.

What changed six months in? Quinn: It's mainly been about how to handle the volume. There's a lot of space constraints, in the kitchen and storage. Still being creative is something you're up against every day. The restaurant industry is challenging, period, every day. Karen: It started getting a lot busier between months three and six. It's always very hard trying to offer the quality of food, level of ingredients and service when you're doing this many covers. On a good day we'll have 800 people here, which isn't too bad. The tough thing is serving 600 people between 12-2 p.m. on weekdays, or between 10 a.m. to 1 p.m. on weekends.

What are your favorite things on the menu? Karen: We're really proud of the menu. We got to test recipes at Hatfield's and built a core of recipes there. Given my mood, I like the carrot muffin, which I just ate. I love the oatmeal brown butter scone, as well as the quiche. As for doing the recipes, making the pies were really challenging. We have ten different versions of pie dough for different things, so it's really about nailing the fundamentals. One has lard, another butter, another has nuts. I also love the salted caramel pecan babka roll. We tested that one for a long time. I'm not a fan of Cinnabon, so I wanted to get something that wasn't doughy. I was looking for a specific texture with the dough, it's yeasted and still really light. Quinn: I'm not a baker, Karen's a baker. Here, I'm strictly a customer, and the babka roll is insane. I really like the rye cookie and oatmeal scone, but the babka is off the charts. Karen: Quinn is all or nothing. He parties like a nine-year old. When he gets a babka roll, he wants two. Quinn: I don't eat this stuff often, maybe once a week, so I like to let it go.

Who gets the day olds? Karen: No one gets to eat the day olds. We have a fairly good gauge of what to make, but there's always leftovers. The staff generally takes it home in boxes.

What else is good on the menu, in terms of savory dishes? Karen: The pork belly hash, the Mediterranean salad. I love the eggs Benedict, and I go back and forth between that and the turkey sandwich. Quinn: It seems less obvious, but we're roasting a turkey every day for that turkey sandwich. A free-range turkey, brined and roasted. People are used to deli turkey. We like to stay away from processed stuff. We're making everything in house, it's really simple and it shows in the product. We don't make our tuna sandwich from canned tuna. We start with fresh raw albacore, confit, and at first glance, it looks like a regular tuna sandwich. It's way people think it's the best tuna sandwich they've ever had in their life.

How has press and Yelp affected business? Karen: Not much has changed in the last three years, but it certainly has since we first opened Hatfield's seven years ago. When we did a restaurant in San Francisco, it was all print. But then the magazines died and now it's exclusively online. Back then online reviews were nothing. Quinn: I don't look at Yelp. What's interesting is that they have this star system for something that was originally designed to rate only great restaurants. Even one star in the New York Times was above average. Karen: Then everything started getting casual and the ratings went bizarre. It's hard to differentiate between high and low end. But I think you need press. Most of the journalists these days only write about new restaurants. Quinn: It used to be that there would be one reviewer, and you'd know their style. Once you got to know that reviewer and how they wrote, you had a consistent gauge. The whole thing has gotten away from single people doing it. It's much harder to figure out who a Yelper is.

What do you think about the current food scene? Quinn: Food has exploded over the past few years. It used to be that being a foodie was like supporting an artist. You'd go back to restaurants to support the chefs, and you develop a relationship. Now it's like sport. It's about eating everywhere. The personal part of it has kind of been lost. One of the things that's happened is that with shows like Top Chef, everyone splits into two categories: judge and contestant. So people feel obligated to be judges now.

Has it felt like a year? Karen: It's been a good year. There's been a lot of growth and we feel settled in. We're excited for the next year.

Do you like fine dining or casual dining better? Karen: When we opened Hatfield's on Melrose, everybody told us it wasn't the right time for fine dining. But it's a concept we've committed for the long haul. It's timeless. The real goal was always to make a place that we thought was an expression of us, where we'd like to eat. It's a place where we thought was the right thing, what we wanted to make, a place that we'd want to experience. It's still alive, still evolving. The space is actually running very smoothly and we have great people who've been with us a long time. We have guys that have been with us since the original location, so it's like family. It's very fulfilling to have two restaurants so close together. You have a certain obligation, a loyalty to all the locals. It makes the work a little more rewarding. We have a lot of regulars here that now to go Hatfield's, and vice versa.