1) Santa Monica: It seems only fitting that the second branch of Water Grill, the high-quality seafood brand operated by King's Seafood Company, would open across from the beach, on Ocean Avenue, also not far from both the Santa Monica Pier and the Third Street Promenade. The long-established original Downtown locale upgraded its retro American seafood bistro look earlier this year and, in accordance, the Santa Monica site follows a similar aesthetic. The even larger open space is set with a central drinking bar and a smaller raw bar plus oyster shucking station to the far left. Straight back from the entrance sit large water tanks with shellfish fluttering about and awaiting chef Damon Gordon's deft touch. After a couple nights of friends and family service this past weekend, Water Grill opens its doors to the public tonight. Lunch kicks in tomorrow. Pro tip: Don't miss the salted caramel bread pudding. 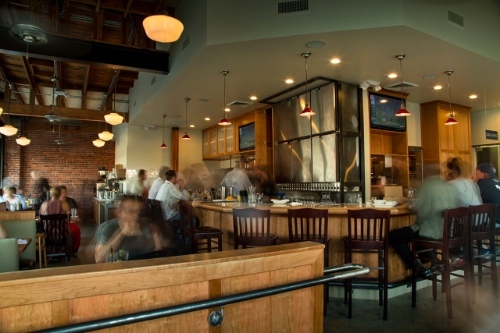 2) Santa Monica: Proprietors Tim Foley and John Kaufman thought that their Westchester-based straight up American restaurant would fit well with the denizens of Santa Monica, and they're about to find out because Truxton's American Bistro rolls out Firecracker Chicken Skewers today with Truxton's sophomore effort at Santa Monica and 14th. This joint is American-American through and through, defined by a cherry wood bar, partially open ceiling, and exposed brick. The menu is jammed with familiar sounding plates like five cheese spinach dip, miso salmon, and a barbecue chicken pizza. Management is especially excited about its cask wine program orchestrated by Lou Moench (Father's Office), with a focus on west coast winemakers. But there's also a full bar and craft beer. Hours of operation run Sunday to Thursday 11 a.m. to 11 p.m., and Friday/Saturday 11 a.m. to midnight.