Share All sharing options for: LA's 21 Most Anticipated Fall and Winter Openings

Summer is coming to an end and that means restaurants which have been built out and worked on throughout the warm weather are finally looking to debut during the busy fall and holiday months. There's some pretty incredible places in store, such as Josef Centeno's Orsa & Winston, Superba Food & Bread in Venice by Paul Hibler, as well as Walter Manzke's Republique, replacing the iconic La Brea Bakery and Campanile building. Below, a list of the most important openings in Los Angeles for Fall and Winter. 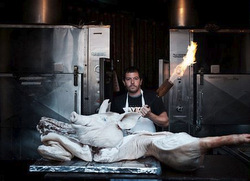 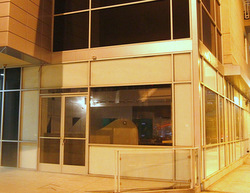 20) Downtown: Sushi Zo
Major Players: Keizo Seki
The Situation: This high-end sushi place has garnered plenty of accolades over the years at its humble Palms-adjacent strip mall home, though this new Downtown location right in the middle of the Old Bank District should be a game-changer for the area. Offering some of the best quality omakase menus in town, Sushi Zo's interior is mostly built out and is probably awaiting inspections and early trial runs by staff.
Projected Opening: Early Fall
[All Suzhi Zo Coverage] 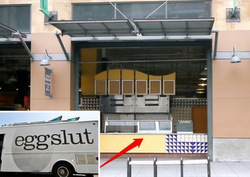 19) Downtown: Egg Slut Grand Central Market
Major Players: Alvin Cailan, Jeff Vales
The Situation: Popular sandwich truck Egg Slut is finally getting a brick & mortar location in Downtown, with this egg-centric restaurant will be ready to sling nearly 600 sandwiches a day with the improved equipment at the Grand Central Market stall. They'll be serving breakfast, lunch and afternoon snacks. In the meantime, they're also repairing a truck so that they can maintain mobile operations on the Westside.
Projected Opening: Early Fall
[All Egg Slut Coverage] 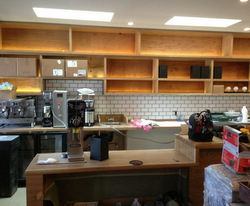 18) Silver Lake: Lucky Duck by Square One
Major Players: John Himelstein
The Situation: Taking over the old SiLa Bistro spot on Hyperion, Himelstein (Square One, Gingergrass) is moving full steam ahead with the transformation of the interior. Originally thought to be called Square One Tavern, the whole concept and menu haven't been determined yet. Himelstein recently took over the boathouse at Echo Park Lake, bringing New American breakfast & lunch offerings much like Square One in Hollywood.
Projected Opening: Early Winter
[All Lucky Duck by Square One Coverage] 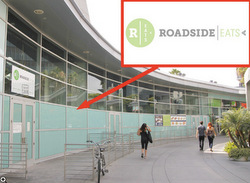 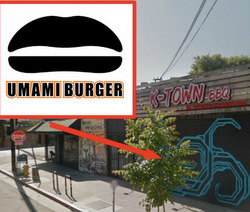 16) Arts District: Umami Burger
Major Players: Adam Fleischman
The Situation: As Umami Burger tends to do, the Fleischman-directed chain will be taking over a former restaurant in Arts District. Previously a barbecue spot, this location of the ever-popular burger-slinger features 60 seats, an outdoor patio, and local art & furniture for the interior design, which will be put together by Westin Mitchell Design Group.
Projected Opening: Mid-Fall
[All Umami Burger Coverage] 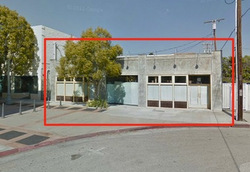 15) Culver City: Enjoeat
Major Players: Antonio Pellini
The Situation: The restaurateur behind Eatalian in Gardena is opening a full-scale Italian restaurant in the heart of Culver City. A formal sit-down experience is in the works, along with a bakery and gelato operation in the slightly hidden location just behind the main drag. At the moment, the interior is still getting the rough treatment, with finishes still a few weeks from going in.
Projected Opening: Mid-to-Late Fall
[All Enjoeat Coverage] 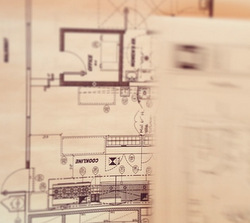 14) Silver Lake: Night + Market
Major Players: Kris Yenbamroong
The Situation: This 1,400 square foot location plans to be nearby Sunset Junction, with the menu following Yenbamroong's popular Sunset Strip restaurant in West Hollywood. For drinks, think wine and a few beers. At this point, the exact location is unknown, though there is some speculation that it might be the space adjacent to the renovated Black Cat, but construction had started some time in July. This should be a terrific addition to the hipster neighborhood.
Projected Opening: Late Fall
[All Night + Market Coverage] 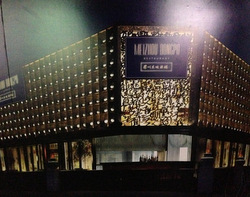 13) Century City: Meizhou Dongpo
Major Players: Wang Gang
The Situation: Though the details of this popular Beijing-based chain's opening in Century City are murky, the group is run by one Wang Gang, who has taken the brand across China. Featuring Sichuanese dishes like hot pot, dan dan noodles, and more, this rather authentic establishment takes over the defunct Umbra space on the dining deck, just next to the AMC Theatres. Originally slated to open in summer, the plywood hasn't been taken off just yet.
Projected Opening: Mid-Fall
All Meizhou Dongpo Coverage] 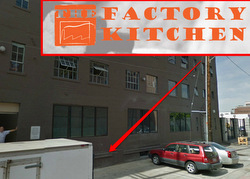 12) Arts District: The Factory Kitchen
Major Players: Matteo Ferdinandi, Angelo Auriana
The Situation: This 3,000 square foot Italian eatery in the heart of the Arts/Industrial District was a former fish factory. Using reclaimed wood and retaining much of the industrial feel of the place, Auriana plans to serve regionally-based trattoria-style dishes for dinner, along with lighter fare for lunch. Previously the executive chef of Valentino, Auriana hopes to offering fine cuisine in a casual ambiance, with eventual weekend brunch service.
Projected Opening: Early Fall
[All The Factory Kitchen Coverage] 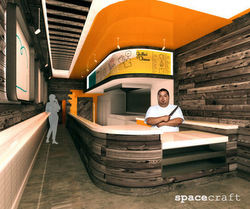 11) Melrose: Greenspan's Grilled Cheese
Major Players: Eric Greenspan
The Situation: Many years in the making, this fast-casual melted cheese sandwich joint will feature the chef's award-winning short rib and taleggio cheese creation. Designed by Spacecraft, the eatery was originally projected to open in July. No word yet if the gut-bomb that is the triple-decker Monte Cristo is planned for the menu.
Projected Opening: Early Fall
[All Greenspan's Grilled Cheese Coverage] 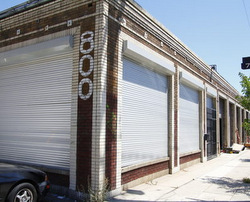 10) Arts District: Stumptown Coffee
Major Players: Matt Lounsbury, Duane Sorenson
The Situation: The celebrated Portland coffee roaster is moving into the Arts District, just down the block from Bestia, with a full-on wholesale operation and a friendly neighborhood cafe that should give nearby Handsome Coffee a run for its money. A glass wall will reveal the roasting operation for retail customers to look upon.
Projected Opening: Early Fall
[All Stumptown Coffee Coverage] 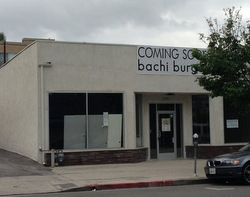 9) Sawtelle: Bachi Burger
Major Players:
The Situation: This popular Las Vegas-based mini chain uses a Japanese-cuisine approach to burgers, using such ingredients as foie gras, unagi, and wagyu beef. Since foie gras can't be served in L.A., Bachi will have to take on the rest of their creative approach to assembling burgers, including seaweed, miso, and turkey "tsukune." This Sawtelle spot should being a nice little friendly competition with Plan Check just up the block. Beer & wine served as well. At the moment, construction is still in heavy mode, meaning the ground is still getting cut up and walls filled in.
Projected Opening: Late Fall
[All Bachi Burger Coverage] 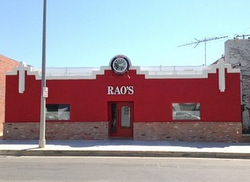 8) Hollywood: Rao's
Major Players: Frank Pellegrino, Nicole Grimes
The Situation: This hallowed old-school Italian from New York is expanding even farther west after an initial planting in Las Vegas. Taking over a lonely stretch in Hollywood amidst studios and warehouses, the kitchen at Rao's will be helmed by Nicole Grimes. Inside, think dark wood, round tables, and a small bar. Outside, there's an outdoor patio for soaking up the cool L.A. evenings.
Projected Opening:Early Fall
[All Rao's Coverage] 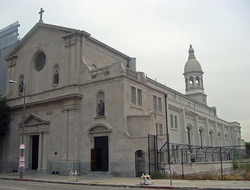 7) Downtown: Redbird
Major Players: Neal Fraser, Amy Knoll, Bill Chait
The Situation: Originally slated to be the re-located Grace restaurant, Fraser's eatery will be located inside the former rectory of the Vibiana cathedral. No word yet on the concept or menu, but the place will have a full 47 liquor license, which means Julian Cox is lined up to do the cocktails. According to the website, the pair [Fraser and Knoll] will bring a cosmopolitan experience and ambitious dining to downtown Los Angeles.
Projected Opening: Late 2013
[All Redbird Coverage] 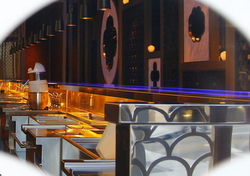 6) Beverly Hills: Hakkasan
Major Players: Ho Chee Boon, Armando Conway
The Situation: Worldwide chain Hakkasan, which recently opened a massive club and restaurant at the MGM Grand in Las Vegas, has been working on this Beverly Hills location for quite some time. The interior looks almost completely built out, with an official debut only a few weeks away. Ho Chee Boon plans a high-end Chinese menu featuring some of the chain's classics, while Armando Conway oversees the cocktail program.
Projected Opening: Mid-September
[All Hakkasan Coverage] 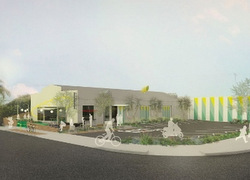 5) Venice: Superba Food & Bread
Major Players: Paul Hibler, Jason Neroni
The Situation: Many months in the making, taking over a former auto repair shop, Hibler and Neroni are planning an all-day eatery with fresh bread, casual bites, and even neighborhood delivery. The interior will be conceived by Design, Bitches, with a large outdoor seating area and a clean, vintage industrial look overall. The 5,000 square foot space intends to be the locals spot that Venice denizens have been craving.
Projected Opening: Late 2013
[All Superba Food & Bread Coverage] 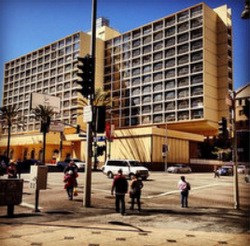 4) Koreatown: The Line Hotel
Major Players: Roy Choi, The Houston Brothers
The Situation: The group behind NYC's The NoMad are building a boutique at a classic midcentury hotel on Wilshire in the heart of Koreatown. Chef Roy Choi is set to oversee the entire food & beverage program while the Houston Brothers are doing a cocktail lounge. The rooms have a colorful, modern aesthetic that perfectly reflects the zeitgeist of L.A. life.
Projected Opening: Mid-November
[All The Line Hotel Coverage] 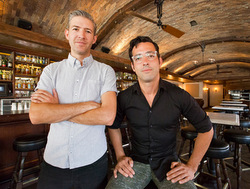 3) Venice: Old Lightning
Major Players: Steve Livigni, Pablo Moix
The Situation: Cocktail impresarios Livigni and Moix are finally arriving on the Westside with this idealized drinking den that will feature a vintage spirits list that will model a Michelin-starred restaurant's wine list. Sure, there's pricey, rare cocktails made from uber-rare liquor bottles, but there's also $9 cocktails available on tap. It'll be a fine place to get a drink in this part of town.
Projected Opening: Early Fall
[All Old Lightning Coverage] 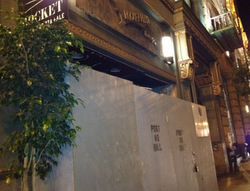 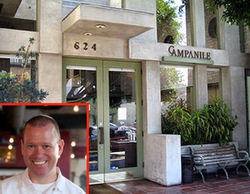 1) Mid-City: Republique
Major Players: Walter Manzke, Margarita Manzke, Bill Chait
The Situation: Walter Manzke's glorious return was predicated by the ever-popular Petty Cash Taqueria, but Republique is still on the chef's mind. The eatery will feature a hefty baking operation and casual scene during the day before making way for an elevated dining experience during the evening. The French bistro takes over the iconic Campanile and La Brea Bakery space, with an opening just a month or so away.
Projected Opening: Early to Mid-Fall
[All Republique Coverage]
·All Eater Tracking [~ELA~]