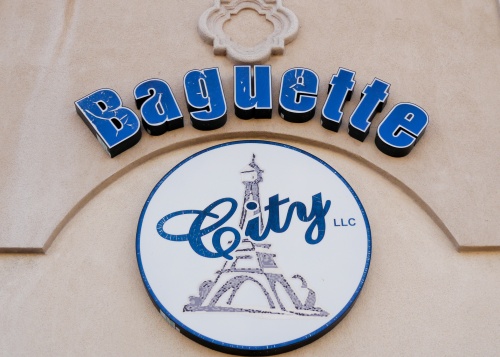 Baguette City, a small banh mi sandwich shop in South El Monte, will celebrate its tenth birthday next Monday. During those ten years, another Californian Vietnamese sandwich shop blossomed into corporate behemoth, one fellow hole-in-the-wall graced the centerfolds of a metro magazine, and many others have folded. None, however, has been as steadfast and restrained as Baguette City, a beloved local joint with ownership staked in the far distant land of Seattle suburbs.

The tchotchke-filled shop reminds everyone of all the traditions of a Sino-Sina (Chinese-Vietnamese) trilingual family. There is a buddhist statue with a Chinese amulet and a money tree immediately to the right, but the soap opera dialog emitted from behind the counter is clearly Vietnamese. Two Chinese dialects are spoken here and someone manages the Facebook page in English well enough, though first timers will appreciate the numbered menu items. 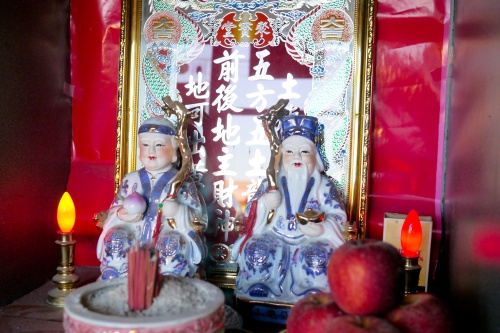 The baguettes used in this particular sandwich shop are baked fresh daily. Sometimes Baguette City runs out, but more often than not, the bread stock lasts all day. And the "day" is long here; the staff unlocks the door at 6 a.m. to serve the many blue collar workers who passes through the less gentrified San Gabriel Valley city of South El Monte en route to work. The Vietnamese iced coffee here has remained $2 forever. For those too impatient to properly wait for the concentrated chicory coffee to be thinned out by ice, an off-menu "large" runs $3. The lunch sandwich du jour here typically means the #7 "special," (Vietnamese ham, head cheese, mystery pork) but the morning crowd often goes for the egg option, and fried eggs are available as add-ons to every sandwich.

A small selection of "che," Vietnamese sweets, are available to-go in the cooler on the left. "To-Go" is the crux of this operation. The staff may be spotted occupying the small side table (out of three total), and the constant foot-traffic causes frustration in the parking lot shared with a laundrymat. Fear not though, everything moves quickly, and it's okay to pull straight into your very own make-shift stall perpedicular to the front door, thereby immediately creating chaos. Treat the parking lot like Domaine LA's and you'll be alright.

The sandwiches here measure nine inches and carry a seven-inch girth. They're not meant for size queens nor gluttonous hounds. What they do convey is an eerie feeling of uncomfortable authenticity. Food portions in Asia, despite Yum Brand's recent infiltration, have not increased as drastically as in America since the 70s. Baguette City's sandwiches carry the svelteness of a product sold roadside in Hochiminh City. Banh mi in Vietnam isn't a foot long; obesity hardly exists in Hoi An. Taking a bite of a banh mi here is transportative. 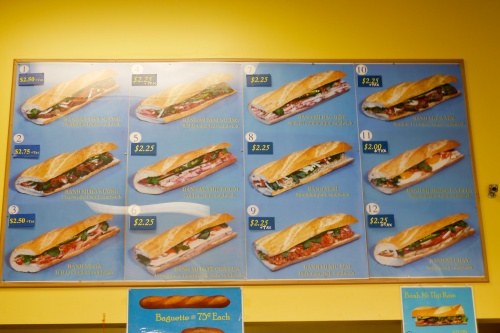 This brings us to the second bullet item in any discussion concerning Baguette City: The prices are ridiculous. These are the cheapest baguette sandwiches in San Gabriel Valley barring volume purchasing discounts. The "dac biet" special — with its three charcuterie cuts, cucumber, quick-pickle daikon, cucumber, slight dab of mayo, cilantro and light use of sliced jalapenos — is $2.25. For those who just can't handle the thought of a skinny sandwich after being brainwashed by the supersize concept, try the curries. Since 2010, prices have risen once, and you can tell exactly which sandwiches cost more now because there are tactless "+ tax" stickers next to the prices on the menu board. Of note, "+ tax" literally means a quarter. No one else explains this to you. The fuzzy math is charming, and it streamlines their operations. Everything is calculated in increments of quarters here. Don't attempt to understand, nor correct the system. Embrace the sandwiches, embrace the system: walk straight to the counter, order expeditiously, move to the right, wait for the sandwich to be called (they won't even bother writing down your name), and get the hell out of that parking lot. 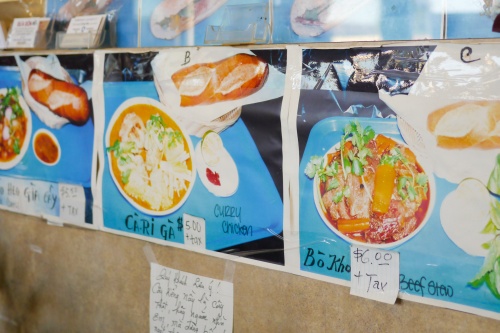 Pro tip: For those who refuse to partake in non-third wave Vietnamese iced coffee (which is nearly unpotable without condensed milk), try the blended pennyworth juice, rau ma. It's a simpleton's version of Pressed Juicery Greens at half the price.

Uber pro tip: For those who like to drink their dessert along with the main meal, ask for sweet mung beans in the rau ma drink mentioned above.
·All Dining on the Dime in the SGV Coverage [~ELA~]