David Myers and Kuniko Yagi of Hinoki & the Bird

Share All sharing options for: David Myers and Kuniko Yagi of Hinoki & the Bird 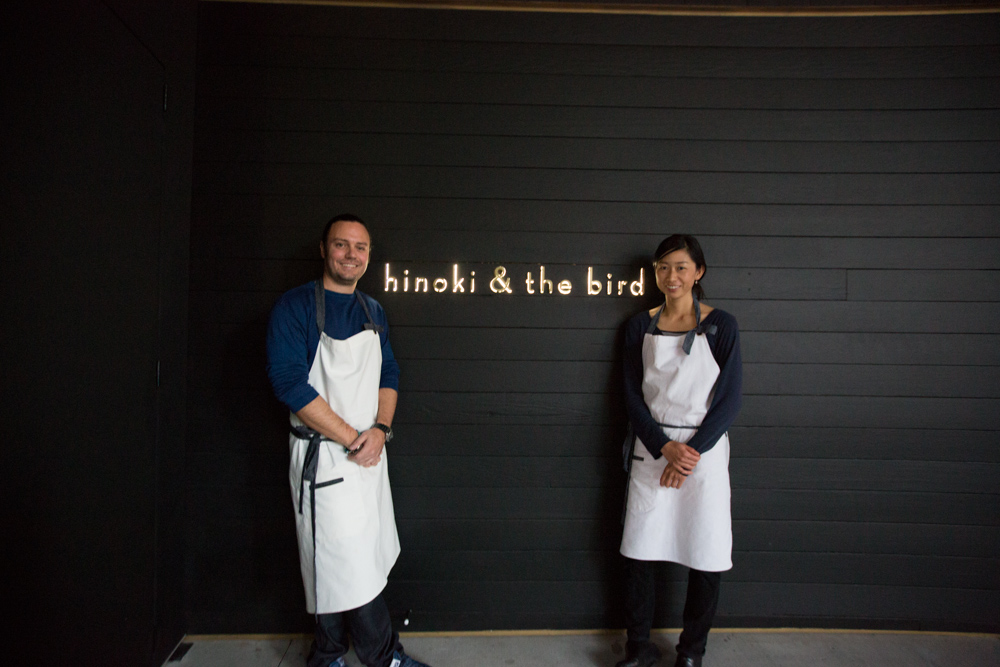 Chef David Myers closed his lauded fine dining establishment, Sona, back in 2010. In 2013, the chef came roaring back with the refined yet approachable Hinoki & the Bird, a subterranean eatery tucked away in the utopian confines of Century City. Together with executive chef Kuniko Yagi, who helped launch the restaurant with a stint on Top Chef, Myers has once again captured the culinary minds of Angelenos. Taking on a decidedly Japanese-style approach, Hinoki & the Bird presents the whole package: great cocktails, stunning interior, and unfussy dishes that allow ingredients to shine. Here now Myers and Yagi talk to Eater about the polished establishment's first year, and plans for the next.

Was the build out like? David Myers: We had a very aggressive time table, but we had everything done in about six months. Kuniko Yagi: There was nothing here, the whole building was brand new. DM: We knew this location wasn't a home run. While it's in a dense area, it's totally hidden, and it's not easy to find. We really had to think about what design was going to work with what concept.

Who was in charge of the design? KY: Chef David did a lot of designing. I had some ideas about Japanese plates. DM: We worked with an amazing team, I look back and each of the four or five people we worked with are mavericks in their field. For the uniforms we used Japanese denim. There's amazing leatherwork in the menu covers. We let each designer run with the idea after we told them about the vision of our restaurant. We were lucky to have these people, it was like having a great band. KY: We had meetings every Sunday and spent hours walking through the design.

How did this concept come about? DM: This is the first restaurant I've done that was borne out of travel. The beauty of those travels provided the inspiration and excitement. The new techniques and stories and people I picked up along the way, the people cooking on the streets, explaining how their dish worked. This place was never meant to reflect Japan or Southeast Asia. It was meant to reflect our journey through the Silk Road. Kuniko spent time in Japan and Southeast Asia as well, bringing back ideas. We see California as the gateway to Asia, as a jumping off point to Asia.

What changed after the first month? KY: We started using these plates, not like the plates we had at Sona. We needed help on the presentation, so we hired a company called Oasis out of New York. DM: They brought pieces in, such as rice bowls for the beef tartare. The effort made everything a little bit different and unique. It ruffled things up a bit because we didn't want each plate to have a similar, clean feeling. We wanted to add texture and make sure that each plate had a purpose.

What about six months in? DM: That was when we realized, holy shit, we're really busy. Things kicked in almost like a jet engine. We just had to go with it and keep running. KY: We quietly started lunch service in April, but that started kicking in June. DM: We got super focused with the dinner crew. We went through initial phase of opening, so now it was about fine tuning everything. We changed up some dishes because they were more ingredient-driven and the season had changed. KY: We changed some dishes that everyone loved like the peewee potatoes, which are now the okra.

What was the affect that Top Chef had on the opening? DM: Top Chef was really helpful. People came in to see Kuniko. It was amazing to see how many fans she had. KY: I was amazed that they remembered who I was. I wasn't on the show for very long.

How was the critical reception affected business? KY: It's nice to know that critics liked the food and gave good reviews. We were very nervous and didn't know what to expect. We started doing 300 covers for dinner and 100 for lunch. When we opened, we didn't calculate that this many people would come. We thought, this is Century City. DM: We didn't expect 300 covers. When the reviews come in, it's out of your control. When critics sit down, you tell your staff to do what they're trained to do. You're just hoping that the concept resonates with them. I was impressed and appreciative that the critics were into it.

What's next for this year? DM: We're not interested in keeping the status quo. We want to enhance the experience by toying with some fun ideas. We have some spaces that we haven't used that will be experimental, that will involve art, drinks, and dishes from friends in Tokyo, Hanoi, and Hong Kong.

You closed Sona in 2010. Do you see this as an appropriate response after closing that restaurant? DM: This restaurant is everything that I envisioned. It feels like a home. I want to live here. KY: I think chef David was thinking, this is where I am now, which is different than what Sona was five years ago.

Were you timid or afraid when you opened here in Century City then? KY: When I met chefs at the farmer market, they told me not to do it. They said we'll never have business in Century City. They told David not to take this place. DM: There was definitely a current of make-or-break-it. Then I just completely lost myself. I was just having fun, everyone was just having fun. This was the most exciting place I've ever opened, with just the energy and the ideas. KY: We took nothing from Sona. Everyone was expecting me to bring over aspects of Sona. I'm a Sona baby, learning how to cook there from A to Z. But we did something completely new. There's no meat stock here, no stews. I had to stop myself and think, this isn't a French restaurant. We don't have dairy, cream or butter. We had to come up with our own style, our own way to cook.
·All One Year In Coverage [~ELA~]