Share All sharing options for: Ori Menashe and Genevieve Gergis of Bestia 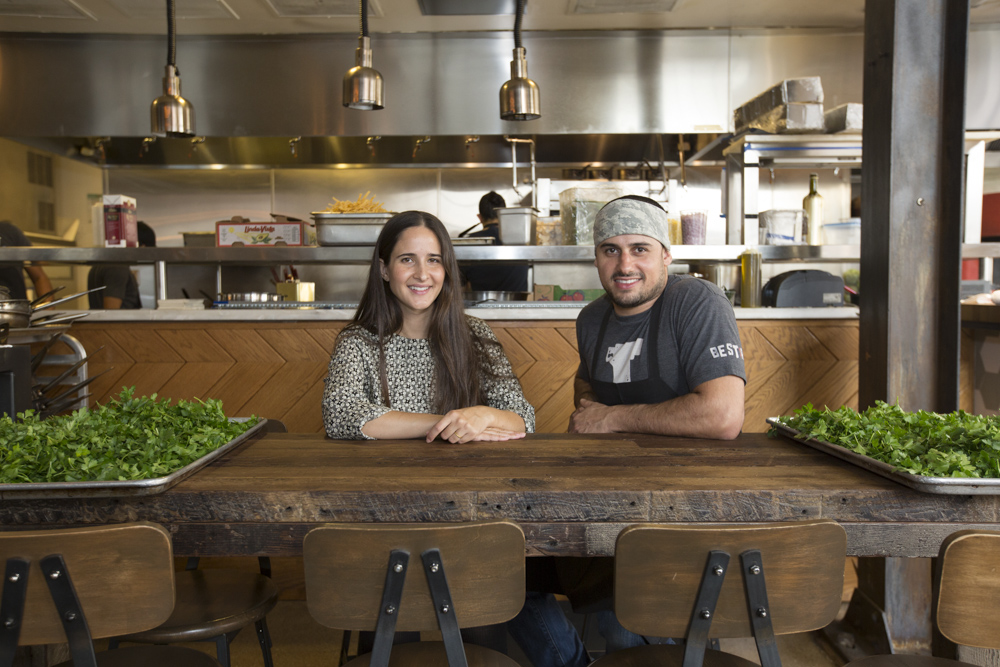 Ori Menashe and Genevieve Gergis opened the hotly anticipated Bestia in one of the most unlikely locations in Los Angeles, a hidden street in an industrial part of the Arts District. Since then, the block is bustling, with Stumptown Coffee, Bread Lounge, and the forthcoming Fifty Seven opening residing on the corner of 7th Place and Santa Fe. Bestia's unique build out, combined with Menashe's superb cooking, makes the restaurant one of the landmark openings of the past year, one that received both critical acclaim and widespread appreciation from diners across the city. Here now, Menashe and his wife Gergis talk about their restaurant's impressive first year, as well as future concepts in the works.

What took you so long to finally open a restaurant? OM: I always had my idea of opening my own restaurant. My parents told me I was ready after three years in the culinary world. At five years I was probably ready. But I took my time, working for 11 years. We opened here on November 26, though we had been running Test Kitchen before.

How did you come across this space? OM: We looked at a few spaces close to here, like where Little Bear currently is. That wasn't what we wanted, we wanted more light. We didn't want to build a six story hood or burn wood in that building. When we saw this place, I knew it was the place. We were hunting for our future, it was all or nothing. GG: When you have a house, you're building it for yourself, but a restaurant is about making sure you have the right location for the food and clientele. OM: This space was so big. I was planning on opening something much smaller, like 100 seats. I didn't want to go overboard with the food and make mistakes because it's much harder in a larger restaurant. The whole menu changed when we found this location.

How was the build out? OM: It wasn't that long, about three and a half months. It longer with plumbing, but the landlord finished his part. GG: This building had the bones that we wanted, plus we didn't have to tear anything down. Building a kitchen and a bar isn't much work because you're not going to run into structural issues.

How did you go about the design? GG: We added beams to match the space. It looks like it could've been an old butcher or slaughterhouse. Like the sign that we have outside, we wanted to add elements to keep the building authentic. We also wanted each part to feel differen, so the pizza counter has one kind of tile and the chef's table is a wooden area. Wherever you sit in the restaurant you have a different experience. The same food but a different vibe. You hear in fashion, you always want to be able to take something away from an outfit. We wanted people to focus on food and each other. So it's not trying to be a New York place or LA restaurant, but something timeless.

What's your approach to cooking and why do you think this food is so popular? OM: It's been like this Europe for so many years. You have one main ingredient, make sure it's the best, and let it shine. People think it's not creative, but there's so much involved to make one pork chop. It takes three days to prepare. There's the mostarda de fruita, which takes a full week. To get the flavor profile, we brine the pork chop for two days. We wanted to put more focus on the main ingredient. I wasn't sure if this simple-looking execution would work for this crowd, but I guess I was wrong. When you present one thing, it has to be the best of the best.

Did you think the cocktail program had to be that important? OM: The bar program was something that Bill Chait got us into. I used to never be a cocktail person. But the people behind the bar are really talented. Julian Cox supervises, but all the drinks made by people who work here. Each bartender has 1-2 drinks and gets the stamp of approval from Julian. I think it works really well and complements the food. That bar saved us because it's like a waiting room before people get their table. Diners here just don't want to leave, even after three and a half hours! We needed that area to calm people down.

How was all the positive critical word been helpful, and do you care what they say? OM: Word of mouth is really what got us here. All the reviews were good, but I was a little bothered that we didn't get mentioned by Esquire. They had a reservation but ended up canceling. Alice Waters came in three times and sent us a personal handwritten letter saying that it was one of her favorite new restaurants in L.A. Even after his review came out, Jonathan Gold kept coming here, so that kind of says it to me.

Do you ever get to spend time outside of the restaurant? GG: We take a day off once a week and we end up going to restaurants. We like to eat a lot. Places like Rustic Canyon, Jeremy is a great guy and a great chef. He never thinks he's talented, only other people. What's why he's so good, he keeps pushing himself. OM: We love Salt's Cure for brunch and dinner. We love Totoraku, Sotto, Picca. I love Night+Market and Corazon y Miel.

What dish are you most proud of? OM: The chicken gizzards. It's awesome. They're super tender, and crispy. We cure, then confit them before pan-searing to finish. We place them on a simple salad of endive and roasted beets before mixing with a mustard vinaigrette. Then we grate aged goat cheese on top. I'm really obsessed with creating new dishes. When we went to Hawaii for vacation, I got up at 6 a.m. every day and filled my notebook with notes for my Middle Eastern restaurant. I had a notebook like that for this restaurant.

What changed after a month of opening? OM: Initially we had less organs on the menu. But I love the flavor of organ meat. It's an ingredient that's packed with flavor, and I don't like wasting anything. So many animals get slaughtered for prime cuts. I thought it was more of a challenge for organ meats to taste good.

Has it felt like a year? OM: It's felt longer. I feel like we've been open for 2 years. I think those first three months we didn't take a day off. We were closed on Mondays but we were working, making pizza dough. I would fall asleep on the way home. I'm happy I was in the military because it helped me go through those first few months, which were 18 hour days for three months. I'm happier now, I have more time to think about new ideas for the menu. GG: It feels like it's been twenty years. We did the math and we served over 100,000 people in the first year.

What do you have planned next? OM: In addition to the Middle Eastern restaurant, I'd love to do a falafel shop.
·All One Year In Coverage [~ELA~]