Midwesterners have long searched for an acceptable deep-dish pizza in L.A. that would fulfill their needs. Chicago-style pan and deep-dish pies could be found at spots like Masa of Echo Park or even Tony's down in Placentia, but the real deal didn't hit the city until David Miscimarra decided to completely re-engineer the deep-dish at Hollywood Pies. Despite a small setback in October, this humble Mid-City pizzeria is now pumping out more deep-dish pies than ever before. Here now, Eater goes through Miscimarra's entire process, and why these pizzas reign supreme in L.A.

Though the process is pretty standard, David Miscimarra, who's a design engineer by trade, reworked and refined the entire system so that it would maintain consistency despite an uptake in production. The dough gets spread into a seasoned pan, which is essential for flavor and developing a good crust. 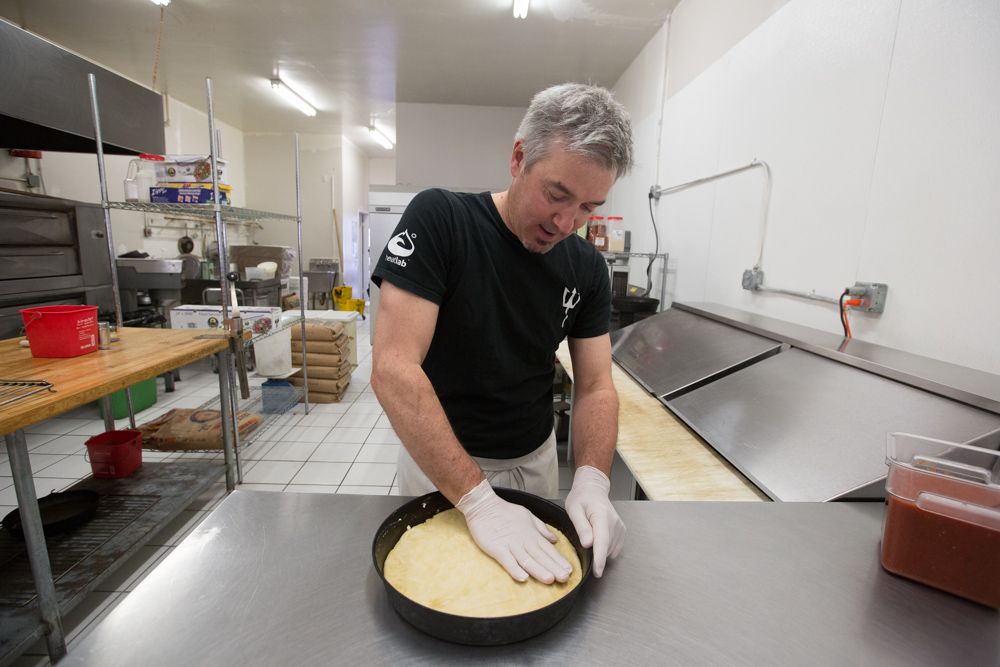 Though Miscimarra doesn't have any formal training in the kitchen, he tweaked the process for years before getting to this recipe. He also sources some of the best ingredients, knowing that something so simple generally rests on the quality of those materials. 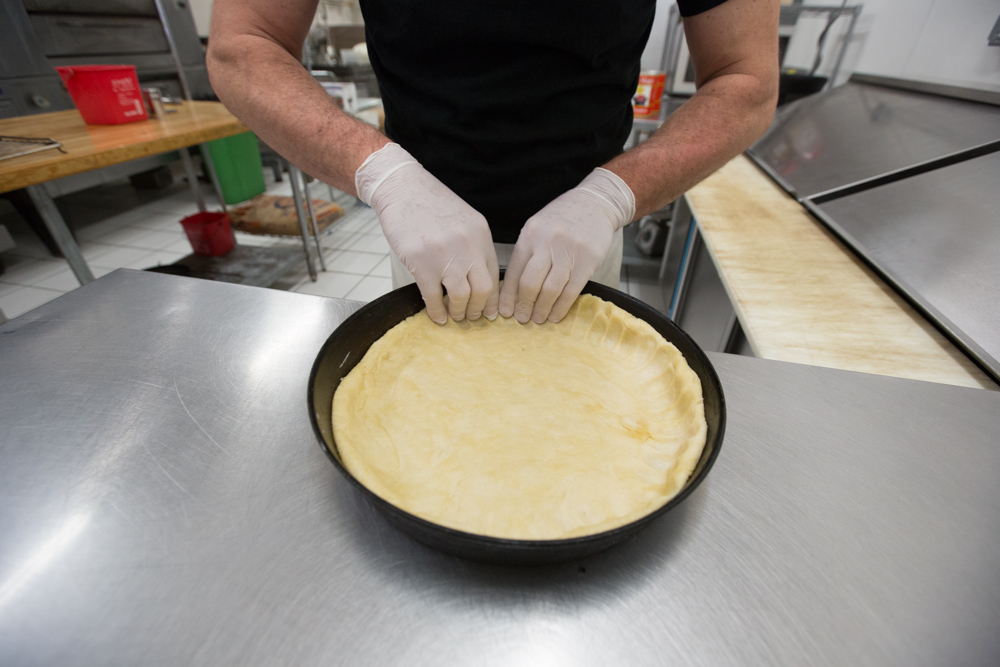 After putting the dough into a seasoned pan and spreading it evenly for uniform thickness, Miscimarra places in house-sliced cheese that he gets from a small Northern Wisconson dairy. Though places like Giordano's in Chicago tout one-inch layers of cheese, Miscimarra knows that his customers in L.A. wouldn't order again if the cheese was that thick. But this method allow for a greater balance between the ingredients. 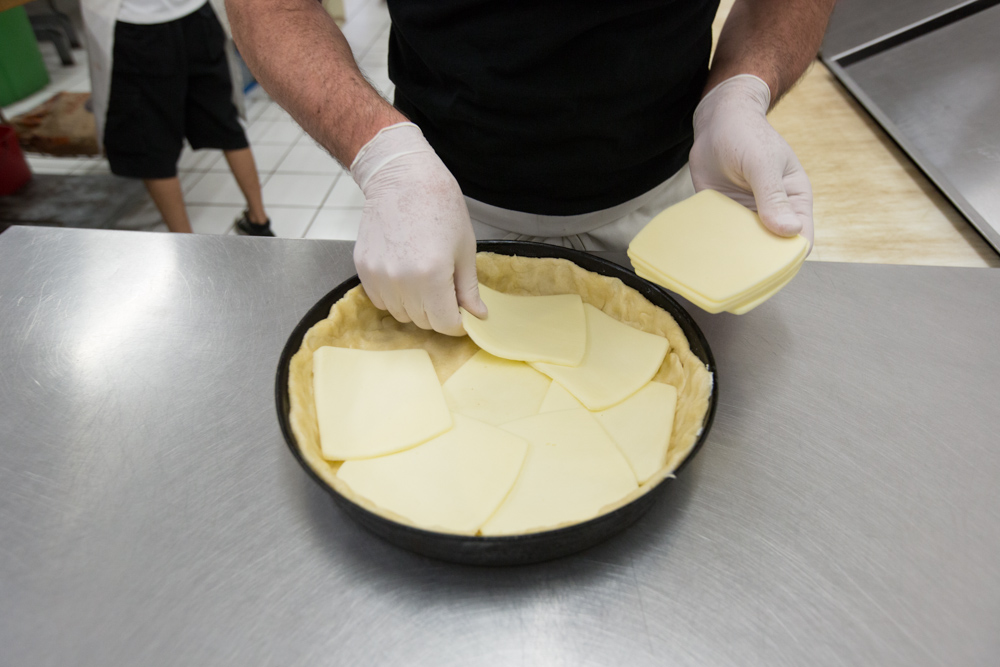 The next step is using an old 1950's cookie press to pump in gentle lumps of ricotta cheese. Next goes in ground sausage, though one could also order the sausage patty, which covers the middle like a huge burger patty. 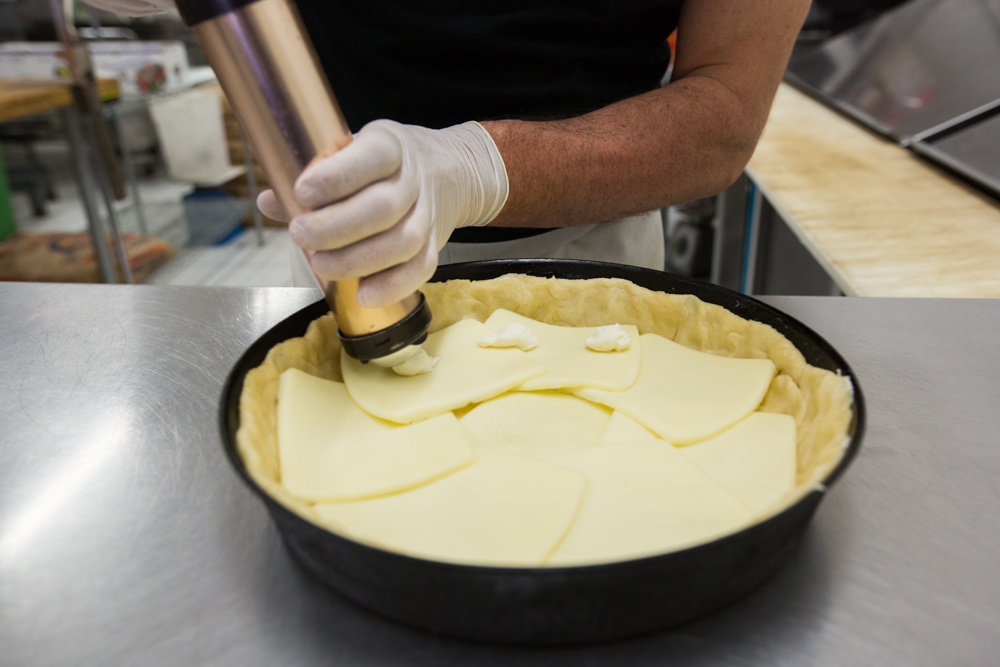 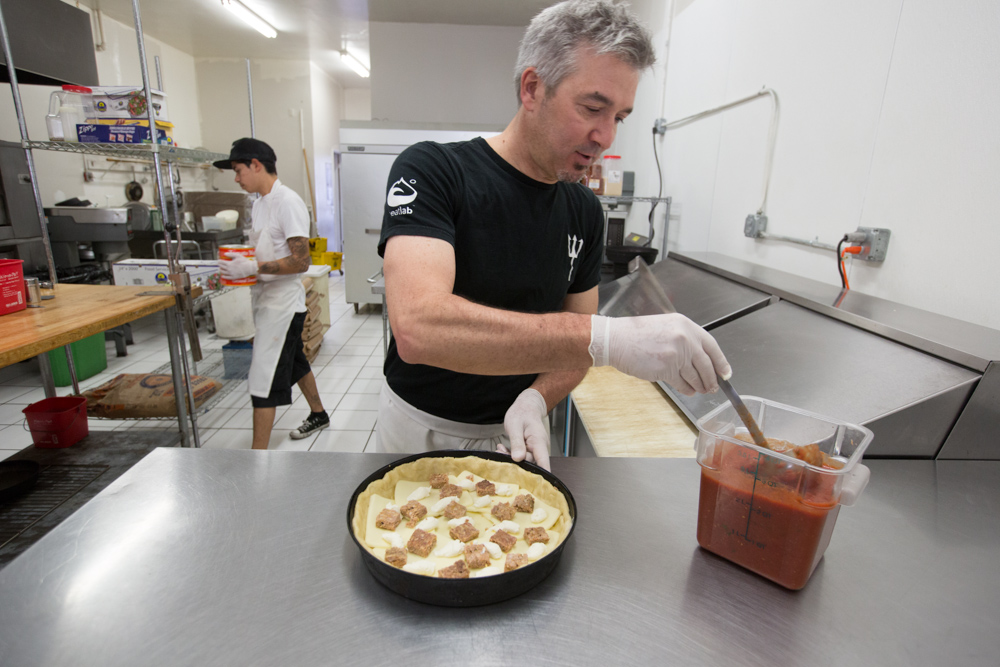 Finally, the tomato sauce, which gets made in-house and could be eaten raw. But since the sauce essentially gets cooked in the oven when the pizza is in there, there's no need to pre-cook it. Miscimarra believes this tomato sauce is the real star of the pizza, and up to three cups can get loaded into a pie before being placed in the oven. Though Hollywood Pies could opt to use standard deck ovens for larger orders of 40 or more pies, they generally use the convection ovens, which allows for even heating at around 430 degrees. 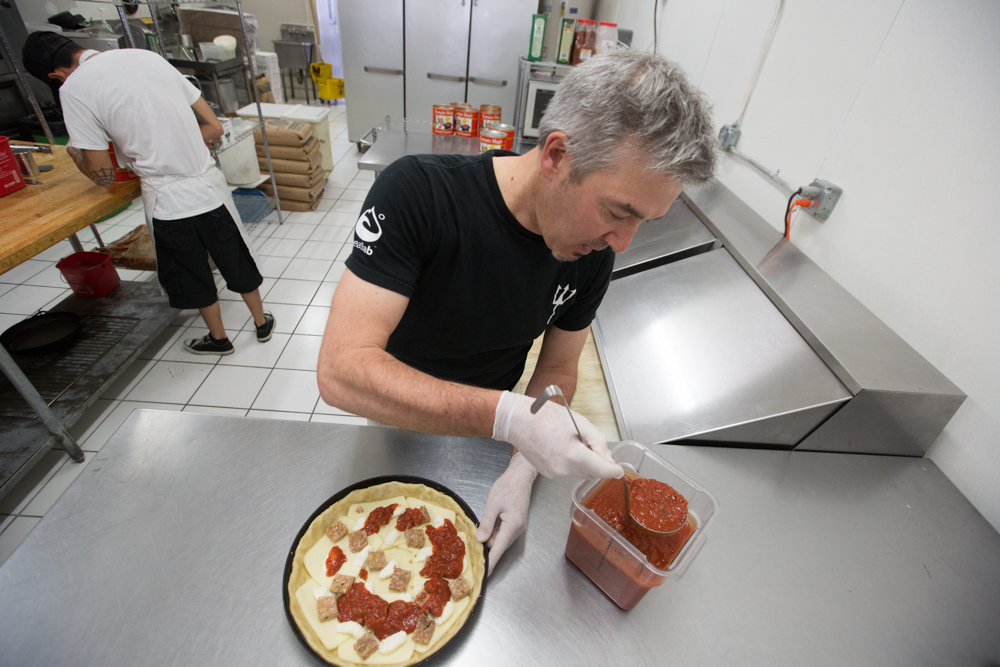 After half an hour, he lets the pizza sit for a while so that the crust can set and the ingredients can settle. A finishing of pecorino romato, and the pizza comes out to get sliced. Unlike other shops, Miscimarra uses a large chef's knife to neatly cut the slices. 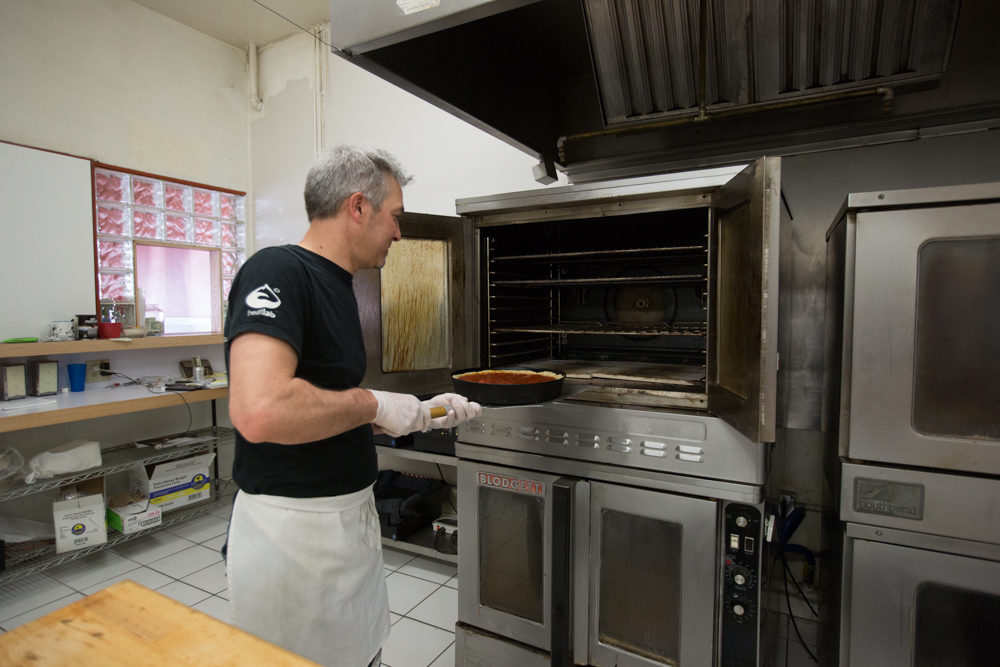 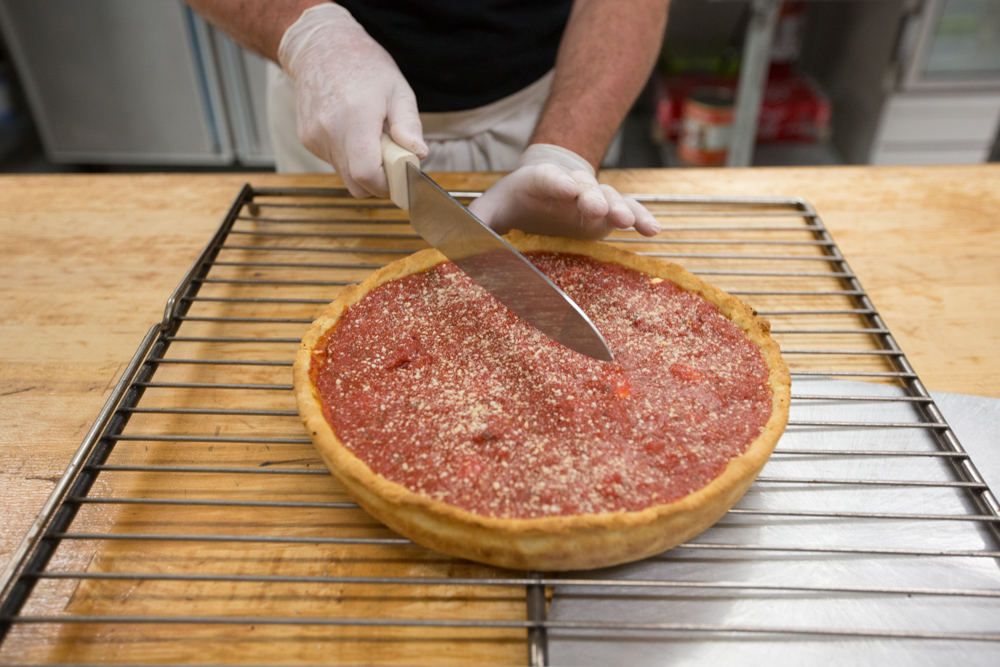 Hollywood Pies stopped delivering pizzas when they re-opened in November, allowing the shop to focus on take-out and dine-in. Also, Miscimarra is currently looking at another brick & mortar location to open within the next year, somewhere on the Eastside or Downtown. Pro tip: Miscimarra suggests ordering "native-style," which comes with crushed tomatoes, olive oil and oregano, which is similar to the original UNO. 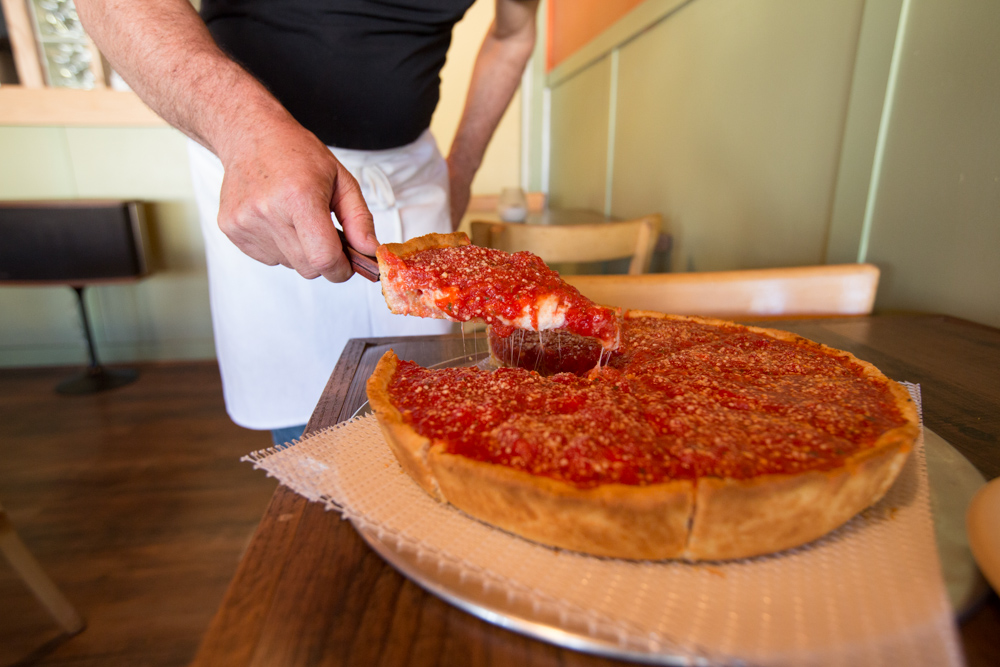