Eating All 18 Pizzas at Altadena's Pizza of Venice

Share All sharing options for: Eating All 18 Pizzas at Altadena's Pizza of Venice

In accordance with Pizza Week 2014, Eater bravely decided to eat through Pizza of Venice's entire menu, or at least the unique pies that give the Altadena pizzeria its oddball, off-the-wall character. Here now, an 18 pizza rundown, all consumed in one sitting. 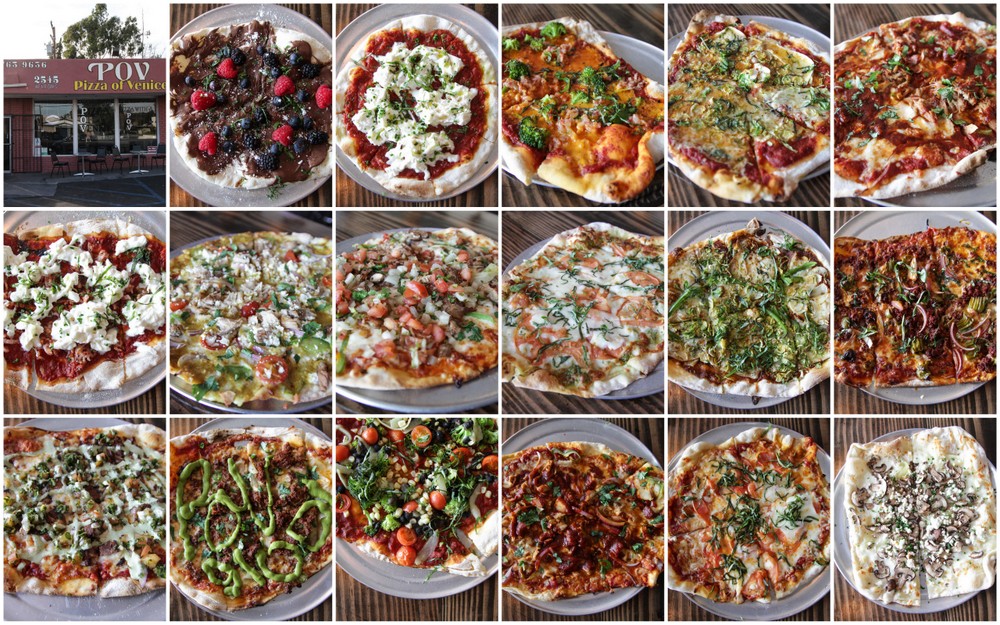 Sean St. John and co-owner Jamie Woolner started Pizza of Venice as a decidedly different take on how pizzas should be made. By not basing any of their approach on established methods, St. John and Woolner opened Pizza of Venice, not as an homage to the Italian city, but to the quirky Westside town. Since then, they've developed a reputation as some of the most adventurous pizza makers in the city, using everything from hyper-local produce to unexpected combinations of ingredients that might make a traditionalist cry. But perhaps, along the way, St. John and Woolner are creating a new kind of California pizza. Here now, Eater joyously eats through 18 of their signature pizzas in one sitting, and lived to tell the tale.

One immediate difference at Pizza of Venice is the shape of the pie. By adhering to a freeform, amoeba-like forme, it's a contrast to the more symmetrical circle shapes prevalent in most Neopolitan style pizzas. Second, the dough is a vehicle that contains all the unique ingredients. Which quite tasty, it's more of a cracker that keeps its texture after sitting out of the oven for a few minutes. Like nearly all ingredients used here, the dough at Pizza of Venice is made in house.

First, the Funghi pizza, which is a great pie for people who don't like mushrooms. A mild goat cheese binds everything together while the crackly crust gives a varied bite toward the edges. Altogether an easy start to this epic meal.

The Margherita is a straightforward take on the Italian classic. The sauce, which is made in house, is topped with more fresh tomatoes, basil, and a dense layer of cheese. It's probably like a very good frozen pizza, and that's in the best sense of the word. Predictable, safe, and really nothing like the rest of the pizzas eaten this day, and that's okay.

Next is the Barbecue Chicken, popularized by CPK and first introduced by Ed LaDou, who once worked at Spago and eventually went on to open Caioti Pizza Cafe in Studio City. This version made by St. John is pretty heavy on the sauce, though some tend to prefer the barbecue to be more prominent. The chicken is tender, though on the stringier, rather than chunky side, and gives a meaty balance. Definitely one of the better version of the barbecue chicken pizza out there.

The Vegan was next. It's hard to make a decent pizza without any cheese, but St. John pulled it off here, barely. Corn, black beans, cherry tomatoes, caramelized onions, and broccoli form the core of this pie, but without any cheese, the sauce become a little cloying, sometimes clashing with the vegetables. This would be much better with a dash of cheese.

The Braised Lamb was next. A favorite by LA Weekly critic Besha Rodell, this pizza started with six-hour braised lamb, then bulgar-less tabbouleh (isn't that just..parsley and spices?) and tzaziki. Though slightly on the salty side, it's a great pizza for those looking for a Greek-style slant on their pizza.

The Diablo is sure to be a hit with stoner-types (well, actually any of these would be good for stoner types), but mainly because of the high level of heat. Using house-cured chorizo as a base, caramelized onions, serrano chiles (which pack a punch), salsa verde and cilantro, it's definitely something best washed down with beer over a ball game.

The Sicilian is a creative variant that uses house-made pepperoni, shishito peppers, red onions, and olives. Think of it as a more refined take the classic pepperoni and olive available at any local take out joint. Shishito peppers add a nice extra layer of flavor.

The Brie and Blue is the pizza that features super-creamy Cowgirl Creamery brie, blue chese, and dusting of thinly sliced brussels sprouts. Definitely over the top, almost gut-busting, it's something for a true cheese lover. The blue cheese gives a salty counterbite that comes through despite the heavy-laden brie.

The Romesco is vegetarian pie that doesn't hold up on flavor. Using a red pepper sauce as the base, St. John piles on smoked mozzarella, shaved garlic, and Brussels sprouts for a vegetal, but overall quite delightlful pie. A tad salty though.

The Pestorita is similar to the margherita, but with a cashew pesto instead of tomato sauce. Reminds one very much of Wolfgang Puck's pesto pizza, or something from a freezer, but in the best sense of the word.

The Faijta starts with house-made carnitas that was originally prepared by one of the employees, it's topped off with pico de gallo, mushrooms (an odd ingredient here, but it works), onions, and peppers. Definitely odd, and might've been even better with some Tapatio on the side.

The Chicken Curry probably stood out the most among tasters, with a Caribbean-style curry sauce (St. John is from Barbados) that was definitely on the salty side. Made with yellow curry, Anaheim chiles, tomato, feta, and mozzarela, it's a good one to share for diners looking for a true oddball pie.

Next was The Mikey, basically a variant to the burrata pizza, which uses local Gioia burrata. With the addition of house-made pancetta, the entire pie gets a little chewier and meatier, though the pancetta perhaps would've benefited some more texture. Still, the burrata really shined here, dense, creamy, and quite tasty with all the other toppings.

The Fresh, Aged, and Cured is another hefty pie that starts with Hook's 5-year aged cheddar, which packs quite a punch. Then some thinly sliced pancetta and shaved Brussels sprouts over a good amount of tomato sauce. Think of this almost like a pizza version of Carl's Jr's Western Burger, but less smokey, more cheesy, and still quite balanced throughout.

The Barbecue Pulled Pork is similar to the chicken one, but with Anaheim peppers to give a little more spice. Not quite distinctive, but something different for people who already like barbecue sauce on their pizza.

The Burrata is more simple, but perfect for the cheese purist. Tomato confit and chive oil gives some extra oomph, but this is all about warm dough and slightly chilled burrata.

The signature POV is a bit of everything on overdrive. That fantastic Cowgirl Creamery brie as the base, tomato sauce, caramelized onion, which gives some requisite sweetness, and chive oil to finish it off. Another good one to share, as eating the whole pie could be way too much for the average diner.

And finally, the Dessert Pizza, using the same, crackly crust with a spread of Nutella, then dotted with fresh berries, mint, and powdered sugar. After eating so much pizza, it's hard to imagine that one could enjoy this, but for a sweet tooth, it's actually a terrific end to the creative pizza making.

At the end of eating such a tremendous amount of sauce, dough, and cheese, it's hard to reflect upon the experience here. Eating through all these pizzas was quite unnecessary, and trying two at a time would be no less epic. The flavors are mostly on point, and knowing that almost all ingredients save for the cheeses are made in house definitely helps. But a studied look at what St. John and Woolner are accomplishing at Pizza of Venice yields one simple result: The creative pies here are a refreshing take, and the locals are seeing the light. It's a trek to get to this sleepy strip mall up in the foothills of Altadena, but a slight detour from Pasadena or Glendale might be worth the time.
·All Pizza Week 2014 Coverage [~ELA~]