Share All sharing options for: 12 Things to Know About Faith & Flower, Opening April

The kitchen is helmed by Michael Hung, former chef de cuisine at SF's La Folie, along with desserts by French Laundry alum Ben Spungin. The bar will be overseen by Michael Lay of 1833. The expansive eatery is shaping up to become Downtown's next truly grand establishment along the lines of Bottega Louie. Here now, 12 facts to know about Faith & Flower, which should launch within a few weeks.

1. Faith & Flower was intended to connect to the history of L.A., with overall motifs of dressing rooms, Broadway's former theater district glory, and the mansions of Grand Avenue in decades past. The design elements hark back to the late 1800s and early 1900s, essentially what the Gilded Age might have impressed upon L.A.

2. The main wall from the front entrance is almost entirely made up of vintage doors from the early 1900s. The only exception is one door that was once a dressing room door for Bob Hope. Not quite as old, but still pretty cool.

3. The golden chandelier just over the raw bar uses over 4,000 feet of chain.

4. The main mural to the left of the entrance is done by renown street artist Robert Vargas, featuring a visage of a woman.

5. 31 caricatures from Vargas will be framed and displayed in the hallway to the restroom. Each one is of a person that was instrumental and inspirational to the founding of Faith & Flower. Each individual will know which caricature is his/her own, making every other drawing a mystery.

6. The bar program by Michael Lay features seven different kinds of ice made by a local company that specializes in cutting ice. In addition, Lay will make all tinctures and syrups in house.

7. The raw bar will offer oysters, live uni, toro, and other fresh fish, holding off the right corner of the space.

8. The host stand is actually an original ticket booth from an old theater in Downtown. The glass enclosure is a few steps away and will be used to store glasses for dining.

9. The largest mustard velvet Chesterfield booth in the world will sit in the main dining room and stretch across multiple tables. The booth, along with the chairs, which had to be redesigned three times, are made by local LA-designer Lily Jack. 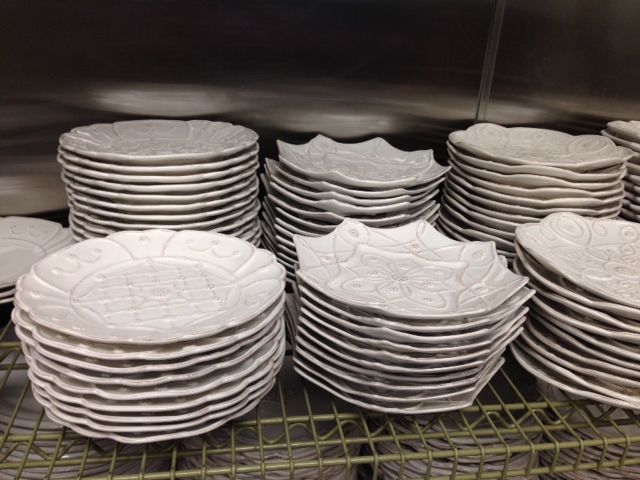 10. The wine glasses, bar glasses, and plates will all be ornate vintage, and a little bit rustic.

11. The two-story kitchen is more than big enough for the 140-seat dining room, and plans to be the foundation of a catering operation as well. Among the kitchen gadgets? A wood-burning oven and wood-burning grill. Wood, all the rage these days in kitchens.

12. The 30-seat outdoor patio will be hedged in and covered with greenery and ivy, isolating it a little bit from the hustle and bustle of 9th Street, which should make for fantastic al fresco dining in the summer.
· All Faith & Flower Coverage [~ELA~]