Why Thirsty in San Gabriel

Share All sharing options for: Why Thirsty in San Gabriel 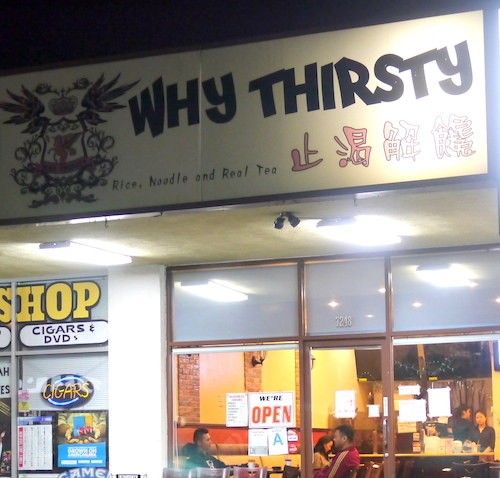 Why Thirsty opened for business in November 2011 and has become one of the quiet successes in the Taiwanese tea lounge slash diner scene. While it took Jonathan Gold 17 attempts to understand Taiwanese food, the appeal of Why Thirsty is apparent to the locals. Unlike other colleagues, this North San Gabriel dingy dive hasn't depended on the vaping late night crowd, nor motorcycle nights, nor monstrous bowls of shaved snow for its survival. It's really just about wholesome affordable comfort food. And chewy boba. 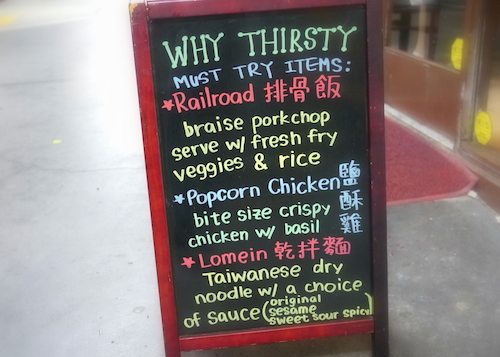 Nearly the entire menu at Why Thirsty is $8 or less, and the portions border excessive. Hungry post workout guys come here for a quick carb reload; dainty women order the massive bowls of noodles to go. There are two ways to go about filling one's self up here, and family-style isn't the default. Lunchers and solo types go through hundreds of pounds of railroad — named after paper bento boxes consumed on the kitchen-less trains that connected Northern and Southern Taiwan — pork chop over rice every month. The signature pork chop is breaded, fried and quickly braised, yielding a soggy exterior. It's an acquired love. From the noodles column, the satay beef noodle soup, an amalgam of Chinese and Southeast Asian flavors, exhibits all that is right with Taiwanese cuisine. Yet the best dish of all, especially during summer, may be the cooling and extraordinarily simple cold chicken lo-mein "salad" that is the bread and butter of many open market stalls in Taiwan. 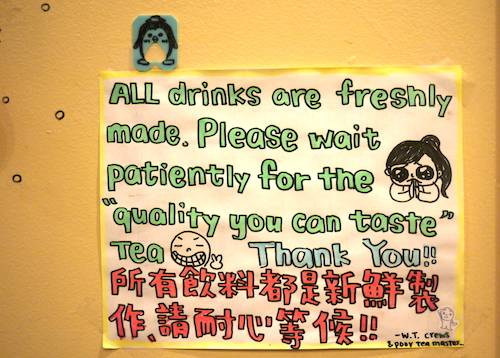 Popcorn chicken, perhaps Taiwan's most popular and infamous street food, is exemplary here. While no MSG is used, the salty nuggets of fried dark meat taste of addictive white peppers and chili powder. Order it spicy and calm the tongue with bits of fried Thai basil. The most popular tea here is the Assam milk tea. Request it with half sugar with milk, and taste a Burmese milk tea fused with Taiwanese culinary pride. To go really deep end, order the Formosa milk tea, stuff it full of eight treasure gruel and mango pudding. Surely a restaurant sporting bible verses and reverse osmosis water won't judge. 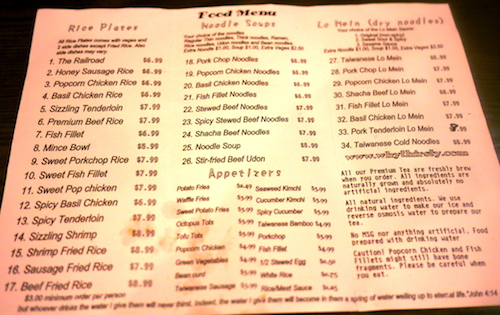 · All Dining on a Dime in the SGV Coverage [~ELA~]