The second branch of (Mama) Lu Dumpling House suffered extreme damages yesterday shortly after 3 p.m. when a Monterey Park Fire Department fire engine slammed into the restaurant after being struck by an Alhambra Fire Department ladder truck. The damaged fire truck sat inside the bombed out restaurant for nearly six hours before being pulled out.

The damaged property is Mama Lu's second restaurant, and the least busy (hence only four of the injured were from within the eatery). It operated awkward hours and featured little parking, though it was recently remodeled. A banner announcing extended hours was just hung this month. Overnight construction crews erected support beams and the restaurant was fully boarded as of this morning. 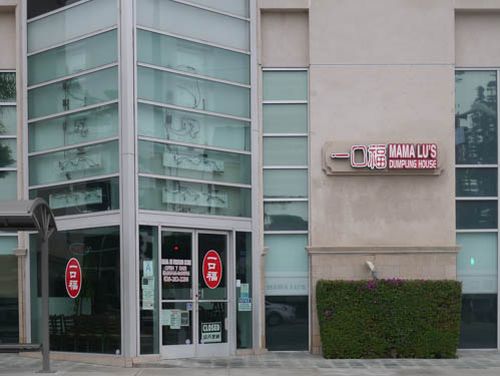 The two fire trucks, both with lights and horns on when the accident occurred, were responding to the same fire alarm. There are no reports whether the house on fire was saved. No news as of yet from restaurant management on the rebuild of Lu Dumpling, but Chinese social media is already marking this location as cursed since it is the second traffic accident it has suffered. Xiao long bao lovers fear not as the more popular branches of Mama Lu #1 and #3 (seen above), both are Garvey Avenue in Monterey park, are still open for business, as are the rest of the restaurants in Eater's best Chinese soup dumpling list. [EaterWire]