Share All sharing options for: Beau du Bois of The Corner Door 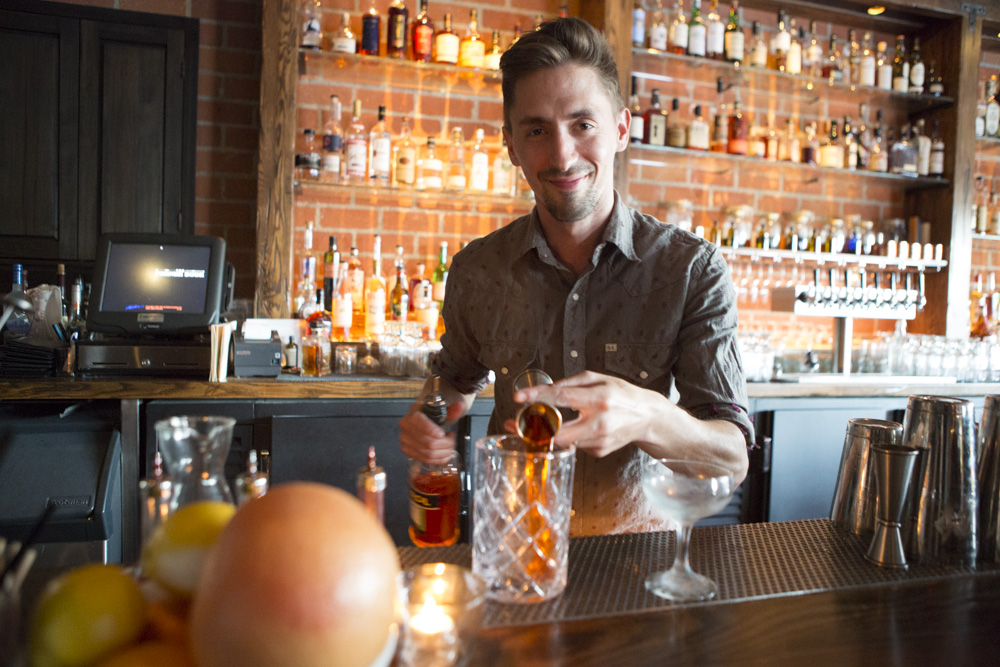 The Corner Door opened in 2012 with the simple mission of being the best neighborhood restaurant in Culver City. Well, for the most part, it has succeeded because of its reliable pub fare and a strong drink program helmed by Beau du Bois. Though chefs have come and gone, du Bois is still behind the bar on most nights, constantly innovating without breaking the mold so much that regulars will get scared to try new things. Possibly the most underrated menu in town, Eater sits down with du Bois to talk about his process, and the future of cocktails in L.A.

How did you get into bartending? I started when I turned 21. There was this martini lounge that all the professors would go to when I was at Ball State in Indiana. One day the owner asked me if I wanted to stay during the summer and work there. I told him I only knew how to make a vodka cranberry. He asked if I went to bartending school, which I told him no. That's when he said, you're hired.

What's wrong with bartending school? He said if I did go to bartending school, I wouldn't have been hired. I think when you go to school for it, you're not as flexible. It becomes very difficult to learn a different way. Many of the professors at Ball State were from Chicago, so they were really into the knowledge aspect behind cocktails. I ended up becoming the manager within 6 months. I was really into making drinks because of the heritage. It's been such a lasting tradition here, basically since the dawn of the nation.

When did you come to LA? I came in 2005. Like anyone coming to a big city, it was tough getting a job at first without any other major city experience. I finally locked down a job at the Riot Hyatt on Sunset. It was just before they were going to renovate it into the Andaz. After a while they were like, we created this head bartender/mixologist position, do you want it? I was underqualified; I'm not sure how I got the job. But I used that to open my eyes to the cocktails that were happening in L.A., like at The Varnish. The concept of RH, the restaurant inside the Andaz, was very much farm-to-table, and a lot of cocktail programs weren't doing that at the time.

What kind of drinks were you making back then at the Andaz? It was the perfect time for farm-to-table stuff. All the drinks were bright and fresh. One of my signature drinks, the Mr. Plant, was made with gin, agave, tangerine, cucumber and club soda. It was super refreshing. The management told me to have a drink inspired by Robert Plant of Led Zeppelin. He got to try it one day and he was being very polite. I thought to myself, he'd probably just drink Jack Daniels from the bottle. Basically the cocktails there were base spirit, fresh fruit, and a creative presentation. Nothing too crazy. We didn't push the envelope too far. There also wasn't a huge focus on stirred cocktails. 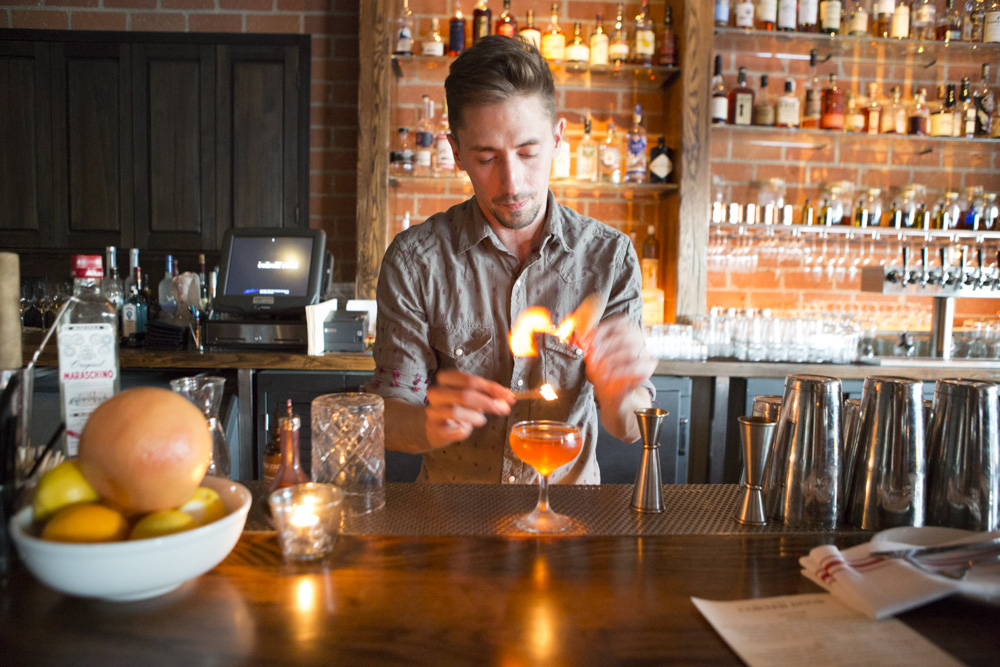 And then you ended up at M.B. Post, what did you bring there? My wife and I had left L.A. for a while and wanted to come back. I thought M.B. Post had a great chef and great concept. It's crazy that a neighborhood that was so well cultured and traveled didn't have a great cocktail program. At first we had to be humble about peoples' preferences. We had a lot of men in their 40's drinking Kettle and soda. We'd make an Old Fashioned and then they'd say, what's that? We'd explain the rich history of the drink, and they'd really get into that. After about two months, they really got into cocktails.

And now finally, The Corner Door. What led you to do the program here? When Todd Jerry and Tony Falati described the concept, I thought it represented the next step in cocktail making that M.B. Post had no reason to take. I think at M.B. Post they got the cocktails to where they wanted, but it's such a food driven place. Here at The Corner Door, Todd and Jerry said, hey we know you really love making cocktails, and we want someone to come in and keep the ball moving forward. It was a huge opportunity because it's rare to find owners who trust you and get whatever you need.

What was your vision for the cocktails at The Corner Door, and do you feel like you've succeeded? I wanted to offer the same level of cocktails that you'd find at Eveleigh or The Varnish or Cole's, but with a warm atmosphere that's inviting and casual. I feel like the cocktail program here removed any sense of pretension. The bartenders here have to remain humble and approachable. We opened in a neighborhood where people love to go out and eat, but might be new to cocktails. Bartenders are constantly asking guests about their preferences, and then spiraling off from there.

What about trying to appeal to the cocktailians, people who go out for drinks every night? That demographic is so small compared to everyone else. If you base your program around that, you won't be able to maintain business unless it's multiplied by ten. I'd say cocktail enthusiasts make up 10% of business here, and for this location, this program works so much better. You don't have bartenders wearing bowties and suspenders. Nothing against The Varnish. But when I go to places like that, I tell my wife that I don't think I'm cool enough to be there.

What are the underrated things that you're doing behind the bar? We're really focusing on DIY. It's such an advantage to be a program that makes its own ice. But we have time to make our own vermouth, our own amaro. You can't distill your own whiskey, but we try to put your thumbprint on things without breaking the bank.

What are two cocktails on the menu that you're really liking right now? One seasonal drink is the Midwest Lap Dance. I'm not usually a spicy cocktail fan, but this one has such a sense of nostalgia because of the atomic cordial that we make that marries heat spice with cinnamon spice. That balanced with bourbon and maraschino makes it two dimensional, but then we hit it with bitters, which makes it a total game changer. I really like the Moscow Mule on tap. We spent a month creating a ginger beer base, which is then loaded up into a Cornelius keg and attached to CO2. We were just so unhappy with commercial ginger beer. This way, the whole drink is carbonated.

Where do you think cocktails are destined to be in five years? As we're cheering on this revolution, there are huge challenges ahead. People have choices in every city, and you have to think, as a proprietor, bar manager, or mixologist, I would rather spend this place. We're going to keep creating things that you can't get anywhere else. I also think that snobby bartenders aren't going to fly anymore. When I see that kind of snobbery, instead of humility and sensitivity, I'm just blown away.

Why do you enjoy doing this? It's one of the best avenues for creativity. You're blending creativity with boundaries. I mean, it's still a job, there are things that are menial and tedious, but doing this reminds me of having a cocktail party every night at my house.

When you're in the weeds, how to you handle all of the orders? I'm pretty binary, and I tend to process things in a sequence. I become very quiet and focused on what I'm doing. I'm okay with making tons of drinks at a time, but it gets tough when people try to order at the same time, or if someone tries to ask me a question. It gets so busy here, as a bartender you have to recognize people. I think half the battle is making sure people feel acknowledged. People will forgive you if they feel warmly invited. They can see that you're busy. Stay organized, smile, and thank them.

Are you guys looking to get another location? We're hunting day and night for another place. That's no easy game. It won't be another Corner Door, but a place that focuses primarily on cocktails.
· All The Corner Door Coverage [~ELA~]
· All The Barkeepers Coverage [~ELA~]