Share All sharing options for: Yeekai Lim of Cognoscenti Coffee

Welcome to the first installment of The Baristas, a regular feature that chronicles the daily lives of some of the most talented ladies and gentlemen in LA who are passionate about serving coffee. 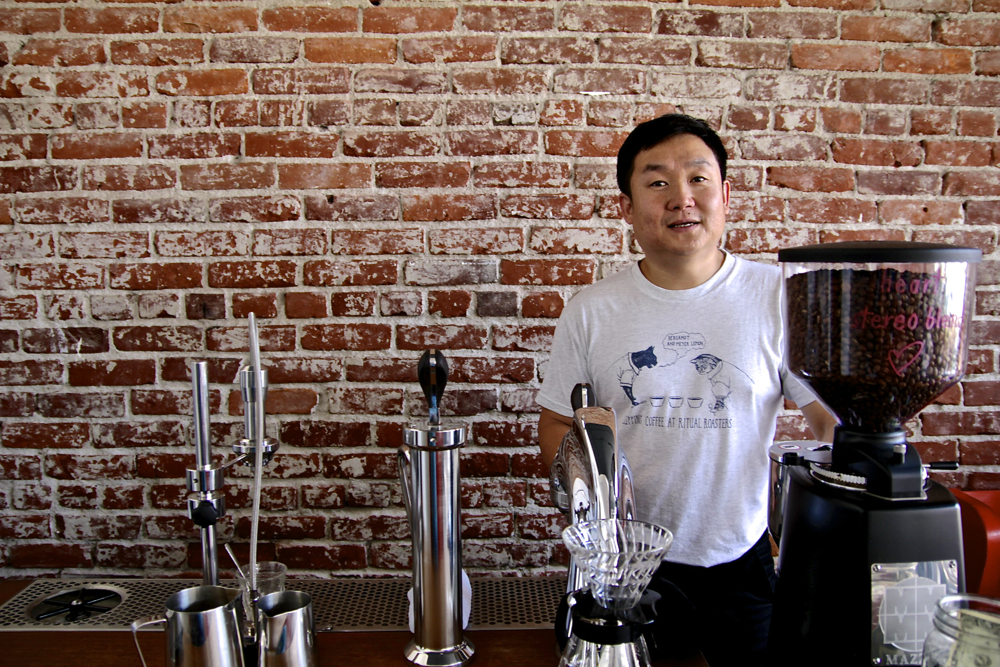 Yeekai Lim left a career in architecture to pursue his one true passion: coffee. Since then, Lim has been instrumental in changing the specialty coffee landscape in Los Angeles. First, a humble pop-up, Cognoscenti Coffee, in Eagle Rock, and then a more perma-pop at Proof Bakery, which erupted with popularity in Atwater Village. Then last year, Lim opened his stand-alone shop in Culver City's Arts District inside starchitect Clive Wilkenson's offices, becoming one of the more notable places to drink coffee on the Westside, let alone the country. Here now, Lim talks about his journey from architecture to coffee, and what he's working on right now.

What made your change your career from architecture? When I was doing it in 2009, projects started drying up and I somehow got blown away by coffee. It tasted so amazing. From there, I started reading a lot and introduced myself to this other world of commodity, and how it connected to all these different countries. I love the worldly aspect of it. I got really excited and started brewing at home. I eventually realized that the best way to try more coffee was to just serve it to the public. That's when I started the pop-up.

How were those early days? It was fun. Long days of sitting around and waiting for customers, but the ones that did come were really interested. From the customer side, they were probably thinking, what's this guy doing here with all these unique coffees.

How did you learn the craft? I went to coffee school, but that was really general and more for the business aspects. I did some workshops at the Barista Guild, held by the Specialty Coffee Association of America (SCAA). I also went to some Intelligentsia workshops in New York when I was out there, but it was the basics of espresso making.

What's your favorite part about making coffee? Obviously getting into the shop. I know it sounds cliche, but coming in, doing the first grind, going through the ritual of opening. When you do the first batch brew, when you dial in the espresso and make the first cup. Those personal moment when you're alone in the shop and waiting in anticipation for the first sip. It excites you for the rest of the day. It provides you with a benchmark for what you're going to be talking to customers about for that day. And being on the bar because I love the opportunity to be able to talk to people who love coffee equally as much as you do.

When's the best time for those kind of interactions? It's hard when you're making quality drinks. Right now at Proof we only have one bar that does everything, so the best time is to come around lunch or the afternoons, when we have our slow periods. That's the best time to come and hang out.

What's the worst customer experience you've had to deal with? It's when they don't get what you're doing. All baristas have encountered difficult times. It's not different than working in a high-end restaurant. When you're presenting food that is different than what people are used to, you have to focus on customer service. You have to think of coffee as a high end product. Even though the price point doesn't justify that kind of service, I think the interaction is invaluable and provides an added experience.

Coffee is different than alcohol or food. Everyone has their own personal coffee habits, so that's challenging. In general, I think the exposure is just growing for specialty coffee, kind of like a renaissance we had with wine. There's a vast exploration of flavors and mouthfeel, which is exciting. But the big difference is that coffee shops are run mostly by younger people. If we had a bunch of sommeliers running the shop, you would have a much different perception from customers. The nature of the industry is that it requires a lot of energy and endurance, almost like working in the kitchen.

How do you know when someone that orders the coffee is really into it? You usually can't tell unless they start asking questions before they order. They say, this is what we like, and we tell them what we're liking right now, or what's tasting good. That was once a question that someone in the industry would ask, but now it's customers. Once they've built up a trust, then they most likely won't be disappointed.

What's the best thing that's happening in coffee right now. For one, that it's growing. The most important thing is that the general public is getting on board. It forces everyone else to be on point. Also, I'm starting seeing more shops doing their own roasting, which gives owners more control of the coffee.

What would you say is your best overall experience you've had with coffee? I remember getting my first Synesso espresso machine from Heart Coffee in Portland. I drove all the way up and back. I think every single person in coffee geeks out about equipment because you think it'll make the most amazing coffee. But then you realize, it's kind of the same as the last machine, just that you paid more and it's shinier.

If you could revolutionize one thing about the way coffee is served and made right now, what would you do? I've been thinking a lot about do-it-yourself. It's like making your own yogurt. There's something novel about people taking ingredients and making something without knowing the outcome. There's opportunity to explore every element of the beverage. Also, I think we should have a milk menu because milk is the majority of the drink. For example, organic versus conventional, or different producers.

What's your current favorite brewing method? I just do filter coffee at home. Right now, I'm using the Kalita, but I'm frustrated at the cost of the filters. When I brew, I start with 25 grams of coffee, brew for three and a half minutes, and put in 400 grams of water. I make sure the water temperature is on point.

What are some other great coffee shops you like around town, and around the country? I haven't had much time to go and visit these days, but Copa Vida always has a nice experience. I'm excited to see Bar Nine Collective take off and gain some traction. I enjoy going to Grand Central Market and visiting G&B Coffee, and get some EggSlut while I'm at it. I love Heart in Portland. Their space is great because you get to see the process, from roasting to the cup, all from one seat.

What's next? Right now we're doing a daily pop-up at Good Girl Dinette in Highland Park. It's is one of my go to for good food and I really enjoy the diner vibe, casual and comfortable. Jack Benchakul and I partnered up with a Modbar cart concept and decided to reach out to Diep Tran about providing a curated coffee program. We're there Tuesday to Friday 8-3 p.m. and weekends serving espresso and single cup coffee to pair with their brunch menu.
· All Cognoscenti Coffee Coverage [~ELA~]