Jeronimo Medina on Testing and Tasting at Fifty Seven

Share All sharing options for: Jeronimo Medina on Testing and Tasting at Fifty Seven 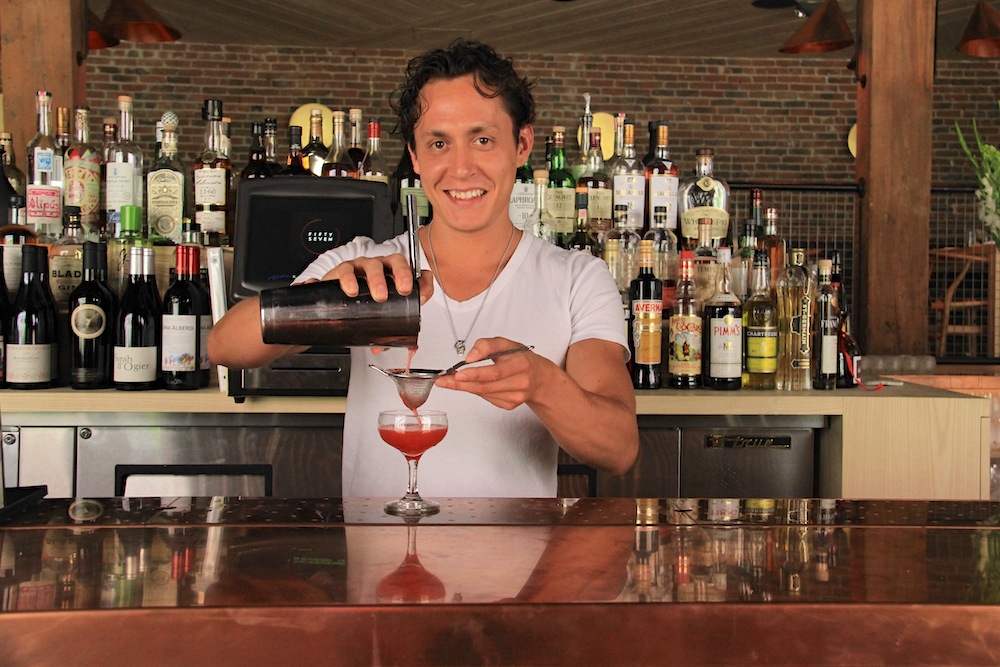 When Cardiff Giant (The Hudson, The Churchill, Clover Juice) conceived of Fifty Seven, their newest venture in downtown's burgeoning Arts District, they knew the bar program would need to be fluid — in more ways than the obvious. Fifty Seven is a concept meant to change seasonally; there will be a new chef and menu every few months. Opening chef David Nayfeld, formerly of Eleven Madison Park, picked Jeronimo Medina to head up the bar program. Recently, Eater sat down with Medina to hear how it's done.

Along with Brian Simpson — who oversees the bars at all of Cardiff Giant's places — Medina created a menu that complements the seasonality of Nayfeld's food. Though Nayfeld will soon leave Fifty Seven in another chef's capable hands, Medina is a permanent fixture at the restaurant and will work with the next chef on the next cocktail list. 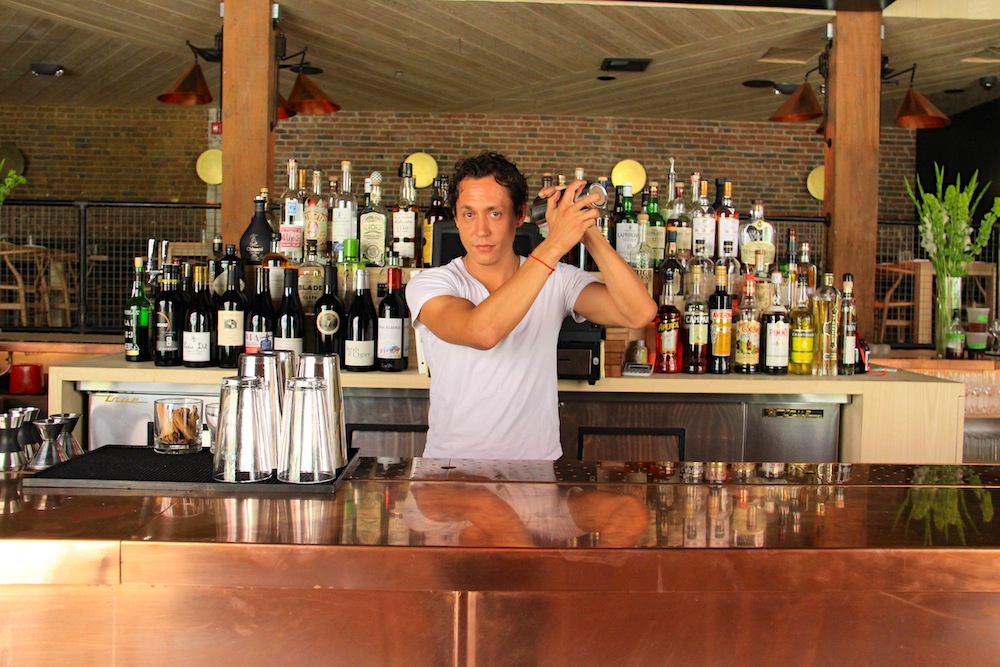 What were you doing before you got this gig?
I came to LA from New York to pursue a career in acting. I still work as an actor, but I've been tending bar in LA and New York for about eight years. It wasn't until I moved to LA and got a job at (Cedd Moses') Las Perlas that I became really interested in the idea of mixology. I love playing around with flavors and spirits. After Las Perlas I worked with chef Eric Greenspan at The Foundry on Melrose until it closed.

How did you meet the group behind Fifty Seven?
Through my roommate, who also has a job here. There was a long interview process [at Fifty Seven], but eventually chef [Nayfeld] offered me the position of head bartender.

What was it like, creating a menu for Fifty Seven? Do you work closely with Nayfeld?
Along with Brian [Simpson] and a co-worker of mine, Jenae Kama, we came up with the menu from the ground up. We work with the same farmers that chef [Nayfeld] uses. When I present a drink to [Nayfeld] I know he's going to give me the missing piece, that extra angle, the surprise, the mystery that the drink needs. It's always a team effort, everything we do here. Every cocktail goes through at least six different tongues. Everyone here is passionate about the same thing, so we all bring that passion to the table.

It's also about taking risks. It's those risks that can take you very far, but at the same time, there's a little nervousness behind it, but you have to take the risk to see how it reacts with people. There's almost adrenaline in testing a new cocktail. Because I want to satisfy people's palate. It's a new joy that I find a deep passion all the time. I think about it all time time, sometimes I can't sleep because I'm thinking about a cocktail. I find it intriguing because it's a form of expression.

What's your goal with this menu?
What we're trying to do here is to bring in different elements of drinks that haven't been explored before. Odd combinations. I believe that people — not just with cocktails, but with food, and with life, that people are seeking different things to stimulate them. There's mystery in everyday life, we know that. And I love creating flavor combinations that seem mysterious. My aim is to create a mystique around these cocktails, to keep people guessing, to pique their curiosity.

Did you discuss anything with chef regarding the food and what was on the menu and what kind of drinks would work with those flavors?
Yes, this was a discussion. Even before we tasted the food, there was a lot of talk about style and flavor. Then, through recipe testing, we would discuss how we could pair the cocktails with the food. Because his food is very delicate and there were so many flavors in it, we had to make the cocktails match that. One that's been a hit is the Morbrie. It's made with Pakistani mulberries, lemon, Aperol, ginger, honey, rhubarb-infused gin, and has orange flower water misted over the top. 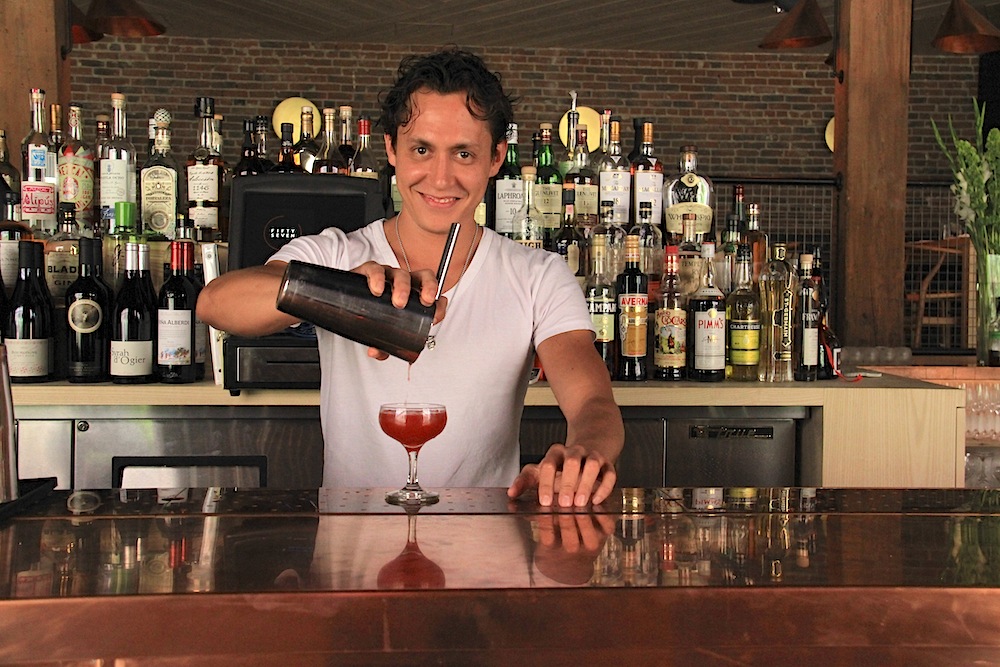 What are some ingredients you're looking forward to working with this summer?
Nectarine, cucumber, and I want to try to find fruit that people don't generally use in cocktails. Honeydew, papaya. I love infusions.

Is there a spirit that you think is misunderstood or under-appreciated?
Mezcal. I love Mezcal. It's come a long way in the industry already, but we still have to work to dispel the notion of the "worm," and the bad connotations people have with that. I don't think it needs to be put in a cocktail to be appreciated, but that is sometimes a way to get people to try it. I love it because it gets you drunk in an intellectual way verses a physical way… I want to give it the respect it deserves.

What nights are you behind the bar?
Wednesday, Thursday, Friday, and Saturday.

What's the best night to get a seat at the bar?
It really depends. Wednesday or Thursday, but if you come early, before 8 p.m., you'll probably get lucky.