Share All sharing options for: Cassell's Burgers, Le Comptoir Coming Along in K-Town

Though the lobby and rooms inside Koreatown's Hotel Normandie have been almost completely refurbished thanks to architect and preservationist Jingbo Lou, the property's eateries are still very much under construction. As previously reported, Cassell's Hamburgers is coming back from the dead. Under new ownership, but featuring the restaurant's original double broiler (designed and hand-built by Al Cassell himself) and recipes (those half-pound burgers and that famous potato salad are coming back), it will re-open this summer. 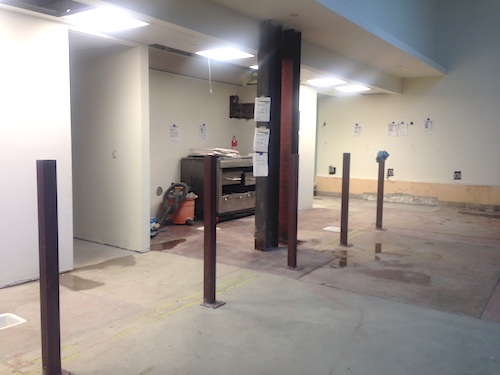 Chef Gary Menes' Le Comptoir will open this August in a tiny space on the north side of the building along 6th Street. According to Menes, the restaurant will have nine bar stools and an open kitchen. The menu will be entirely vegetarian. Menes plans to require diners to pay a deposit for their meal in advance. "It's an exchange. It's a trust issue with both of us. You're trusting us to create a dining experience for you, and we trust you to pay us. As with most other exchanges of service for payment, you have to put a deposit down," Menes explains. The chef will grow all of his own produce for the restaurant on a 1/8-acre lot he has in Long Beach.