Finding a pristine plate of oysters on the half shell in Manhattan Beach was a tough order before last May when chef David LeFevre opened Fishing With Dynamite. Also the owner and operator of M.B. Post, which opened way back in 2011, LeFevre had been wanting to do seafood in the South Bay for quite awhile. "I thought of this concept — we thought of this concept before we opened up Post. But the space didn't become available until after we'd already opened Post," says LeFevre about the roll out of one of the city's most successful old school-meets-new school seafood shacks. Recently, Eater sat down with the animated and affable chef and owner to talk about what it's like one year into shucking oysters at Fishing With Dynamite. 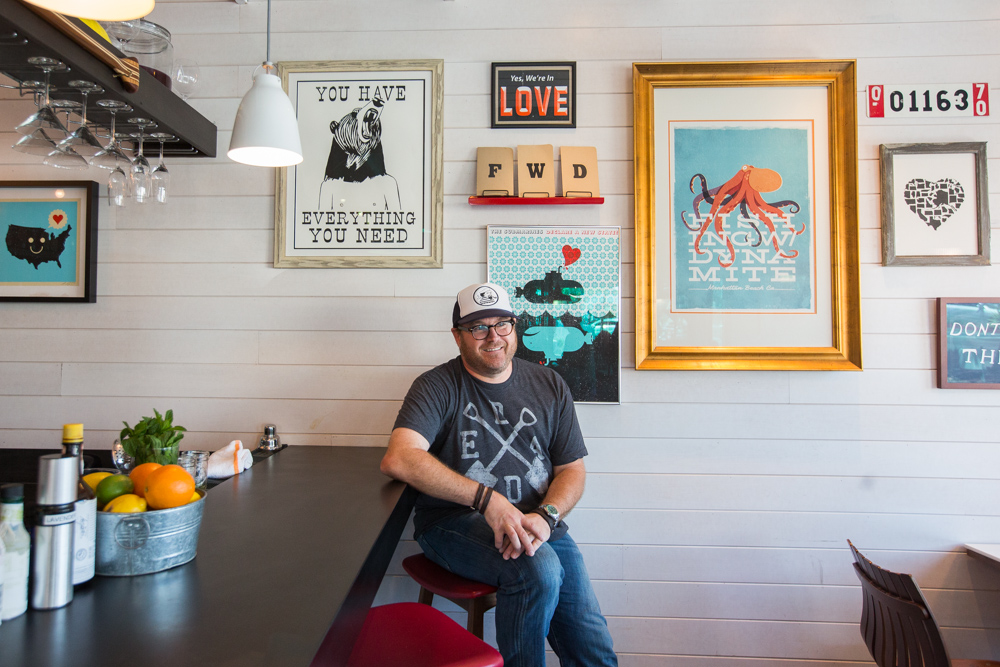 How long had M.B. Post been open before you started thinking about opening Fishing With Dynamite? I knew I wanted to do a seafood concept before I opened Post, but I never ever thought about doing much seafood at Post. That space screamed a different restaurant. When I think of a great oyster house, this space [speaking of Fishing With Dynamite] was the size that we thought we could get the feel and atmosphere for a great American oyster house.

You took over Talia's, which had been in this space for awhile. Was that a difficult transition? Talia's had been here for almost 30 years. Ron and Lisa are the owners, and it was named for their daughter. They've been part of this community forever. They have other businesses too — Ron works with Eureka burgers. I think it was time for them to move on, but it was important to them that they know the people who took over the space. There's a huge responsibility on our part… that you're respectful of the history and making sure that that process is one that's comfortable for them. I respect them highly.

Did you use the same design team as you had with Post? No. For this space, we worked with FC studios out of Chicago. I've known Rachel [one of the owners] since the late '90s. I knew from the restaurants that she's designed that she and I were very in line. I picked all of the artwork. I had a very solid vision of what I wanted. I wanted these Eames chairs, the fiberglass ones. There are rip-offs everywhere, but I wanted this specific bar stool. The artwork, the design of the oyster bar, the skateboard trucks for purse hooks under the bar — I picked it all out, and sort of served as creative director for the whole thing, which was great because Rachel got it right away.

What changes did you make a month in? We opened for lunch a month in. The kitchen is very tiny and we didn't do much to it when we remodeled the space. Right away the demand we had for the restaurant exceeded what we were expecting. We had to install brand new refrigeration and a plating line opposite the hot line because we just didn't have enough space for it to really work. I knew that if we changed the entire kitchen at the beginning, we'd probably have to change it again. Literally it's such a small kitchen we could install a whole new kitchen overnight. For both restaurants — Post and here — we underestimated the demand we had. You expect the best and plan for the worst.

Did you make any changes six months in? A restaurant is always a moving target. Whether that's the menu or the labor or the music or the beverage menu. Six months in we started focusing more on making our lunch menu more accessible, we focused on providing some more lunch-style dishes, lighter fare, sandwiches, salads, but within the hand-crafted soulful and artisanal category we work within. It was also around this time that we realized that a lot of people at dinner were looking for more luxurious items, caviar, uni, that sort of thing. People for lunch were just trying to find less sharable things, more individual items.

Why do you think there wasn't a place like this in Manhattan Beach before you opened it? It's modeled after a fish bar in the Hamptons, and that's why we called it Fishing With Dynamite. I knew it was going to literally be like fishing with dynamite. I knew it was going to kill. There are other seafood places here, but they're not focusing as much on sustainable or raw bar stuff. People loved the seafood we did at Post, so it was a no brainer. The challenge is that seafood is a hard thing to do well, and you have to provide great service along with the great food.

How has the menu evolved over the past year? I told you about the lunch menu and how that changed. The physical menu itself has changed to make it easier to understand. Originally we had a folded menu that I thought was really great, and it turned out that the guests didn't think was as cool as I did. For me, I have a big eye for detail and sometimes it doesn't correlate with what will work for the guest. We made it simpler to be able to order right away, it's now one page, front and back. We've also been doing more really luxurious items that we didn't think we'd put on the menu. King crab, koshihikari rice, blue crab, spot prawns, sea urchin… They are high cost ingredients and our guests out here love it. What we stuck with was getting the best quality fresh seafood.

Do people ever ask about the sustainability of the seafood you're using? Not every day, it's sporadic. What people ask is they want to know where we source from. Who supplies you from your oysters, that sort of thing. And we get them directly from farms. People care about how fresh the product is, that's the most important part. Just last month I worked at Moro Bay oyster farm, went on a Dungeness crab boat, went out on a shrimp boat. Next month I'm sending four cooks and four managers out there to see what it's like, to see what it takes. 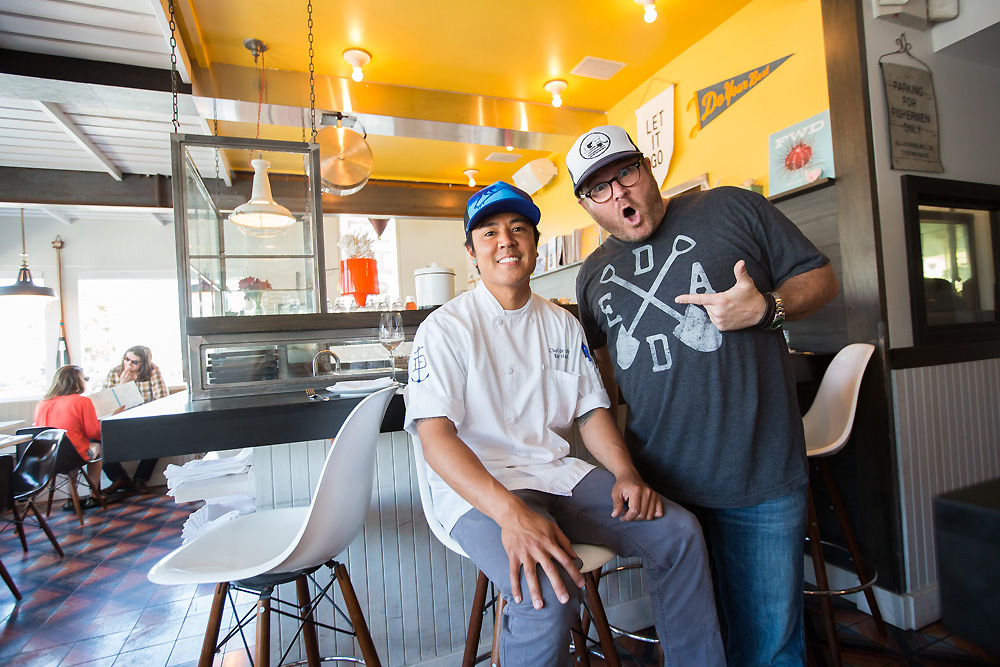 There's frequently a line out the door to get a seat here. Do you wish Fishing With Dynamite was bigger? No, this space is great. It's like asking do you wish your kid played an instrument. For me, the business it does with the size it is is insane. I don't wish this to be anything else. We could have another 10 seats, 15 seats and we wouldn't have to change a thing. But 15 more seats might make this place that much less cozy, and then you could lose the feel.

Which dishes do you think best represent your goals for FWD?

What are the most popular dishes? Is there anything you can't take off the menu? I think there are certain items that people freak out about. The oysters, obviously, but actually I would say that the chocolate bread pudding: soft pretzels with salted caramel and chocolate. If I took that off the menu, people would scream. And it would be dumb. People like it and you want to give people what they like.

What's on the horizon? Making these restaurants as great as they can be.

Could you see yourself opening another location of Fishing With Dynamite? Maybe. Seafood's tough operationally. Without my chef, Ray Hayashi is a great chef who has a great attention to detail and who has his finger on the product every day, hour, minute, and you need to have an operator like that who's extremely detail oriented when it comes to product because seafood has such a short life, and it's such a fickle product that you have to have incredible operators to make it work. Part of it's training, but a lot of it is having someone passionate. He's super passionate about it. For me me, seafood is not the easiest concept to reproduce. There are very few people who do that well. It's all about good people. It's all about surrounding yourself with better people than you are.

For me, the best part of my life, is being surrounded by such incredible people in the restaurant. My crew is just so dedicated. They love the product and they love the neighborhood and they are people pleasers and they love taking care of people. When you get to choose those people, the quality of your life is so grand. And then to have incredible guests on top of it. I feel really lucky.
· All Fishing With Dynamite Coverage [~ELA~]
· All One Year In Coverage [~ELA~]