This here is Sin City Wrap, a weekly recap of notable Las Vegas goings on from Eater Vegas, just in time for summer. 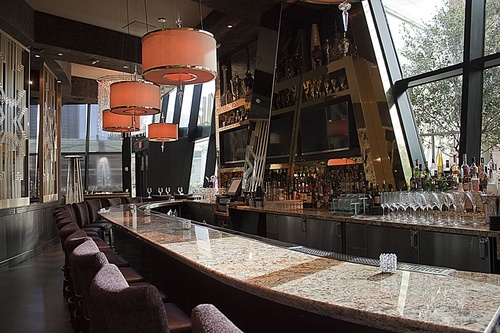 SHe by Morton's [Photo: Chelsea McManus]

SHOPS AT CRYSTALS—Eva Longoria's SHe by Morton's has shuttered after about a year long run. Originally a Beso, which still runs here in Hollywood, the nightclub section closed off in February 2013 while SHe was plagued by demerits from the DOH this past April.

AROUND TOWN—NYC based chef David Burke, who already has David in the Box at MacCarron airport, is considering anywhere from three to five restaurants in Vegas in the next couple of years.

PALMS RESORT—Tony Hu, who has a number of Chinese eateries in Chicago, is opening an expansion in the Palms Resort in the former Little Buddha called Lao You Ju.

THE STRIP—Victor Drai, nightlife impresario who also has a spot in Hollywood, debuted his new beach and nightclub at The Cromwell, also the site of Giada De Laurentiis's new restaurant. The beach club runs Fridays to Sundays and the nightclub rocks from Thursday to Saturday.
· All Las Vegas Coverage [~ELA~]