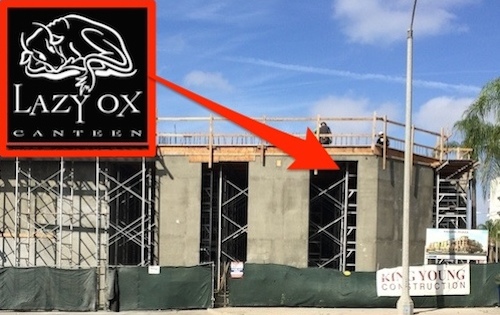 1) Alhambra: Lazy Ox Canteen, Downtown's New American gastropub that has served as a revolving door for up-and-coming chefs, is coming to San Gabriel Valley. This marks the very first Eastwardly migration of the new generation of DTLA restaurants. Since Alhambra Pacific Plaza, the site of Lazy Ox 2, won't be completed until end of 2014, it is safe to assume the SGV branch won't open until 2015.
Update: While lease negotiations aren't finalized, the concept going in will not be a Lazy Ox Canteen. 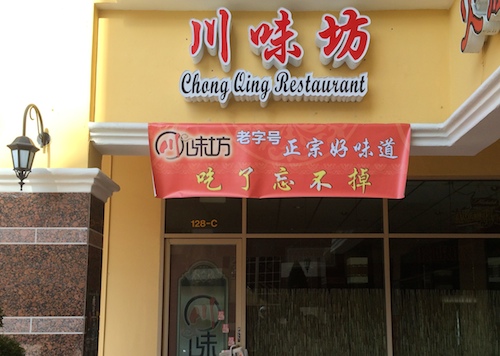 2) San Gabriel: Chong Qing Restaurant has taken over Liang's Kitchen. Chong Qing started as Oriental Pearl Restaurant over 10 years ago on Main Street, then moved over to the location where Liang's Kitchen resided, then moved again to the current location of JZ Restaurant in San Gabriel. In 2007, Oriental Pearl uprooted itself to Las Vegas and opened as J&J Sichuan. Last month, Chong Qing opened as the second (or is it actually third?) iteration of Orient Pearl in the exact same location where it once occupied. Manager Ray Chen says the original chef is back in Los Angeles and serving the now-more-popular-than-ever Sichuanese food. 227 W Valley Blvd

3) San Gabriel: The Nha Trang empire is on a tear. The fourth branch of Nha Trang is even bigger and grander than any of the previous Nha Trangs, with a larger menu to match. 120 N San Gabriel Blvd 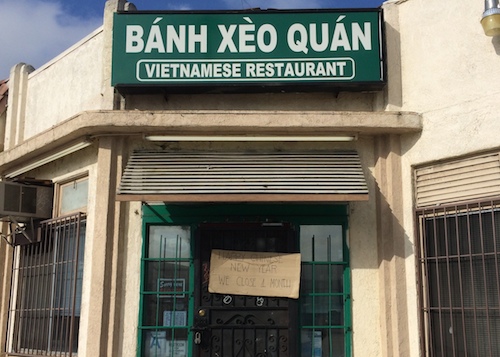 4) Rosemead: Banh Xeo Quan has closed its doors. The (only) house of Vietnamese crepes quietly carried on for years in a barely-converted taqueria, and they announced a month long vacation prior to Chinese New Year. Chinese New Year was January 31 and Banh Xeo Quan has yet to re-open. This smells of Yazmin all over again. 8742 E Garvey Ave
· All San Gabriel Valley Coverage [~ELA~]