On The Scene at Jon Favreau's Chef Premiere Last Night

Share All sharing options for: On The Scene at Jon Favreau's Chef Premiere Last Night

Editor markup for LA Chef Screening. This is only visible in the story editor.

There was no red carpet at the Directors Guild of America last night when the who's who of LA's restaurant world converged to celebrate Chef, a film by writer and director Jon Favreau. Opening on May 9, Chef tells the story of a chef (played by Jon Favreau) who quits his job in a restaurant to start a food truck. The film has garnered wide acclaim among food professionals; even Anthony Bourdain liked it.

One of the reasons chefs seem to like the film is that Kogi creator and chef Roy Choi consulted on every kitchen scene, every food porn-worthy shot — and turned what can sometimes look like fakery into an authentic representation of the inside of a restaurant kitchen. Here's what Choi's friends and fans had to say after the screening.

· Just as the film began to start, pastry chef Duff Goldman was heard bemoaning the lack of movie snacks. "There are 300 chefs in this room and no one brought popcorn?!" he asked, incredulous. His take on the movie? "I loved it. They really captured the small things about being a chef that makes the job challenging without... you know, the truck doesn't explode, the kid doesn't get cancer. It was a really good snapshot of a guy who, you know, makes lemonade."

· With a few exceptions, the movie was shot on location in LA. The scenes inside the restaurant kitchen and dining room take place at Hatfield's.

· In one five-minute scene, Favreau's character takes his son to a kitchen supply store to shop for new equipment. They go to Charlie's Fixtures and buy panini presses from Charlie himself — the store's gaunt, shrewd, and notoriously irascible owner with whom many a chef in town has done business. In fact, here's a shot of Favreau and Choi at Charlie's Fixtures.

· When asked if he'd been to Charlie's Fixtures, Salt Air's chef Greg Daniels — who was previously a chef at Perry St. in New York — guffawed. "Of course! Who hasn't been there?"

· This here website, Eater LA, makes an appearance. Do be sure to look out for it.

Chef cake thanks to the Ace of Cakes! https://t.co/otkMlhrzVn

· While a cameraman was asking Duff Goldman and Jon Favreau to pose for a shot, a mother asked her daughter, "Do you know who that is?" The daughter responded gleefully with a hint of annoyance, "Mom. You know how we we go to Duff's Cake Mix? That's Duff! From the show!" In fact, all of the kids in the audience wanted to get their photo taken with Duff, a fact Favreau didn't seem to mind.

· Chef Jet Tila on the film: "It was fun. It reflected the chef experience well, but was never weighed down by industry rhetoric. And I really admired the bits of honest barbs towards some that wield the pen, and yet have never held a knife."

· When asked for his thoughts on the film, Zach Brooks, editor of Midtown Lunch, said: "As somebody who was born in Miami, got married in New Orleans, lives in L.A., is really into music, has eaten at my fair share of food trucks, and has a son — who just ate his first beignet three weeks ago! — I'd say there was a little bit for me to love about this movie. Also, how do I get AOL to buy my blog for millions of dollars so I can spend the rest of my life investing in restaurants run by chefs whose food I love?"

· Caryl Chinn, formerly of Bon Appetit and current VP of Culinary Events at Octagon: "I really appreciate all [Jon Favreau] did to make the film authentic. How seriously he trained with Roy, the research that went into selecting the chocolate molten lava cake as the symbol of a kitchen who no longer cared, etc, etc. I think that all shines through... and the food stands up to scrutiny."

· Josh Lurie, of Food GPS, said: "What I enjoyed about it was that it was just as much about family as it was about food. Ultimately, there wasn't a whole lot of conflict, but I laughed throughout the movie, never got bored, and left smiling. Now when can I get an Austin Midnight sandwich?"

· Chef Chad Colby (Chi Spacca) made an appearance at the screening and earned a credit in the film for additional consulting work. See: when Favreau's character butchers a pig. Fun fact: Colby served as the hand double for actor John Leguizamo's character. "Leguizamo's hand make-up had to match the burn marks on my hands." Colby's favorite part of the film? "They did a good job with the kitchen banter." 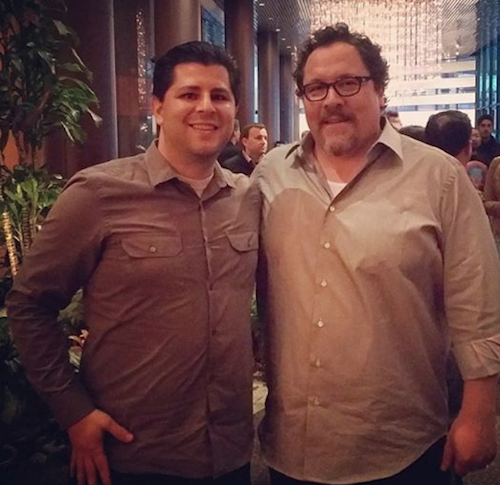 · Favreau, when asked if he still makes any of the dishes Choi taught him how to prepare, said he "always goes back to that steak. It always comes out juicy and flavorful. And the dessert with the berries and caramel. So, so good."

· There were two food trucks at the lobby after-party: Kogi and Urban Oven, a pizza truck. When Roy Choi walked up to the window of the pizza truck, looking hungry, he said to the lady taking orders, "Oh, hey, uh, I work with the other truck...? Could I maybe get a slice?" And she said, "Do you have your food ticket? No ticket, no pizza."