Share All sharing options for: Jon Favreau on How Roy Choi Shaped Chef

Jon Favreau's new film Chef, which premieres tonight, is a lush, loving tribute to food. Even with co-stars Sofia Vergara, Scarlett Johansson and Robert Downey, Jr. it's the food that truly stands out. For Favreau – who wrote, directed and starred in the indie flick – a lot of the credit goes to LA food truck pioneer Roy Choi.

The actor/director goes on: "I went with him in his car to every one of his restaurants – like a ride-along if you're doing a cop movie," said Favreau. "He explained to me everything he was doing and seeing. He would try the meat; I would try the meat. He would taste a dish; I would taste a dish. At the end of day I couldn't move from eating all the food." More importantly, said Favreau, they decided to work together.

"Roy said 'I'll do it but you have to get the kitchen right. Movies always get it wrong. I'll do everything you need. I'll train you, do the menus, look over your scripts, help you in the editing room. Whatever you want. But you have to promise you'll get the details right.' I said that's all I ever want to do. That's the way I work. That's exactly what I had in mind as well."

Chef follows Carl Casper (Favreau) after he loses his job at a restaurant and tries to rediscover his passion for cooking by starting up a food truck. To get comfortable in the kitchen, Choi sent Favreau to a French culinary school and then had him train in several of Choi's kitchens.

"Eventually after a real slow tedious process of prep," said Favreau, Choi "just jammed me on the line during a service. They just throw you in the water. It's like pushing you out of the nest. And you slowly learn from other people on the line and as they figure out how much you can take they're happy to have another set of hands. And I was a good set of hands they could trust. That's when Roy said everything shifted for him and he knew I was going to be ready."

The first scenes in Chef are set in a fictional restaurant owned by Dustin Hoffman. Those scenes were shot in LA's Hatfield's on Melrose. "Don't confuse the location with the restaurant in the movie; cinematically it was wonderful. When you build a restaurant on a stage for a Hollywood film it looks so perfect. This one had a beauty to it and was very well laid out. I loved how the front and back of the house you could see the open kitchen – you could see in – that was fun for the cameraman. Kitchens aren't usually aesthetically pleasing places in reality; they're generally hot and crowded. The visual aspect of it isn't a priority. This one is." 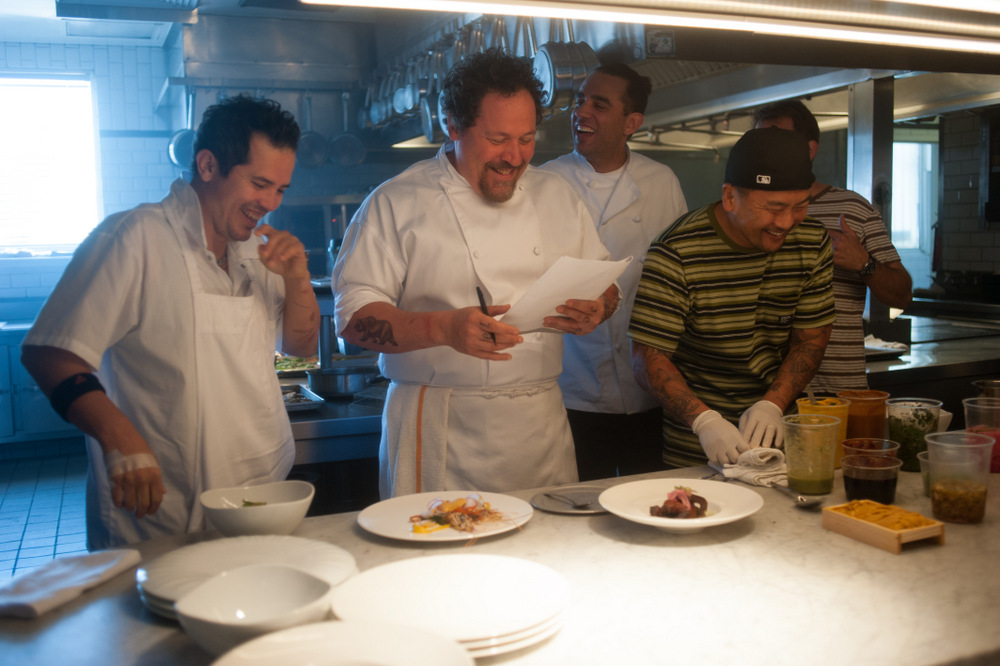 Another critical scene in Chef is a massive food truck roundup shot on Abbot Kinney in Venice on a First Friday: "It was an important spot for Roy," said Favreau. "Because that's where his Kogi truck first started and that was the epicenter.

Making the movie has changed the way Favreau looks at food. He's in the midst of a major remodel of his own kitchen. He says he's adding a wok ring and a pizza oven and going all-stainless with open shelving.

"But even what they call a commercial kitchen at home is very different from what a chef calls a kitchen. Chefs want everything open. They want to see everything. They want to use their space efficiently. Everything is geared around cooking and cleaning and keeping things in order and so you maximize that.

"It's different than what families want in their kitchen – kitchens are really extensions – they are the new living room – they get cozy and comfortable and are geared towards television and sitting around and eating. It's a family space and that's not what a chef wants – a chef wants a lot of pots and pans and cutting boards and towels and ingredients."

More important than the kitchen is the approach to food. Favreau remembers the first thing Roy Choi said to him: 'When a chef sees a bag of shallots he gets excited because they know they're going to get to peel them all.'

"And I was like ok is that some sort of metaphor for something else or are you making a point? He literally meant it. By the way I really enjoy doing an afternoon of prep especially with my kids, its arts and crafts for them. I love shopping for garlic and taking the germ out and fine slicing and preparing all the ingredients you're going to cook with later.

"That's the gift of what I learned – there's a meditative practice that comes with this very simple work that done well and consistently will make for a great dish. But also a great experience making it."
— Andrew Epstein
· All Chef Coverage [~ELA~]