Surfside seafood shacks are nothing new in Venice, but Abbot Kinney "beach bistro" Salt Air has done much to reinvent the notion. One of a handful of Westside David Reiss joints that include The Brig, A-Frame and Sunny Spot, Salt Air's clean white-on-white landscape is refreshing and simple, with most of the color coming from the menu. That's where you'll find the cooking of Greg A. Daniels — a former New York chef with a resume that includes Perry St. — turning out popular dishes like bright green pea toast and mussels served in a coconut curry. Eater chatted with Reiss and Daniels about what it means to make it through the first year of business, how Abbot Kinney continues to change and what it means to stick to the menu that you wanted all along.

David, it seems like you really have a penchant for helping chefs to spread their wings in their own environment, without losing your own touch. Was that the case with Salt Air?
David: I try to do that everywhere I work. I just want to give them support and let them express themselves. 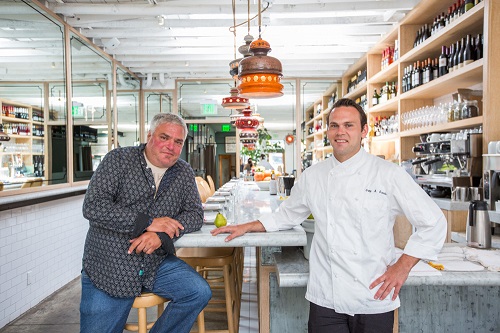 Greg, obviously you already had some seafood leanings at Perry St. in New York. What made you want to expand on the theme out here?
Greg: Well, Perry St.'s menu was about 50-50 seafood, so I got lots of experience in my years out of there. But when this project came up and I met with Dave, I didn't necessarily know the concept. When I heard it , it seemed like something I could really wrap my head around, that made sense, and the location was great. Put a seafood restaurant in Venice, with a kind of bistro feel, not fine dining, just high end cuisine. I was excited about the project, and we went from there.

So how have you adjusted to the produce and seafood on this coast?
Greg: I moved out not long before signing on to the project, so I hadn't gotten fully immersed in what California food is all about; I learned as I went. Of course, it turned out great, the produce is amazing. In New York, nine months out of the year we're getting stuff from California anyway, so to be able to get it five days sooner and fresher, to be able to react to the market immediately is huge. In terms of the difference between here and New York specifically, A: the ingredients are better, B: it's just a different face and feel, a kind of vibe. Not better or worse, it just takes some getting used to.

It seems like you're adjusting to the Westside well.
Greg: I moved out with my girlfriend when she took a job out here, it seemed like a good time to make a change. I didn't know, so we initially moved to West Hollywood, and it wasn't until Salt Air opened a few months after that we fell in love with the Westside, Venice specifically. We found a place and it's been amazing, we love living over here.

David: I started out in a restaurant on Fairfax and Beverly. It took a while to make the move west. The only reason I landed that way was I opened a night club in Santa Monica and just got a Westside taste. Then I opened The Brig, which led to everything else. And you see how crazy Abbot Kinney is now.

Yeah, Abbot Kinney is loaded with dining options. One year in, do you feel like you've found your footing as a neighborhood spot for the locals, or do you still mostly find people who have driven in?
David: A little of both. We have regulars, the people who have found us and like us and keep coming back. We don't have the bar scene that the Tasting Kitchen has, we don't have the Mediterranean angle that Gjelina has. We have our, I guess mocktails that Brian (Butler) does, and our great wine program. Everything's really fallen into place.

So who is your average customer these days?
David: Westside residents. I hate to say affluent, we aren't overly expensive, but someone with discerning taste, that knows what they want. We don't focus on drinking as much. There's a lot of repeat customers. Being in Venice, it's all over the place.

Greg: I'll say pretty much the same thing. Our waiters are the window into our clientele. What I get from them is that it's 50-50 repeat customers, and others where it's their first time dining with us. I think that's a great mix. We haven't been open forever, but we're still getting new people every day. Hopefully we continue to do what we do well, and word of mouth spreads, it keeps the new pople coming in. At the same time, it's important to take care of the regulars. One thing about Venice is it's spread out — the super rich, surf shacks, we hit all those people. 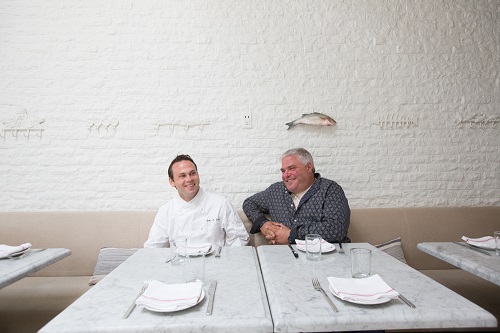 What changes, if any, did you make a month in? What about six months in?
David: None from my point of view, really.

Greg: We're pretty close to the original concept. We sweep the menu here and there after hearing from our regulars and other clientele. The direction is the same, just scaled up slightly to fit in on the street and in the neighborhood. When we opened, we were doing fish and chips, steak frites. We still do fish and chips at lunch, but dinner is skewed more composed. All in all, the concept was the right one for our space and design.

What do you think are the most quintessential items on the menu?
David: The pea toast, or mushroom toast in winter. It's far and away our attention grabber, both taste and visually.

Greg: I didn't know they were going to be top sellers. The pea toast has been done before, it's not something completely new. We did our riff on it, and people gravitate towards it. The staff loves it, so they sell it. The other one is our dessert menu, which has a huge following for the monkey bread. I went back and forth on it. It's simple but not a lot of people know what it is, but low behold we put it on the menu and now it outsells all the other desserts five to one. I wanted to keep two whole fish on menu, which I don't want to get rid of any time soon. The rest keeps in mind seasonality and going to the market and seeing what's out there and how if fits into what we're doing.

Is there anything you still wish you could do with Salt Air?
David: We're too small to warrant a liquor license, though we get asked all the time. But we're happy with the amount of wine and beer we do. I think we built with everything we wanted.

Greg: I attribute it to Dave, his philosophy on restaurants and chefs, but I'm given a lot of freedom. I can express myself with the menu, and there's always something new and fresh and changing. There aren't any goals we haven't achieved, it's just a matter of doing what we're doing now. I'm really happy with how things have gone. —Farley Elliott
· All Salt Air Coverage [~ELA~]
· All One Year In Coverage [~ELA~]