Share All sharing options for: Justin Pike on How Chalkboards Make Drinking Easier 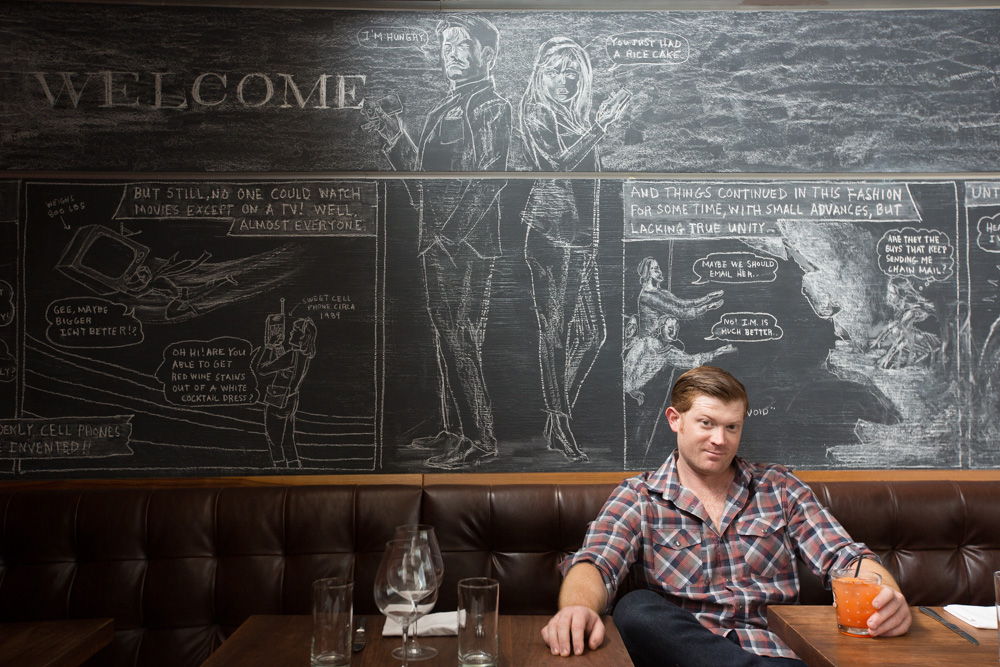 Justin Pike started making his mark as a bartender in Portland before coming down to L.A. with The Tasting Kitchen's chef, Casey Lane. After a few years of establishing himself in Venice, Pike's cocktail program has quietly become regarded as one of the best in town, not because of anything flashy or even market driven, but because of a keen eye toward flavor and customer service. Here now, Pike talks about his background in art and how that informs his time at the bar at The Tasting Kitchen.

Why did you start bartending? I started because I went to art school and needed a job. I got what I want out of school and came back after studying abroad. I'd never really worked in restaurants but started at a cocktail place. I guess what got me was the history part, all the stuff that people had forgotten about making drinks in America. Then it became a fun way of life. I love hanging out with people, making drinks, making jokes. I love the energy and it started as a secondary thing to make money.

I often think to myself, if I only did art, would I miss tending bar? I'd probably keep working one shift a week. It's almost addictive, the energy that goes into making drinks. I see a lot of people that run bars that move into overseeing programs, almost like a manager. You see a lot of that in L.A., a cocktail menu designed by somebody, but they're not really there. That's great that they can do it and be successful. I wouldn't be as interested if I didn't work at the bar. 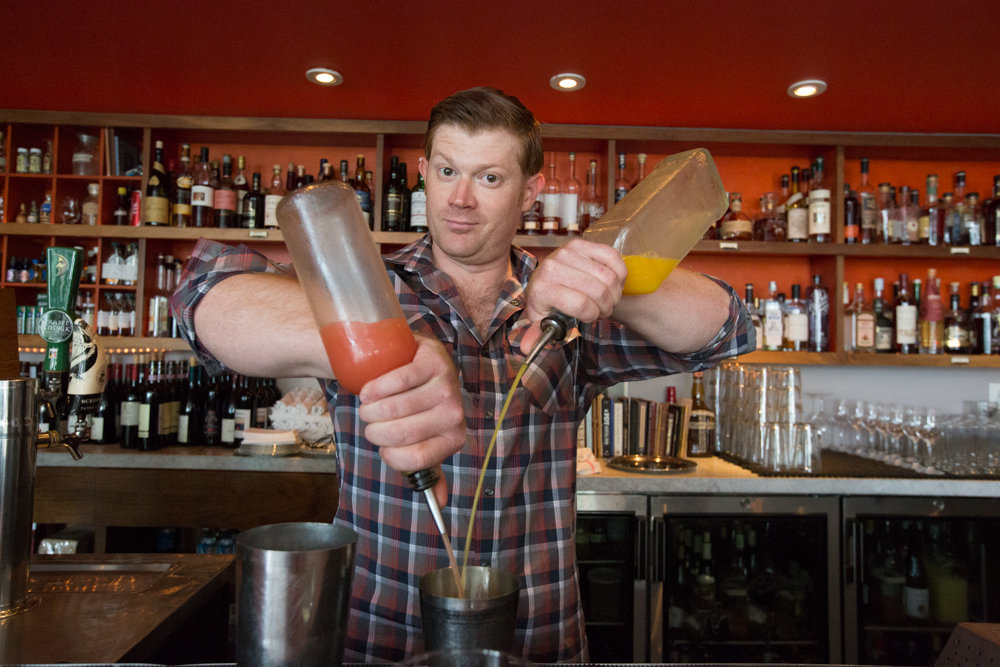 If someone comes in and orders a drink at The Tasting Kitchen, what do you start them on? People ask those questions a lot. I'd need to get more information because there's such a broad range. I'd ask if they want to do something shaken or stirred. I worked in retail in my early 20s. It wasn't for me, but the management had this whole spiel they wanted us to do, that instead of cherry picking, you funnel into what a person wants.

So you would recommend...? A lot of people have drinks they enjoy, but I try not to instill things that I like. I like daiquiris, manhattans, and tiki drinks. I'm going to order them even if they're too sweet. A well-shaken daiquiri is the thing I order the most. With Manhattans, a nice solid bold rye Manhattan. Those are what I like. So I guess to answer your question, I would get a drink that matches my personality, like the Moped on the Freeway.

A lot of bartenders tell me that my drinks have a ton of bitters, but also tons of sweetness. I always enjoy the challenge of that, when I add bitters to a tiki drink. We have this one think with pineapple, gin, this weird hopped meade that has an underlying lemon almond thing. It's soft and fluid. It goes in one direction and changes at the end of the drink. Those are the kind of drinks I find really interesting, like it changes everything, sort of like a moped on the freeway.

What's up with the chalkboards near the bar and upstairs? I did not intend to do them. Of course, I do art and I love doing it, but when I came here, it was more out of necessity than anything. I wanted people to know that we were doing cool drinks because back then it was hard to get a good cocktail and good food at the same place. I started putting things on the board, our menu, old drawings from early 1900s cocktail books. It just sort of morphed into this thing where I started people I knew up there.

It was a a fun way to make the drinks playful, like tease what we do or what LA or Venice is. We had one where two guys are talking and one's like: "what's your name?" And he says, "my name is Maxe, but you pronounce it MAY-SHAY." It's fun way to make jokes about stuff and pop culture. I'm really lucky that the owner let me do it. I also wrote one time, "Have you noticed the word epic is overused lately? Epic is the new awesome."

How does that affect what you do here? For the last couple of years we've had the same staff. And I think we try to do the best we can, be consistent, do all the right shaking, etc. But in then end, my spiel is always, it's all about people hanging out and having a good time. Because eventually this craze about cocktail is going to be over. It's not going to end, it'll just be more normal. So then, we'll think, where do I want to go for drinks?

I still love going to dive bars and my favorite place is in Portland at this place that doesn't even make good cocktails. But the bartenders were super funny and introduced me to everybody. I had just broken up and I wanted to go somewhere to hang out. I think that people can look at the wall and say, that's funny. It's a way for people to feel like they're in a bar where you can talk to other people. That's the fun part of tending to the bar - tending to people and making sure they're having a good time and interacting.

Do you do it because the bar is on Abbot Kinney, in particular? Venice has always had that flavor in that there's a little bit of absurdity to it. When I first moved here, I would explain it to people say that the sun has sunburned peoples' brains a little. Just pulled out a little of the sanity. You see guys with huge muscles with bikinis and roller blades. So much of LA culture is based on the flavor of the month or year, but when it comes down to it, you're going to stick around if you're nice and make people feel comfortable.

And not just locals, but people who come up from OC and have their big night out. The Tasting Kitchen is this super hip place on Abbot Kinney and sometimes they ask for Grey Goose whatever. The first year we were here, we just said: we don't have this or that. Now I've realized: why make people feel silly. They don't know. They just want to feel cool. So then I thought, I've got you. A lot of times those people are thinking, who's this asshole that made me feel stupid. They've been bombarded by Grey Goose ads and have been told that it's good.

So what drives you on a nightly basis because it can still get tedious. I was here last night and I wasn't really having a ton of fun, to be honest. There are people you don't like and put up with them. You're trying to make sure everything's taken care of even if you're best buddies. I just try to be as perfect as I can, whether it's bartending or painting or music. I play piano and sometimes I just sit down and try to read the music.

It comes down to awareness, being conscious and using all your senses. You're aware of making drinks and the person next to you bartending.You have to make a list of things in your head that you have to do next and how you're going to handle it. It's like a huge puzzle. I think that's the part of bartending to me that's like art - the awareness, just being conscious, being there, breathing, looking around, paying attention. 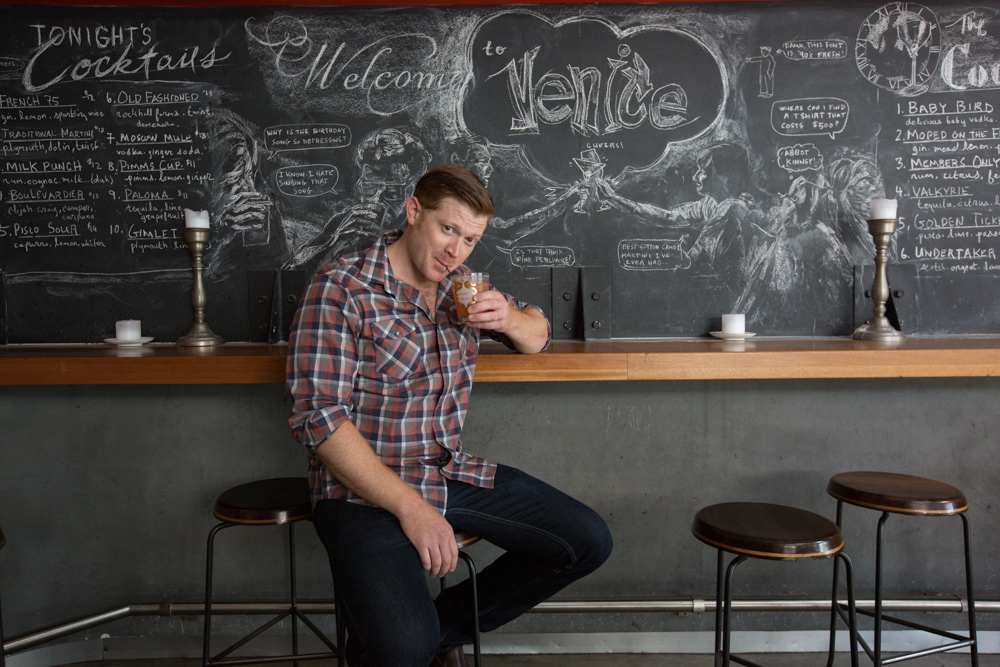 · All The Barkeepers Coverage [~ELA~]