Ben Aviram on Landing a Tough Table at Maude

Share All sharing options for: Ben Aviram on Landing a Tough Table at Maude 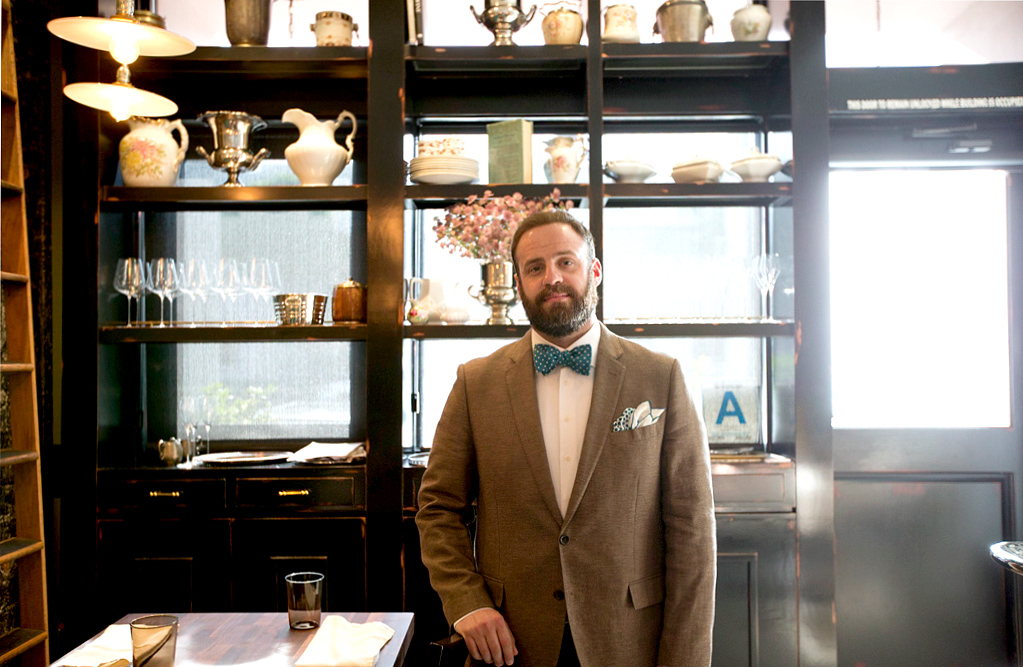 Ben Aviram, a Pasadena native, spent some time in some of the country's more storied restaurants from The French Laundry to Alinea in Chicago. When Curtis Stone was opening his first solo restaurant venture in Maude in the heart of Beverly Hills, he signed on Aviram to helm the front of the house and wine program. Since then, Maude has become one of, if not the most, difficult tables to land in the city. Here now, Eater sits down with Aviram on how best to land a rare reservation at the 25-seat Maude.

How many bookings do you make a month? We do about 50 covers a night on average and we can seat 24-26 people at any given point depending on the configuration. We open reservations on the first Tuesday of the month for the next month. The reservations get filled pretty fast. When we first opened, it wasn't as crazy, but now the phones are running non stop.

Why didn't you do the ticket model that Nick Kokonas at Alinea founded? It was about timing. Nick wasn't ready to go with the system for other restaurants when we opened. Now we're kind of looking at a cost-benefit analysis. We're lucky to be in this business and have the good fortune of getting booked up. We're still considering whether or not selling tickets makes sense for us.

Do you think the ticket model affects the bottom line? It doesn't necessarily affect the gross, but it does affect cash flow. For example, when you sell a whole season, in 15 seconds you get four months of revenue into the bank account. For us, it's night by night as people come and pay one night at a time. You certainly have other benefits, such as cancellations. The tickets take care of no-shows. We have a pretty stringent 48 hour cancellation policy of $100 per person. And we can get people to fill in the demand because we might call people that live a few blocks away and ask if they want to come in.

So if I want a table for two on a Saturday night at 8 p.m., how do I get it? The best thing to do is to call us on the first of the month when the phone lines open up. We got a tweet from someone saying they redialed 500 times and kept calling for three and a half hours to get a reservation. We just don't have the manpower as we have four lines and two people. If you call in that first day, you'll likely get that table.

Has anyone tried slipping you a $100 for a table? This is Beverly Hills. They have, but to no avail. We have 8 parties coming in tonight and only 8 tables. We just don't have the flexibility. A normal restaurant could fudge things, slip something in. Someone would wait two hours. If we had 20 tables like at Alinea, maybe.

What's going on with the latest tasting menu? Right now we're in the middle of peas. We have a braised lamb neck that's killer. The rabbit pie is one of the snacks that start the menu.

What percentage of the diners are getting the full wine pairings? It fluctuates but some times it's really quiet and other night it feels like the whole dining room is doing wine pairings. But at least half the people do pairings on any given night.

How would you say Maude is trying to fit into the L.A. food scene? It's really interesting right now. It's at the tipping point where there's more and more quality food, and less of the pursuit of a scene that's often criticized. It's had a really strong ethnic food scene, but now there's sort of that New American, slightly elevated dining that's coming onto the scene. Maude is trying to make more than statement for the L.A. scene. It wants to be a nationally or internationally known restaurant.

Like a 50 Best Restaurant-type of place? The environment isn't as formal as that. Curtis wanted it to be at a more accessible price point. Prices will fluctuate. The morels month will be more expensive. The truffle month at the end of the year, that's going to be more expensive.

What's next? People joke about us expanding the space. For the near term, we're very happy with what we have and we want to continue to improve on what we're doing. The background that I come from, I think this service is amongst the best in L.A., but there's still room to grow and fine tune. We can be one of those places where the service is flawless. And the kitchen still has things to show with the menu changing every month. Nothing about the menu stays the same every month.

Do you think people want that level of service, something like a three Michelin star-type place? I think it's a challenge with the small space and the limited staff. There was this great article in Grubstreet about Eleven Madison Park. They have an army pull it off in a smaller environment, but you don't need all the pomp and circumstance. People are moving away from that. They don't want the pretension or formal environment. You can still cover the bases and have flawless service. You want to feel looked after, like you're in someone's home. The question is, can you do all that without the formality of the more traditional paradigm like Alinea and Eleven Madison Park. It's casual here: servers wear aprons and jeans. We don't have tableclothes. But we have that attention to detail and really make guests feel looked after.
· All The Gatekeepers Coverage [~ELA~]