Share All sharing options for: Harlowe's Chris Amirault on Going Beyond Mustaches

Photos by Frank Lee
Chris Amirault has been around a bar or two. The East Coast transplant has been pouring bottles for years now, first at the opening team with Mess Hall in Los Feliz, and more recently at The Eveleigh. Between stints at the popular West Hollywood drink spot, Amirault pulled one-night stands at La Descarga, Pour Vous and elsewhere.

But when the 1933 Group (of Bigfoot West, Sassafras, La Cuevita and Thirsty Crow fame) called about helping to open a new, cocktail-forward bar in the old Crown Bar space on Santa Monica Blvd., Amirault jumped at the chance to stay in his neighborhood and focus on the craft cocktails he loves. Eater caught up with the Harlowe bartender to discuss the lack of speed in many craft cocktail bars, Eric Greenspan's meaty food and just how many hours behind the scenes it takes to whip up a batch of bottled Sazeracs.

There are a lot of great craft cocktail bars in Los Angeles. What's going on at Harlowe that maybe you can't get anywhere else? You have a lot of history in the area. You have Jones, you have Formosa, but not a lot of focus on craft cocktails. For us, we're trying to increase the quality. Introduce craft cocktails that are so prevalent in Hollywood, so prevalent on the Eastside, and show people that there really are alternatives to your Jack and Coke, or your vodka soda. So that's kind of where the whole draft program came from.

There's also a big stigma as far as — you go to some of the best craft cocktails in the world, but you wait about 20-25 minutes for a cocktail. The bartender finally sees you, then it takes ten minutes just to make the drink. We wanted to attack that idea. I mean, for a novice, whose basic cocktail knowledge is a Moscow Mule or an Old Fashioned, and who wants seven of them at once? Great. It'll take us a minute and a half because it's all on draft.

Which also means pre-bottled cocktails. Yeah. So in addition to having the draft cocktails, we do pre-bottled and pre-diluted cocktails. Obviously speed is one of the most attractive elements of that. We've actually decided, through trial and error, how much one dash of bitters weighs in the cocktail. So everything is completely measured, including the water, and the amount of dilution that goes into the cocktail is consistent. Not only are we speeding up service, we're also maintaining consistency.

You do a wide array of aperitifs too, which isn't something seen much in Los Angeles, right? So Dushan Zaric, from Employees Only and Macao Trading Company in New York, was the consultant for Harlowe. And one of the cool things that they normally do in New York is have an apertivo menu, things like that, that are really driven before you eat, and then having a list of cocktails that follow that sort of stand on their own more. With our aromatic cocktails, you'll see there are more traditional drinks.

It sounds like there's a lot being made in house. We're blessed with a full kitchen back there. And since we're a bar first, that's sort of our kitchen, even though we do serve food. So we have a very big prep space, and it would seriously be a waste of real estate if we didn't take that necessary prep time to go and at least do all our syrups in house.

So what's it like to pair drinks with Eric Greenspan's notoriously hearty food? It's funny — we created the cocktail menu first, and Eric, because he's so talented, was able to kind of weave what he was doing creatively within the concept of the bar. What we wanted to do was provide a little bit of food so that, if it's a Friday or Saturday night, instead of having to leave to go to another place, you can have enough little bar bites to keep you going here. So the open-faced bologna sandwich is something slightly savory, a little greasy, but also the presentation is slightly elevated. We wanted to do elevated tavern food that you could eat without having to feel like you're sitting down and going to dinner.

What do you think the bar will grow into over the next year? Our dining group has a lot of great, rustic, whiskey and beer bars. What we wanted to do was use softer, delicate, more botanically-based spirits, like light rums, piscos, gins. So as we move into the fall, we want to challenge ourselves to still do seasonal menus. But we also want to show that it's totally possible to keep doing craft cocktails at high volume. Especially in Los Angeles, where you have great bars like The Varnish, Seven Grand. We want to show that it's possible to get that same level of cocktail, but you can wait 35 seconds instead.

There's not necessarily a lack of artistry just because we aren't reaching for seven bottles for one cocktail. It's a conscious choice, where we know saving 30 seconds to a minute for the guest seems like an eternity for them, even though we're going be putting four to six more hours of work into the prep.

We really just want to show that craft cocktails doesn't have to mean somebody in a vest and curly mustache that takes fifteen minutes to find organic rainwater, locally sourced from three months ago, to make a great cocktail. It just takes somebody who's passionate about it. And if we're putting in four extra hours of prep, don't worry that the drink itself only takes ten seconds to make. —Farley Elliott 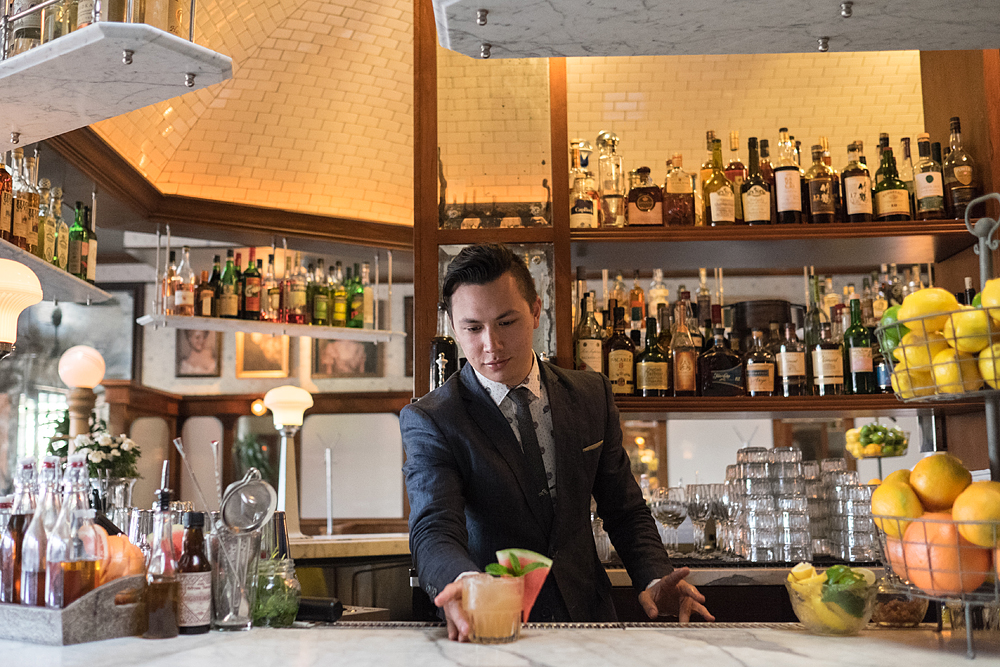 ·All The Barkeepers Coverage [~ELA~]