Kyle Glanville of G&B Coffee and Go Get Em Tiger

Share All sharing options for: Kyle Glanville of G&B Coffee and Go Get Em Tiger

Welcome to The Baristas, a regular feature that chronicles the daily lives of some of the most talented ladies and gentlemen in LA who are passionate about serving coffee. 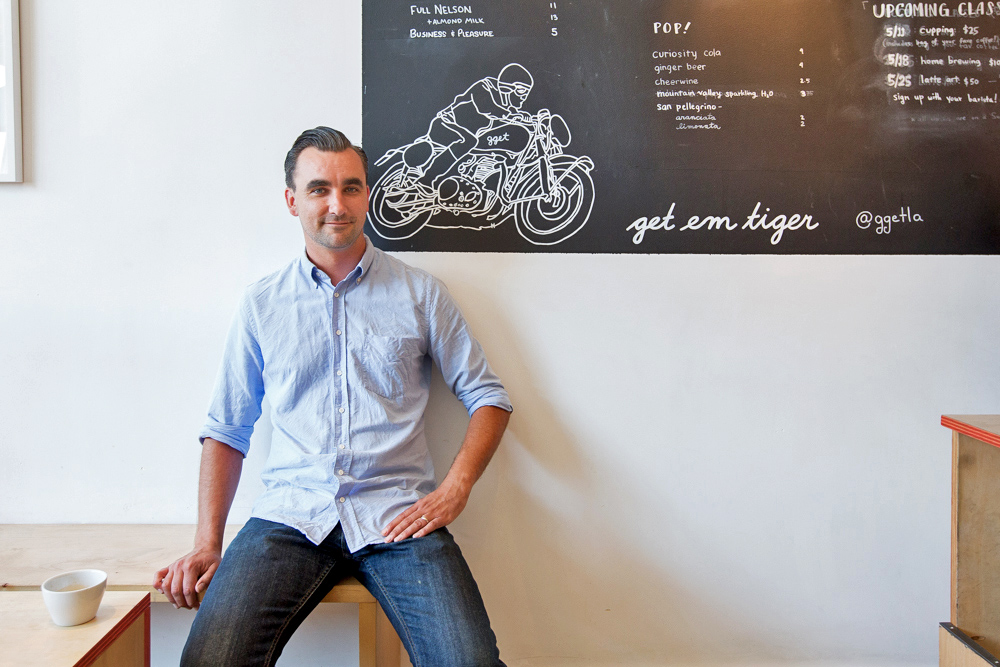 Kyle Glanville started out in the world of coffee just after high school while studying theater in Seattle. Since then, he's gone on to build up the Intelligentsia empire in L.A. and eventually founded two of the most compelling coffee bars in the city with partner Charles Babinski: G&B Coffee at Grand Central Market and Go Get Em Tiger in Larchmont. Here now, Eater chats with Glanville about the development of the specialty coffee scene in L.A,, things he finds commendable, and things that bother him about the industry.

How did you get into coffee? Actually it's the only occupation I've held in my adult life. I started in high school at a shop in Carmel, close to where I grew up, serving pretty bad coffee. I was turned on by customer service element, establishing relationships with people and seeing the growth of the community. After high school, I went to Seattle to study theater. I first went to Espresso Vivace and ordered my regular drink: an 8 ounce vanilla latte. It was unlike anything I'd had up to that point. I could not understand why that coffee tasted the way it did.

I started to look more into it: Vivace was this legendary spot at the time. I was pretty poor, paying my way through school and looking for a job. The market for part time jobs for full time acting students wasn't particularly robust, what with rehearsals and performances. I populated the city with my resume, looking for anything, even fast food. I wandered into this cafe called Victrola Coffee and I was intimidated because it was so hip. They hired me for part time night work.

At the time, they were using Vivace espresso and taking things more seriously than anything I'd experienced. This work intrigued me so much that over time my obsession overtook my love for theater. I dropped out and went full time, and I got to work trying to answer all the questions that I had about why this coffee was so good. 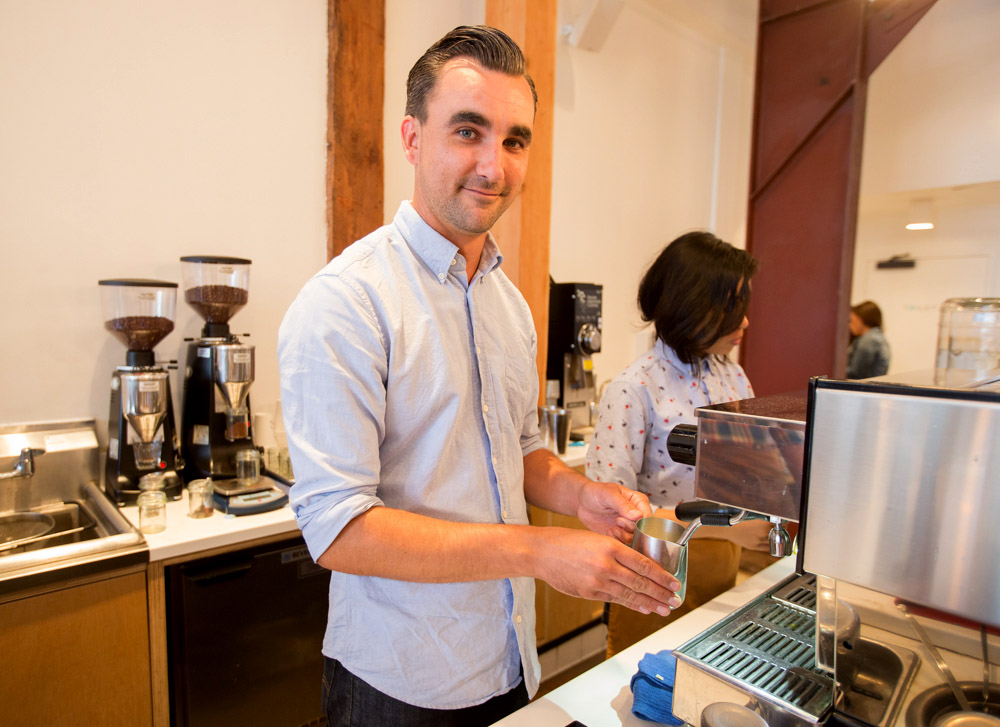 What do you think about the current scene in L.A.? That it exists. I don't care what anybody says and I'm sure the comments will punish me, but there wasn't good coffee in L.A. before Intelligentsia opened. There was stuff, and people were trying. It might've come about without Intelligentsia. But I think Intelligentsia Silver Lake was the most ambitious shop in the city, not just for the pursuit of quality, but on many different fronts. That was the birth of the coffee scene as we know it, the progressive scene at least.

I would say that L.A. has the best coffee bars in the world, without question. But it's not like all the bars are good. The general level for what people will accept has gone up. You can find a reasonable coffee in most corners of the city right now, which I think is a success. But the really great coffee bars are still very limited.

What do you feel like you've been trying to achieve with G&B and Go Get Em Tiger? The normal person, for somebody who's not initiated into this strange Third Wave universe. And for us, I would never say that we're after some fine niche of customers. I think that even some really nice coffee is priced really accessibly, and I think that accessibility challenges have to do with service more than anything and how shops frame their menu. We've tried to take a hard look at how we create a place that represents our values and reconcile them with the general public. How do we meet people where they are and drag them into our world? It's a world of better coffee and we believe that there's a way to do that without alienating them or making them feel bad about what they like.

It takes a creative style of service and how we talk to customers. We've basically mandated staff wide that we don't initiated any "education moments" withour customers. It's pretty hard to try and education somebody on something they've enjoyed every day without them feeling condescended to. We just try to serve them something that's wonderful and do it in a way that's kind. We have a real customer service doctrine and approach that brings people in. We don't offer a lot of different kinds of milks or drinks, but we serve things that appeal broadly and serve it in a way that appeals to everybody.

What's your favorite drink to make? For me, there are certain people that care what they drink, but if people have no idea what they want, a housemade almond-macadamia nut milk cappuccino. It's got sweetness. It's nutty. It's unique. It's very clearly high quality and it works so well. So when someone comes in and they have no idea what they want, I'll ask if they'd be willing to try the Business and Pleasure. You get sparkling iced tea to start. Then a single shot of espresso. Then you get a lightly sweetened, shaken cold almond milk cappuccino. That sort of gives people a nice wide picture of the things that we do. I'm still amazed at how many people have never had, or don't like, espresso. But they like ours by itself. The "pleasure" part, the almost capp is just really refreshing and delicious.

G&B or Go Get Em Tiger. Which one would you replicate? They're very different. G&B is our name. Glanville and Babinski. It's easier. I think that G&B, we'll keep that tight. Another one or two, but GGET is definitely the concept and idea and style that when we were making, we wanted to put in a number of other places. We wanted to create some distance to personal brands and let it just be a company that stands on its own. The majority of people that go into G&B have no idea who Charles and I are, and taht's great. GGET is something that we want to grow and employ lots of people and be relevant and create jobs. That excites me.

What are a few things that you don't like in L.A. right now? I don't like to see this in any scene: companies and people who kind of run before they ever learn to walk. There are lot of experts and coffee bar owners and baristas who don't know the basics that are behaving like experts. It's probably true in just about every industry.

I like that there are more shops putting out better coffee. How can you not like that? It's increasing the market for coffee. It's weird, but I like that there's suddenly an interest, especially a financial one, in coffee. It's becoming an actual, viable thing. Stumptown, Tonx, Handsome, Blue Bottle, all taking on venture capital. That means that coffee is getting ready, at least the top tier, to become a thing that more people will know about and get to experience. Symbolically, the infusion of capital just means the market will get to have access to it.

One thing that does bother me is the fancy equipment arms race. People are spending shit tons on machines to brew coffee when they should be investing in their own palates and understandings of flavor, and the knowledge of how coffee brewing actually works. At G&B, we have a three group La Marzocco Linea, grinders, and a Fetco brewer. That's how we make coffee. Nothing special. What's special is the coffee. What makes equipment good is whether or not you can brew it successfully.

All this technical gizmo nonsense. I feel like when any new coffee bar opens, you have to write about what the equipment is. There's a certain amount of credibility on what the equpiment spend was. It's really strange and it's just no sign of quality. What I really want to know about are the kinds of flavors they're trying to put into the world. What kind of menu are you doing? What are they focused on roaster wise? That defines what you're going to get, not a $40,000 brew. It's almost always a tremendous waste of money.
· All Go Get Em Tiger Coverage [~ELA~]
· All The Baristas Coverage [~ELA~]