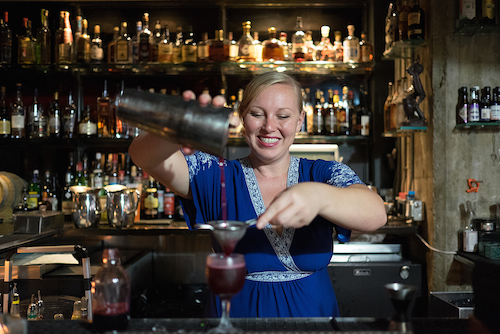 Longtime bartender Danielle Crouch has been a staple at Downtown's Caña for years, serving up everything from Old Fashioneds to Tiki drinks inside the membership-only space on Flower Street. The 213 Nightlife property (Cole's, Honeycut, Seven Grand, The Varnish), which features over 140 small batch rums, helped spur on the downtown cocktail renaissance four years ago, but Crouch makes sure to keep the bar program as relevant as ever. Eater talked to the head bartender about the disappearing learning curve with rum, why Caña is still members-only and what it means to share her rare bottles of booze with customers.

Give us an overview of what Caña is all about. First and foremost, we're a cocktail bar that loves rum. We're kind of getting away from the old name, Caña Rum Bar, because it tends to make people think we don't serve anything else. In reality, we've got all you could want, but it just might be a smaller collection of your favorite tequilas and whiskeys. Still, we're very proud of what we've got on our shelves.

Beyond that, we're known for our sexy patio, our gas fire pit and our exciting live music collection. It's a pretty inclusive room.

So does the vibe change night to night? It definitely changes. We've got live DJs Thursday through Saturday nights. We've been able to find some really great musicians who are willing to come in and like what we do and want to play for us. During the week it's much quieter. We can be a nice, intimate conversation spot. We don't serve food, but there are lots of people coming in after dinner for cocktails. We're a great date night spot. We've had weddings, proposals, engagements here; we're really proud of that because it means people are falling in love here. Making connections, relationships.

Do you find there's a learning curve with rum that there might not be for, say, whiskey or vodka? Over the years, people have become much more knowledgeable. There's a lot less explaining on how you taste rum, how it's made. People ask really pointed questions now. LA's cocktail scene is not going anywhere; people are learning that drinking well is important. It's almost like learning about wine back in the day. You don't need to be a professional, just take an interest. And for us, it opens up opportunities to show someone something they might not try otherwise. Customers get to put a little trust in us.

You've got a lot of rare rums back there. Is there a particular bottle somewhere in the back that you're most protective of? I really enjoy sharing things with people. There are occasionally things that are limited, and I don't want to hand that to someone who will just down it as a shot. But for anyone who is even semi-interested, I love pouring them a sip. Other bartenders come in, and they're surprised we put out the rare stuff.

I'm actually most excited to share our new menu. We're sharing a lot of great stuff for summer, because having fun is really what it's all about. I've found that usually the reason people find themselves eating or drinking a certain thing is because it gives them a sense of nostalgia, and reminds them of some happy place they were at before. So we've done this thing with some of our items where we try to take them to a different place. Local island cocktails, some frozen pitchers, but with the research behind it to find what's best for us. 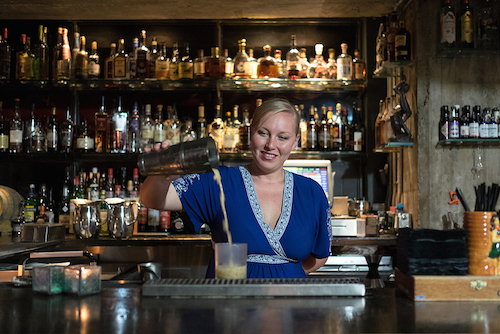 There's the notorious $20 annual membership fee, which goes to charity. Why the buffer? It's actually a stipulation of our liquor license; we have to stay a members club. But people can still come in. Fridays at 6 p.m. we do an 'open swim', which gets people free memberships with the purchase of a drink. If you follow us on Twitter, we'll sometimes offer free memberships to people. I mean, we're not trying to exclude anyone — we want people in the door. It was a bit of a bummer at first, but we've embraced it now. And if there's any perk, it's that sometimes we have people who feel like they have to behave a little bit more, because there's a membership attached. Not always.

Do you think Caña is done changing? Or will it continue to evolve as time goes on? Caña will still be the same, in terms of vibe. That's important to us as a part of what we've created. Not the same drinks, but that same level of adventure.

But we've definitely changed a little bit since we first opened. We had a very simple menu of Tiki drinks, and we'll always have some aspect of that, but we're not a Tiki bar. We're a cocktail bar that has rum. I think we've done a nice job of getting rid of things that we didn't think were up to our standards, little by little. We believe in everything on our shelves. You can come in and ask us what's a good rum, and we can turn around and say just look at the shelf. —Farley Elliott
· All Barkeepers Coverage [~ELA~]
· All Caña Rum Bar Coverage [~ELA~]