Share All sharing options for: Pierre Casanova and Vartan Abgaryan of Cliff's Edge

Welcome to Ten Years In, a feature in which Eater sits down for a chat with the chefs and owners of restaurants celebrating their ten year anniversary. 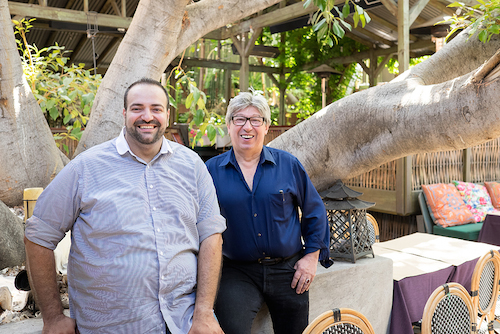 Casanova and Abgaryan on the Cliff's Edge patio. [Photos by Frank Lee]

Over the past two years, Cliff's Edge has gone from a longtime low key neighborhood restaurant to one of Silver Lake's most popular dinner spots, complete with a lush, almost magical back patio. It's no surprise that the revived sense of interest in the now decade-old eatery matches up perfectly with the arrival of chef Vartan Abgaryan, who has helped to imbue the menu with fresh, seasonal cooking.

But succeeding in the restaurant industry for ten years takes more than just great cooking, which is where part owner and all-around front of house wizard Pierre Casanova comes in. The quirky Frenchman has been running the floor at Cliff's Edge since day one, and - despite his very European afternoon nap schedule - shows no signs of slowing down soon. Eater recently grabbed a seat on the patio with Abgaryan and Casanova to talk about what it means to be ten years in Cliff's Edge.

What was in the Cliff's Edge space before you guys took over? Pierre: In the 70's it used to be a lesbian club called Jungle and then after several reincarnations of gay bars and clubs, it became an AIDS patient wellness center, called Being Alive. It was shut down by the city and that is when we took the space.

And Vartan, how much of an overhaul did you give the place when you came on board? Vartan: A full-blown overhaul. The restaurant, I would say, is a completely different one from when I started. I think we've given it more of a focus and identity. I met with the owners, and they really wanted Cliff's Edge to become a destination, because the local crowd was already supporting. The idea was to take the restaurant from being just a beautiful patio to a restaurant with great food that also has that patio space.

Were you worried about having to almost out-cook the patio when you first came over? Vartan: Somewhat. We want the restaurant to be a comfortable environment, and I think our approach is still the same in that regard. But I've always felt like you can have that comfort and still get really nice, refined food. There's nothing wrong with that. I tell our servers to make sure people know that a dish might come to their table that looks really nice and pretty, but to just dig in and eat it.

Pierre: The patio has always been a beautiful and amazing draw. With that said, when we decided to really reach out and capture people, we had to change our focus. We brought in a chef with the intent to make the food the focus of the restaurant. We wanted to be more than a beautiful patio.

Do you think the clientele has evolved since Cliff's Edge first began? Pierre: When we first opened, no one from the Westside would dare come here. It was only locals. But as Silver Lake changed and eventually downtown LA changed, that helped bring in a new clientele.

Vartan: We're definitely drawing a lot more people. I rarely get to see what's going on outside, but I know that we're getting people that are more food-driven. I'm too shy to go out and talk to anybody, so I don't do that, unless I know someone or if they specifically ask. But I get a lot of feedback from our servers, some of whom have been here since day one, and they tell me that it's a great new crowd. 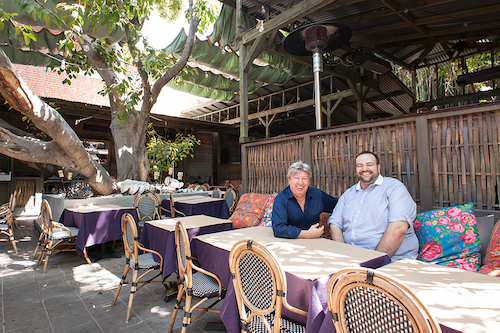 So what does it take to keep a restaurant in business for ten years? Vartan: The best lesson I've learned from Pierre is, it's not how much money you're making, it's how much money you're saving. Honestly, I've been in the industry for twelve years, and nobody has ever said that. A restaurant can do ten million dollars a year, and it doesn't mean they're going to survive.

Pierre: It's just the dedication! You have to be there and try to make people happy. You have to be present for everyone that is coming here to have a good time and have an enjoyable experience. And never let success get to your heads. It's just food.

You must have seen a lot in the decade since this restaurant has been open. Any particularly great stories? Pierre: t's amazing. Some things I can't say. I would like to, but I just can't. But the more special memories are the ones where couples came here for their first dates  and come back to celebrate their wedding anniversary. It's always a special feeling for them and for me.

Vartan: We've had some really fun nights here. One night we did 275 people for dinner, without any problems. And the food here is very involved. I gathered everybody around afterwards and just told them all how amazing they were. But our ten year anniversary dinner … oh my god. I can't believe so many other chefs even showed up. I mean, when you put it all to scale, I'm a nobody, I'm not even close. It was really amazing.

And now that you're ten years in, where do you see Cliff's Edge growing from here? Pierre: Well, we want to maintain our course, for sure. For me, I just want to continue to bring new guests and please the ones who have been coming and sharing the life and memories with us. —Farley Elliott
· All Cliff's Edge Coverage [~ELA~]
· All Ten Years In Coverage [~ELA~]