Welcome to The Five Days of Meat edition of Lifers, a feature in which Eater interviews the men and women who have worked in the restaurant industry for the better part of their lives, sharing their stories and more. 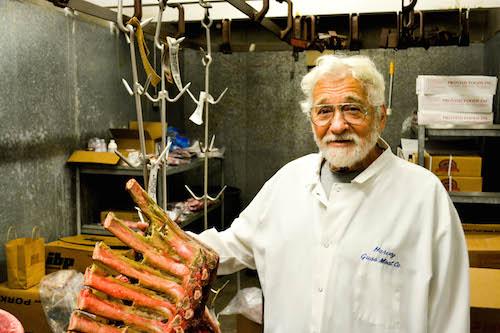 Depending on who you ask, Harvey's Guss Meat Co. is either a well-known commodity or the local butcher you've never heard of. But for folks in many of the city's best kitchens -- think The Peninsula Hotel, Spago, Mozza, Angelini -- Harvey Guss's dry aged steaks are the best in town.

The no-nonsense meat man has been hidden away in a back alley just off Fairfax and San Vicente since the 1940's, and only recently added a retail component to go along with his life of wholesaling to steakhouses and prime kitchens in Beverly Hills, downtown and beyond. He still uses a typewriter for all of his invoices, though. Eater sits down with Harvey Guss to discuss his sixty years in the business, selling hot dogs to Pink's and the steak he still loves to eat. Just don't tell his wife.

And there was never anything else you wanted to do? Oh, sure there was. But in the '50's, all my friends started going into the mail rooms at William Morris, places like that. My father said he needed me here, and so I thought well let me see: I can get $60 a week in the mail room, I can get $250 a week starting at my dad's. And in 1955 that was a lot of money.

How many accounts do you currently have? Now? Oh, not very many. Maybe a dozen. At the height we had maybe forty. We used to do Pasadena, downtown, all the way to Manhattan Beach. That's when I had five trucks on the road, six days a week, twelve hours a day. And maybe ten years ago, my wife said no more Saturdays. Then about five years ago she said, you know, a lot of our restaurants, Angelini and places like that, are closed on Mondays. There's only like two three deliveries, let them figure it out. So now I'm down to four days a week, and I close at noon.

Those accounts must have changed a lot over the years. Oh sure. I used to sell Lawry's, and then they were bought out. And a lot of restaurants, when they change chefs, they've got their own butchers that they use that know what they want, how to cut it. So they go back and forth. But La Cienega, god knows. Kent's Steakhouse used to be there, Hammond's, Alton's Steakhouse, places that no one even remembers.

I still sell the Hoffy hot dogs, the ones Pink's used to use. My dad was the original supplier, and we sold them for 51 years. And then Gloria Pink took over the business, and she's a very sharp woman, and she wants everything up for bid. So you have to bid on all her products every two weeks. And I don't sell that way. I mean there are jobbers out there, guys that can just pull up in a truck, who knows where they got the stuff, and they work for very little. I have overhead.

How do people find you? I don't solicit. They listen to Yelp or they talk to other chefs. When my dad was running the business, he had two salesmen on the road, and they kept us busy. But I cut the whole operation down. I just didn't want to work so hard.

How often do you go out and eat a steak yourself around town? Oh, very seldom. The only steak I'll eat outside would be a rib steak or a ribeye steak. My wife doesn't want me to bring it home. She says it's not healthy.

So who's going to step in when you decide to retire? No one. Ideally, it would be my son, who takes over when I go on vacation. But he's an accountant. He says Dad, I make more money than you, I sleep until 7, I have breakfast with my kids, I take them to school. But I'll stay at it until I can't. A year or two anyway. —Farley Elliott
· All Lifers Coverage [~ELA~]
· All Harvey's Guss Meat Co. Coverage [~ELA~]
·; All The Five Days of Meat Coverage [~ELA~]