8 Things to Look For At This Year's LA Food & Wine

Share All sharing options for: 8 Things to Look For At This Year's LA Food & Wine

And just like that, this year's L.A. Food & Wine Festival is upon us. The annual fête, now in its fourth year, always offers a hearty mix of celebrity chefs (both local and national) working the stages via seminars and cooking demos, plus packaged food events that take place in some of the city's best kitchens. There are the big anchor nights like the Asian Night Market on Friday, which takes over a chunk of Grand Avenue, plus the dual Lexus Grand Tastings midday Saturday and Sunday. In all, L.A. Food & Wine promises to be a multi-day, city-wide feast — at least for anyone able to pony up for the entry fees, the cheapest being a few $50 cooking demos from the likes of Scott Conant and Graham Elliot.

So what can one expect from this year's four day party? A mix of cheffy glad-handing, incredible food, engaging seminars and endless after-partying. Here are eight things to be on the lookout for at this year's LA Food & Wine.

The Asian Night Market
Perhaps last year's biggest party, the Asian Night Market takes over a stretch of Grand Avenue on Friday night, right in front of the Walt Disney Concert Hall. Complete with a long red carpet to make guests feel like VIPs, the event is an upscaled take on the night market movement that's only grown more popular in L.A. Expect chefs like Charles Phan from the SF's Slanted Door, chef Yoya Takahashi from Hamasaku in L.A. and the Iron Chef Morimoto himself serving as emcee.

Chefs Dancing Awkwardly to Common
Chicago-born rapper Common is lined up to play to the Grand Avenue crowds on Saturday night's Lexus Live on Grand event. If last year's Questlove set is any indication, expect plenty of theatrics — and one or two L.A. notables really hitting the dance floor hard. 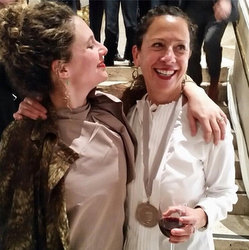 Lots of Out-of-Town Chefs at the Mozzaplex
Outside chefs have been pouring into L.A. early for the weekend's festivities, and more than a few have been hitting up Chi Spacca and the Osteria. Silverton herself was hanging around Chi Spacca on Monday night, checking in on guests. Her Friday lunch event alongside NYC's Jonathan Waxman is already sold out, though the James Beard Outstanding Chef award-winner will be getting her own 10:30 p.m. tribute dinner at Vibiana Friday night.

Eric Greenspan Putting Up a Challenge or Two
Greenspan has never been one to shy away from friendly chef confrontation, and his aggressive cooking style will be on display at Thursday's Ultimate Bites of L.A. downtown. Is he going to try to out-charcuterie Ori Menashe, out-fish David Lefevre or out-pastry Jessica Koslow?

An Embarrassment of Wine Riches
One half of the Food & Wine equation, the vino is often overlooked at the larger chef-heavy events like the Lexus Grand Tasting. Don't sleep on the more than 100 international vintners who are descending on L.A. from around the world, particularly during the decadent I Heart Champagne & Caviar event on Friday night.

A Rare David Kinch Appearance
Kinch, the chef-owner of the recently fire-damaged Manresa, will be taking some rare time away from his Los Gatos restaurant to plate up a $500 dinner alongside fellow Michelin star chefs Michael Cimarusti of Providence, S.F.'s Dominique Crenn of Atelier Crenn and Pierre Gagnaire of Twist in Las Vegas.

A Whole Bunch of Mash-Up Lunches
Priced at around $125 each, these Friday lunch events run from the beach to Beverly Hills to downtown, and tend to actually put together some interesting combinations. Slanted Door's Charles Phan working a kitchen alongside Hinoki & The Bird's Kuniko Yagi, or Walter Manzke at S.F.'s Michael Tusk pulling together a four-course lunch (with wine pairings, of course) at Republique.

The After-Parties
Like any large-scale event that brings so many like-minded personalities together, it's all about the conversations you overhear — and the after-parties. Evening events like the Asian Night Market are best for tagging along with chefs who are letting loose in L.A., and it's never hard to find a group of out-of-town cooks heading towards Little Tokyo or down Grand Avenue in search of a late night meal and lots more booze. 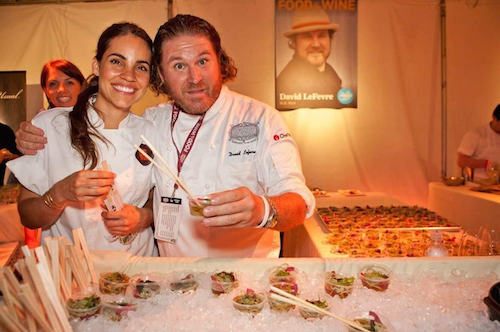