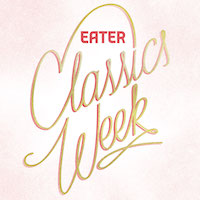 Mid-Twentieth-Century Los Angeles was a place built on ca hamburgers. As the city abandoned public transportation and became car-dependent, it also grew to love roadside restaurants, where a driver could pull over and have a burger and shake handed to him right through the window. Several of today's most popular fast food chains started in greater LA, more often than not in oddball buildings designed to attract the attention of passing motorists. To help our pals at Eater celebrate Classics Week, here's a look at where the classics all began:


[Image via Bobak Ha'Eri / Wikimedia]
The original Original Tommy's still stands today at Beverly and Rampart, where it was founded in 1946 by Tom Koulax on the back of the then-novel chili burger.

A black woman named Lovie Yancey founded Fatburger (then Mr. Fatburger) in a tiny building on Western Avenue in 1947, serving hamburgers because "they were the fastest-selling sandwich in America," according to an interview she gave in the 1980s. The three-stool outpost hosted Redd Foxx and Ray Charles over the years and stayed under Yancey's control even after she sold the chain in 1990. She died in 2008 at the age of 96 and her first burger stand has been incorporated into an affordable housing development on the site.


[Image via Googiesque / Curbed LA flickr pool]
Though it has locations in other Western states, In-N-Out is synonymous with California fast food. The structure believed to be the drive—through that launched an empire—California's first for hamburgers when it opened in 1948, the chain's website claims—was demolished in 2011. The company built a replica of the restaurant at the same location, but it only serves souvenirs.

What was in the water in 1948? That was also the year that the first McDonald's burger joint opened in a hexagonal structure at a San Bernardino location on E Street. (Richard and Maurice McDonald first opened McDonald's Bar-B-Q, a drive-in with a large and varied menu, in 1940, on the same site. They retooled after they realized everyone just wanted hamburgers.) The restaurant was demolished in 1957 in favor of the golden arches version, and the spot is now owned by roasted chicken chain Juan Pollo; it serves as a combination Juan Pollo office and McDonald's museum. The oldest operating McDonald's-the third ever opened-is in Downey.

Today hot dog chain Wienerschnitzel is known for its A-frame huts, but the original location opened on Pacific Coast Highway in 1961 in a walk-up/drive-through, flat-roofed little shack. Founder John Galardi worked for many years for Taco Bell founder Glen Bell and this site sat next to one of Bell's pre-Taco Bell restaurants; Bell encouraged Galardi to open his own fast food joint, so long as he didn't sell tacos. Bell's wife suggested the nonsensical name. The shack is now a Los Angeles city landmark.


[Image via Pam Lane / flickr]
Glen Bell opened the first Taco Bell in March, 1962, serving fake Mexican food (in hard taco shells) in this fake Mission building in Downey, California. The building later became an independent Mexican restaurant, eventually lost its bell, and today sits closed behind a fence; the Downey Conservancy is hoping to preserve the building. Meanwhile, there is, naturally, a combination Pizza Hut/Taco Bell just across the street.


[Image via Panda Express]
Panda Express began in Pasadena in 1973 as the upscale Panda Inn, founded by Chinese immigrant Andrew Cherng, with Mandarin and Szechuan recipes from Andrew's father, chef Ming-Tsai Cherng. He expanded to Glendale, where he caught the attention of the operators of the Glendale Galleria, who asked him to open a fast food version in 1983. Andrew brought in his wife Peggy to help run the operation and the couple are still in charge today. There are now two Panda Expresses at the Galleria.