The Epic Rise and Fall of Ma Maison, The Restaurant That Made Wolfgang Puck Famous

There's celebrities, scandal, and the birth of California cuisine.

Share All sharing options for: The Epic Rise and Fall of Ma Maison, The Restaurant That Made Wolfgang Puck Famous

There is no doubt that Wolfgang Puck helped usher in a new era of food culture in Los Angeles when he brought California cuisine to national attention in the late 1970s. Puck's exploration of California's bounty began at West Hollywood's legendary, and now lost, Ma Maison.

The brainchild of Patrick Terrail, a Parisian with a strong hospitality background, Ma Maison opened in 1973 on a rather rundown street named Melrose Avenue. With backers like Gene Kelly, the restaurant at 8368 Melrose (the approximate location of ink.sack and Sweet Lady Jane today) quickly rose to become a magnet for Hollywood's elite.

Ma Maison rebelled against fine dining establishments of the time

The Ma Maison experience was as glamorous as it gets. Rolls Royces and Bentleys were squeezed in the parking lot, complimentary kirs greeted each guest, and menus were designed by artists like David Hockney. But the restaurant rebelled against fine dining establishments of the time, and found greatness in eccentricity. The main dining room, instead of being dark-paneled and dimly lit, was an Astroturf-lined patio, and the cuisine, instead of focusing on heavy proteins and starches, was something altogether different and nouvelle. 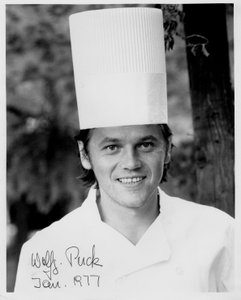 The catalyst came in 1975 with the addition of a young Austrian chef named Wolfgang Puck. Puck and Terrail immediately hit it off, both with a love for farm-to-table cuisine before farm-to-table was even a thing. By using ingredients sourced from the local farmers markets that highlighted the glory of California's produce and pairing it with French technique, they created a new type of cuisine, "California nouvelle."

Packed in the patio were the likes of Jack Nicholson, Burt Reynolds, Fred Astaire, Elton John, Rod Stewart, Ringo Starr, Stevie Wonder, and Marlon Brando. Not only was the restaurant a hub for some of the biggest celebrities of the time, but businessmen and lawyers also dominated the space for what became known as Ma Maison's "drunk lunches." Debauchery ensued, and conspicuous consumption to the highest degree was commonplace.

Businessmen and lawyers  dominated the space for what became known as Ma Maison's "drunk lunches."

For all the glitz of Ma Maison's clientele, the caliber of the food can't be overlooked. The progressive nature of the cuisine was experimenting with the best that California had to offer, and was turning out dishes like saumon fumé, warm lobster salad, and lamb tenderloin with Roquefort sauce. Susan Feniger worked as a line cook, and jived well with Puck's laidback vibe. Feniger later left to open her own restaurant, and, in 1981, so did Puck to open a little restaurant called Spago.

It is only fitting that a restaurant so storied come crashing down into headline-worthy demise. Ma Maison's fall from greatness began when sous chef John Sweeney strangled his actress girlfriend to death. As many Ma Maison loyalists believed that because Terrail still supported Sweeney, the glamorous clientele that once frequented the restaurant began to peel away until the restaurant closed in 1985.

While Ma Maison came to a more-than-unfortunate end, there is no contest as to the lasting imprint it had on the culinary landscape of Los Angeles. From the creation of California nouvelle cuisine to the beginning of Wolfgang Puck's meteoric rise, food-loving Angelenos can certainly respect its contribution to the city's rising status in the national food scene today.