The man behind one of L.A.'s best chronicles of forgotten gems.

Evanier is a collector of the forgotten, a storyteller for restaurants whose time has passed — so long as he’s eaten there before, of course. "The thing that people don’t get is that it’s only about restaurants that I’ve eaten at," says Evanier from his home in the Fairfax district. "Otherwise, there’s no story!"

Either way, Evanier, a longtime writer, has become a sort of placeholder for L.A.’s constantly churning culinary scene, digging up old photos and memorabilia to slap onto stories about long-forgotten steakhouses, barbecue joints and pharmacy counters, complete with soda jerks. The open comments section for each forgotten restaurant is still alive and kicking too, with former customers and workers chipping in their two cents to help build a memory. Eater talked with Evanier about his love of old restaurants, why they still matter and where he likes to eat today.

How did you come to start OldLARestaurants.com? I have a personal blog, newsfromme.com, that I’ve been writing on for about 15 years. And I would write about these old restaurants that I used to go to. They just kept popping into my head, and I would gather all of these photos that I wanted to share with my friends. So eventually I made it a dedicated section of the site, and then discovered that oldlarestaurants.com wasn’t taken, so I grabbed it as a way to isolate all of that material.

And now it’s easier for people to find. Absolutely. But still, not everyone gets it right away. I get emails about places that I’ve never been to, angry emails that treat it like a factual error that I’ve omitted someone’s favorite restaurant. I once got an angry email from Hamburger Hamlet asking why they hadn’t been included, but they were still in business at the time!

What are some of your favorite restaurants that have now disappeared? I used to love Woody’s Smorgasburger. It was my favorite hamburger in L.A. Now, people who used to work at Woody’s have found their way to my site, and so the forum is alive with people talking to each other.

My favorite restaurant I ever ate at was called Zito’s, on Pico near Westwood. It later became Anna’s. Zito’s was the best Italian restaurant I ever ate at in my life. I actually went to high school with one of the daughters of the owner. We didn’t get along, but I used to think about trying to marry her just to get the recipe for their meat sauce! When they closed, I was heartbroken. 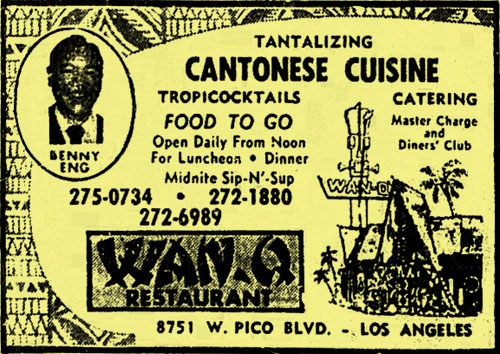 I’m sure a lot of these places, because you’ve had a personal experience with them, must have been hard to watch die. Oh, there are certainly those sad places that you associate with your childhood. Wan-Q on Pico, for example. Every Jewish family had their favorite Chinese restaurant, and that was ours. I took my first date there. Thankfully, the building has stayed lucky for me, because it’s now my current favorite Chinese restaurant, Fu’s Palace. I actually bought the place out for my 60th birthday.

How do you determine what makes the list, other than having been there yourself? One of the problems is that a lot of these places, I might have gone to them but I don’t have any visuals, or there isn’t an interesting story or any insider information. You can’t write unless you have something intriguing to say.

What attracts you to restaurants? A lot of the joy with restaurants is taking friends there and having them love it. It’s almost like you cooked the food yourself. To have peoples face light up when they take that first bite, there’s something personal about that. It’s unique to restaurants in that way.

Part of this all for me is just to see what people have to say in the comments section, to get these remembrances. You’ll see an awful lot of people saying that their family worked there, things like that. It’s interesting how personal they can be.

The comments section really is pretty prolific. It can even eclipse the story itself sometimes, offering details that you could never have known. The commenters have been wonderful. I have a theory that if you went to a strange town and wanted to know where to get the best ribs, if you went on the message boards for that town and asked, you’d get five, maybe six responses. But if  you went on and said that as far as you were concerned, this restaurant served the best ribs period, you’d get probably 700 responses telling you where to actually go and why. Everyone has an opinion.