Plus the early word on The Rose in Venice, and a hot dog party you don't know about.

Slaw Dogs lands at The Village at Westfield Topanga

And they’re opening this Friday with a bang. There’s going to be beer and wine tastings, free food, and live music. The hot dog party runs from 5 p.m. to 7 p.m. out in Woodland Hills.

Be the first in line at LocoL

According to Roy Choi’s Twitter account, the first 100 people in line once LocoL actually opens will get a ’special gift’. No word on what that might actually look like, but who doesn’t love standing in line for free stuff?

The early word on The Rose

LA Weekly files one on Venice's new all-day dining spot, saying mostly that the place is still finding its footing. The key for now, its said, is to stick with the the sort of hits that Neroni has been cooking since his Superba Snack Bar days.

The upcoming Grand Central Market pasta bar from Bruce Kalman is almost ready, which means its job fair time. Get to GCM tomorrow and Friday for the opportunity to work with one of the city’s best pasta makers; details below.

Calling all pasta lovers!! We are looking for some great people to join our family - Job Fair Dec 17 & 18 from 9a-12p & 2-4p @grandcentralmarketla #pasta

The gourmet vegan cinnamon roll shop earned a touch of fame after competing on Shark Tank, and will be bringing their newly franchised concept to LA County sometime soon. No word on official locations just yet, but there are more than two dozen in the works so expect an invasion sometime soon. 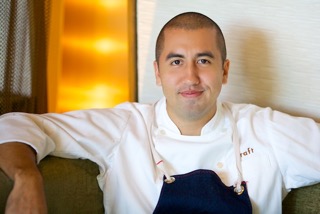 Ray England is out at Craft, having relocated across the country with his family. The longtime CDC was the everyday face for the upscale restaurant, but now comes Drew Gavalla (pictured at the right), who has been with the Craft team for eight years. He started as a line cook there in 2007.

Daikokuya DTLA is closed (for now)

Don’t worry, the Little Tokyo shop isn’t disappearing altogether. Far from it. According to signage on the window, they’re just taking some time to learn up on their ramen skills back in Japan. Per the photo, they plan to come back with even "more power and energy". Sounds awesome.