Silverton is back in the wholesale food game with a new line of premium gelati and sorbetti.

Nancy Silverton — prolific baker, pastry chef, cookbook author, chef, restaurateur, and business woman — is diving back into the world of wholesale, widely distributed food for the first time since she sold La Brea Bakery in 2001. Since then, Silverton has started a restaurant empire (Mozza, Pizzeria Mozza, Chi Spacca) and consulted on the menu at now-shuttered burger shack (Short Order). Not long ago, she was approached by LA Creamery, a local retailer, to develop a brand of namesake gelati and sorbetti. Starting today, Nancy's Fancy is available for purchase at Gelson's Markets across Southern California.

We reached Silverton by phone to ask her about the development, style, process, and future of Nancy's Fancy. Here's what she had to say:

Gelato has less fat, less eggs, and less air than a traditional ice cream. These elements contribute to a much more flavorful frozen dessert. That was something that had always bothered me about high fat and high egg yolk ice creams. The initial flavor satisfaction was always delayed because the warmth of your mouth had to get that flavor. On the gelato side, is a little bit closer in the makings of sorbet.

There's a big difference in the make of up of a sorbetto and a sorbet. Sorbet, you just combine the flavor, which is usually the fruit juice, and then water, and then sugar. Sorbetto, to make it correctly and to make it the right color and right mouthfeel, and the right satisfaction, there's a ratio of the different components or else it won't be emulsified. There's a certain percentage of fruit, water, sugar, and stabilizers (if you're using them). I know from many, many experiments that if you're off on any of these components, the color is off, it doesn't hold in the freezer.

Why start a gelato line now?
LA Creamery — who, by the way, happen to be the people, the gentleman that is a partner in LA Creamery is in charge of our valet service — approached me with an idea for a high end line, and I liked the idea.

Why is it only offered at Gelson's?
Gelson's because it's a local supermarket, high end, but the other thing is they were willing to take it right away without seeing the packaging, which we're still tweaking. That was the only one that was willing to place an order and wanted it right away. Eventually we will expand nationwide, but we're starting with Gelson's to get our packaging down and tweaking the final flavors. There will be seven flavors total. 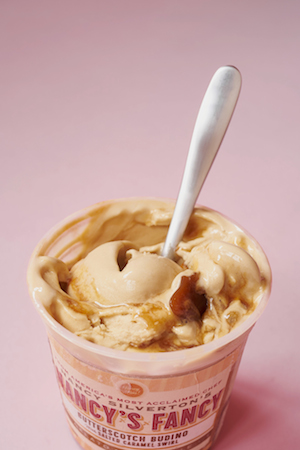 What's the full line up?
Right now Gelson's has yogurt with frutti di bosco, which is a berry mixture; coconut stracciatella, which is like chocolate chip but with strands of chocolate in it; butterscotch budino with a salty caramel swirl, which is my answer to the salted caramel flavor everyone is doing now; roasted banana with pecan praline. Three more flavors are coming: Chocolate fondente with chocolate chips, which is actually dairy-free: it's a sorbetto. And that's another thing about sorbettos if you make them right, they're not icy like sorbets. They are so smooth you don't notice if they have no cream. We're also doing a peanut butter with salted peanuts and a spiced coffee with cracked cocoa nibs. If I have to say what that tastes like, it's like a Chai coffee.

Was the recipe testing done at Mozza?
Well, we make most of these flavors at Mozza, except the butterscotch budino because that's a dessert on the menu. But in order to get the recipes to scale properly we tested them off-site. We tested it at a commercial facility so we could judge what some of the recipe development complications were going to be.

Will you be serving Nancy's Fancy at Mozza, Chi Spacca, or Short Cake?
We'll continue to make the flavors we make at Mozza as we make them. Nancy's Fancy will not be served at the restaurants.

Have there been any challenges?
Like anything else, it's on a large scale, like Rick Bayless's salsas, or Mario Batali's pasta sauces, you have to work very closely to be able to replicate what you're doing already. So there's still some tweaking to do. It's important to not lose sight of the recipe, of the quality.

A lot of people wonder this about Jeni's too, but especially because you're not using as much cream or egg yolks — both of which are expensive ingredients — why is the gelato and sorbet going to be so expensive?
I don't buy ice cream at the store, and don't really shop in the frozen section of the supermarket so I had no idea that there were suddenly so many ice cream brands. Apparently there's a lot of competition among the $5-$6 price range, but not at the high level. I don't know if you've heard of Jeni's Ice Creams, which is priced around the $12 mark? That's our level, that's what we're competing with.

Any plans to open Nancy's Fancy ice cream shops?
You know what, there could be, though it's not something I've thought much about.