What It's Like Inside Serafina's Clubby West Hollywood Digs

Experiencing one of LA’s newest celebrity hotspots on the ground

Welcome to the Lounge Report, a new series where Eater LA Associate Editor Crystal Coser vets bars, clubs, and sceney restaurants so you don’t have to.

For the inaugural edition, we take a look at Serafina, the New York-based restaurant with outlets throughout the Big Apple, Boston, and abroad. I received the impression before visiting that Serafina was popular amongst a certain set of New Yorker, and a quick Google search (plenty of Kim and Kanye sightings, oh my!) confirmed my suspicions.

With the partners in the first LA outlet being LORE Group (Rock & Reilly’s, Pearl’s), Serafina Restaurant Group, movie producer Stephen Belafonte, and his wife Mel B of Spice Girl fame (cue 10-year-old me squeals), this opening was sure to take up splashy real estate on online tabloids.

This place is sure to show up on online tabloids

So we prepared for a proper Girls Night Out. Tight dresses, chokers (so very a la mode), and six inch stillettos were donned. Feeling more glamorous than our UberX should otherwise allow, we descended on Sunset Boulevard right below the restaurant’s signature yellow awning.

The first thing that struck me about the space was that it looks exactly like its former iteration, the very short-lived Maia. Perhaps the booths are a shade lighter than the previous LORE Group concept and slight Asian accents have been replaced by bric-a-brac, but the structure seemed to be entirely unchanged. Way to save on those remodel costs.

Still the initial experience was a pleasant one. The hostess was genuinely warm and especially accommodating, albeit the location in the heart of West Hollywood. Thanks to a bar located in the very middle of the space between the indoor and outdoor dining wings, a tight bottleneck of imbibers sort of lent to a lively atmosphere that set the tone for the rest of the night.

Seated in a prime people-watching spot, it was hard to deny the familial vibes throughout the space. Belafonte seemed to be familiar with plenty of diners, and everyone seemed generally content to be eating what ended up being (spoiler alert!) rather mediocre Italian fare.

I’m happy to give credit where it is due, and sincerely thank the servers and especially the hostess, who checked back in on us towards the end of our meal, for earnest service that didn’t feel anything but genuine, but there was a generous fifteen minute gap between ordering cocktails and the rest of our meal. And when your appetizers and entrees are subsequently dropped at the same time, with cocktails following a few minutes behind that, allowances for warm service are quickly chipped away. 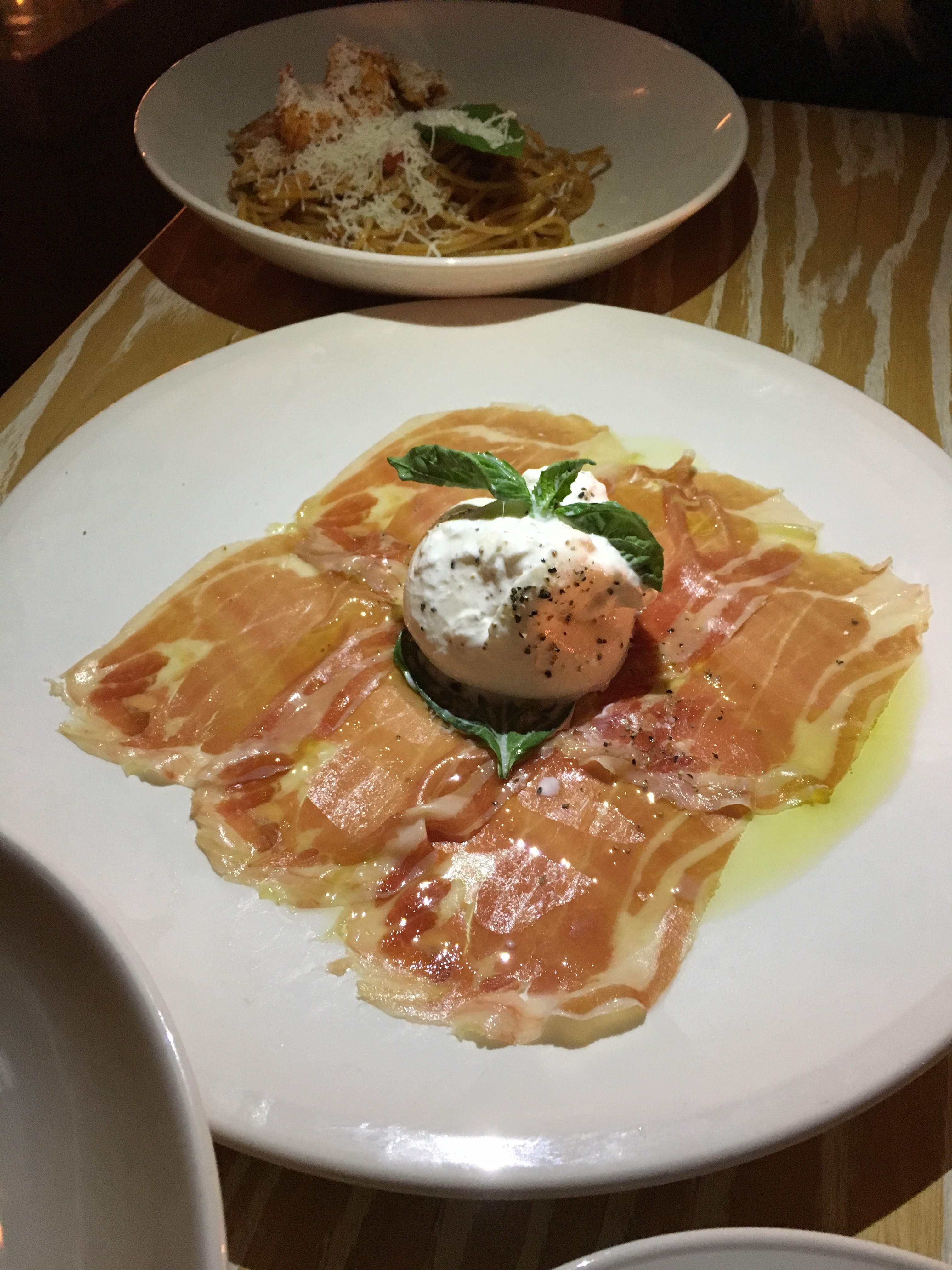 After playing tetris with our plates and quickly swigging a watery ginger and tequila concoction, we nibbled on a lovely plate of prosciutto burrata. If nothing else, the supple cheese seemed to be of relatively decent quality and was quickly consumed by our table of two.

The pastas, though, were not so successful. The hastily plated plates had a generous portion of perfectly al dente pasta, but that’s about the best that can be said about the two dishes. The uni pasta had a handful of shriveled pieces dispersed through the olive oil, so the pasta ultimately felt more like uni-infused oil sauce as opposed to a luscious, creamy taste of the sea. The lobster spaghetti, sparsely coated in tomato sauce, didn’t have enough of the marinara to disguise the overcooked nature of the lobster tail and claw. Oh well, as the second round of cocktails reached the bottom of their glass, the lobster seemed to disappear.

Our meal was concluded with the restaurant’s signature truffle pizza. Apparently Serafina is known for the many varieties of the thin-crusted stuff, and for good reason. The pizza was far and away the best dish we had, and was delicious by any restaurant’s standard. Granted, slather anything in cheese and plenty of sliced truffles, and you’d be hard pressed to make something you wouldn't inhale. The crust was, however, a perfect vehicle to soak up the truffle-y cheese. 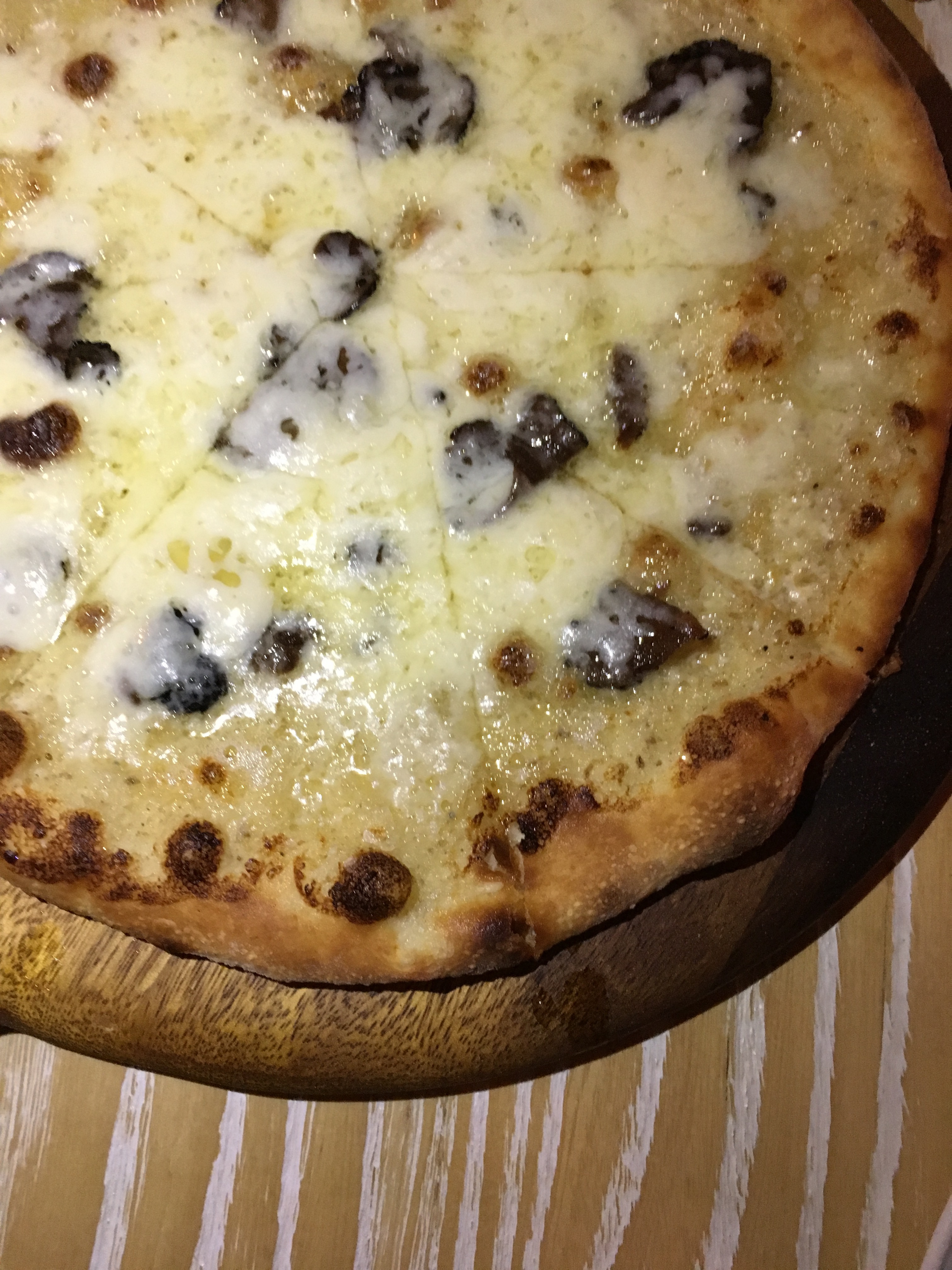 As the next round of cocktails arrived, the restaurant investor formerly known as Scary Spice took a seat at the table in front of us, much to our teeny bopper glee. The tables to the left, another group of choker-wearing ladies on a girl’s night out very much like our own, and on our right, and older crew of ladies (who honest to god also sported the tight necklace fashion) and gentleman seemed to shift their focus to cocktails along with us, all clearly ready to begin their nights of debauchery.

We politely declined dessert in anticipation of the the rest of the evening’s schedule. On our way out, the same hostess gave us a warm send off before I nearly ran in to Tara Reid as I turned around. Fitting.

I don’t feel particularly let down by Serafina. The service was far better than it could have been for restaurants of this class, and my expectations were tempered to begin with. Stick with infallible dishes, sip one more cocktail than you should, and have a fine time taking in all the glitz and glamour of the Sunset Strip.