Local Kitchen: The stretch of Ocean Park through Santa Monica is mostly forgettable unless you live in the area (though Vito makes very good old school pasta and martinis). That makes Local Kitchen, a true neighborhood restaurant if there ever was one, stand out even more. The fare, by chef Stephen Murray, is the kind of approachable California-Italian food that any smart restaurateur would put on a menu these days. Owner Maire Byrne, who trained at the CIA and Chez Panisse before opening this hidden gem, knows that what people want every night of the week generally consists of some salad-type thing, a pasta, and pizza.

My visit was pretty terrific experience-wise: a bustling dining room, a cheerful patio shielded from the late summer’s long sunset, and generous service. The food itself I found likable and ambitious enough for a place like this, but not perfectly polished. Think of it like an outfit: remove one ingredient and it’s perfect.

Our uni toast didn’t need borage flowers as a garnish. The trofie pasta, with a delightful texture and preparation, didn’t need both bottarga and uni to provide briny savoriness. Instead the two ocean delicacies clashed. The anchovy pizza, topped with tender white anchovy instead of the super salty ones that the Teenage Mutant Ninja Turtles avoided, would’ve been perfect if not for olives, which again countered the fish’s saltiness. I did however, really enjoy the brick chicken, with a salty-sweet balsamic glaze that felt rightfully composed and almost lonely (in a good way) on the plate. I’ll be back to Local Kitchen, next time looking for menu items that do more with less, and soaking in that relaxed neighborhood vibe. —Matthew Kang

La Brea Bakery: is a lot of things these days: it's a bread company that supplies thousands of loaves a day to restaurants and grocery stores across the country. It's also a cafe space right on La Brea, about 100 feet from the original iteration of the name (in what is now the waiting and pastry line for Republique). And it's also an idea, a notion of what baking (and, by large extension, Nancy Silverton) means to Los Angeles. So how does the physical restaurant juggle everything at once?

It's an interesting question, and one you might be better off trying to answer in person. The corner address offers loads of light and as much gluten porn as any indie baker might, but make no mistake: this is a professional operation with a serious side. Founder Nancy Silverton sold away the place years ago but maintains a strong connection to the company (it's where Mozza gets their pizza dough, after all), and in the years since, the brand has jumped to nationwide distribution with a commercial bakery on the East Coast as well. Most of the breads and pastries you see in the glass display case were actually made in the large bakery just south of the cafe, while others were rolled and shaped by hand in the back. 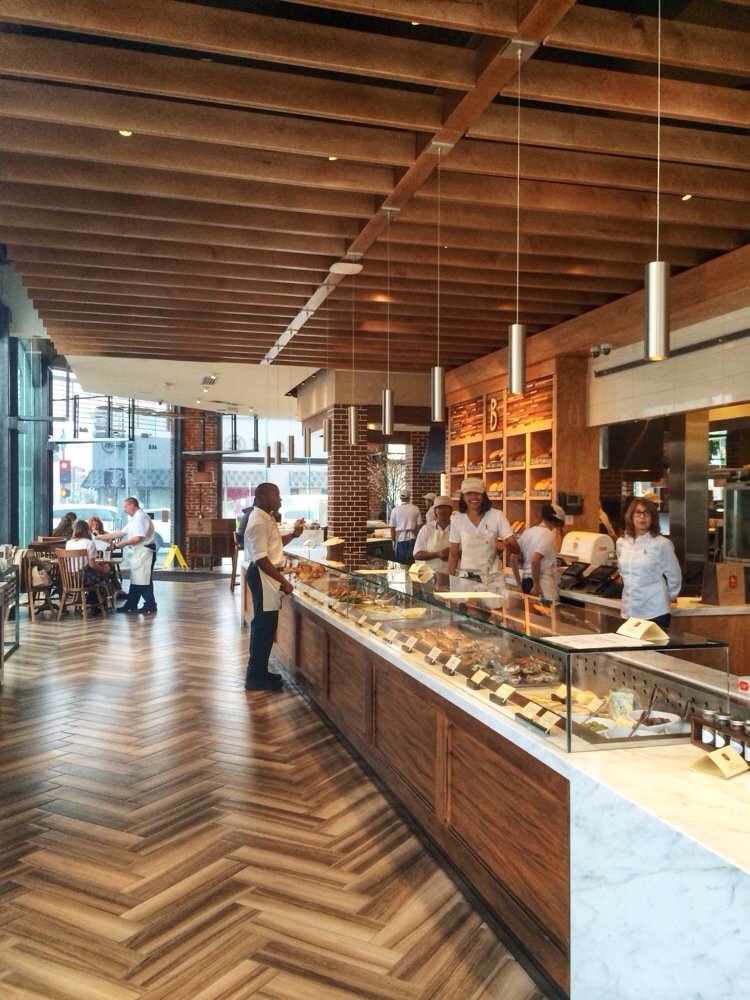 But the best thing is, even if you peek through the veneer of reclaimed wood and slick we-keep-it-local branding, there really is a ton of honesty at the heart of the La Brea Bakery cafe. Their breakfast and brunch foods are legitimately awesome (especially, predictably, things like french toast), and there's room to stretch your legs with a cup of coffee and a friend. You'll find laptop warriors clacking away in one corner, and familiar families lining up for take-home breads up near the front. The restaurant is a bona fide local hit, and on weekdays the room fills up quickly with diners who either can't stand the sidewalk line at Republique, or know that a similar meal, offered steps away and at a lower price point, is almost always going to be the way to go.

Mark La Brea Bakery down as the rare company that has largely succeeded in being both a national name and a local star, complete with the big name chef on background. After all, look at what happened with Bay Area mainstay La Boulange after they partnered up with Starbucks (spoiler alert: it didn't end well).

Stop by sometime soon to see for yourself if you're still skeptical. You'll find a restaurant on top of its game, unafraid to be a strong pastry player on a block filled with popular one-off names like Republique and Sycamore Kitchen. You'll also find a company with big national interests that knows there's nothing better for the bottom line — or the customer — than crafting a well-run, consumer-facing space where the high-volume products you sell can be touched and tasted with ease. Think of the La Brea Bakery cafe as a one-off Apple store, loaded with products and adoring fans. And some awesome french toast. —Farley Elliott

What first struck me about Kali was the exceptional service right off the bat. The little details — replacing the white napkin with black to match my dress, the perfect pacing of the dishes — were reminders that restaurants really are a part of the hospitality industry where the guest comes before all else. A little pretension wouldn’t have been all too surprising given the pedigree of chef Kevin Meehan and wine director Drew Langley, but the duo work in perfect harmony to create a welcoming environment where the precision of wine pairings allude to their close relationship instead. More restaurant partners should be longtime friends.

Little needs to be said for the food, as the one visit I had there confirmed the overwhelmingly positive LA Times and LA Weekly reviews. I took a particular liking to the beautiful berries and tomatoes starter, and that wheatberry risotto that merits all the fuss.

Don’t make the same mistake I did and wait too long to finally make it in to the new critical darling. I can think of no better new restaurant than Kali to treat the parents, a date, or yourself. —Crystal Coser

Tam O’Shanter: I’ve been lucky enough to dine at Lawry’s The Prime Rib off La Cienega on quite a few occasions, so when I heard that we were having dinner at The Tam O’Shanter (or "The Tam") in Atwater Village, you can imagine I was a bit excited. First, some history: The Tam is one of the oldest restaurants in Los Angeles. Opened in 1922 by Lawrence Frank and Walter Van de Kamp as the Montgomery Country Inn, it’s become a local favorite for its prime rib and for being a favorite haunt of Disney animators, including Walt Disney himself. 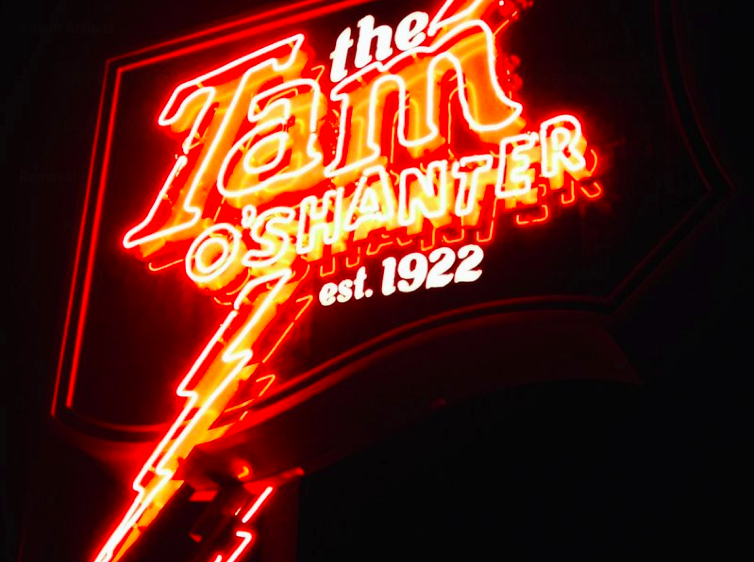 While the pub at the Tam O’Shanter is a great place to catch the game (and to order a dram of Scotch), the dining rooms are an amazing place to tuck in to a full roast dinner, adorned with flags bearing coats of arms and portraits drawn in Scottish-Renaissance style as well as miniature illustrations in multiple Disney animation eras. The dining room ambiance is much more conducive to, say, someone who works at a startup and is in a perpetual chambray-and-jeans ensemble than the massive, special-occasions dining room at Lawry’s, with a more convivial and familiar service style to match.

Though both Lawry’s and the Tam serve up the same prime rib roast with horseradish two ways (and as far as I know, the same mashed potatoes and creamed corn and spinach), each restaurant has its own distinctions. For one, the Tam offers more Scottish-leaning cuisine and pub fare, including rarebit, a kind of northern queso with a kick that’s served with grilled sourdough — don’t miss it. The Beef Bowl cut (the bone-in double cut traditionally eaten by participants in the Rose Bowl served at Lawry’s) isn’t available at The Tam, but in exchange for the spinning bowl salad and one massive size of Prime Rib you probably shouldn’t be ordering, anyway, you’ll get one of the most unique dining experiences in Los Angeles. —Euno Lee

Sea Harbour: Before visiting Sea Harbor this Sunday, I had read a lot of doom and gloom about the weekend waits for their dim sum. When we arrived at 11 a.m., there was a crowd outside, but to our surprise, our party of three was seated within ten or fifteen minutes. Immediately after we did, a server walked by with a tray of barbecue pork buns, which we fell upon.

Sea Harbor is widely considered to be some of the best dim sum in Los Angeles, which makes it one of the best places to eat dim sum in the entire country. The scene on Sunday was lively but never overwhelming, with round tables full of multi-generational Asian families, from well-dressed grandmothers to green-haired teenagers. Lots of kids were playing Pokemon Go while waiting to be seated. (Turns out the restaurant's mural is a Pokéstop, which is a very 2016 way to convey that it's really an institution).

Dim sum is one of those meals I enjoy most in a big group, maybe with some mild research into the restaurant's specialities thrown in. That said, going in cold with two friends on a whim was still very worthwhile. Everything we ordered ranged from fairly good to truly magnificent. In the future I'd skip the cucumber salad, but the sesame buns were perfect contrasts in texture and my dining companions flipped out over every iteration of steamed buns we ordered. The real standout was the chicken congee, which was the most nourishing and flavorful rendition I've ever had, complete with nuggets of chicken to gnaw on. —Meghan McCarron